It seems as though whenever state governments jostle for the rights to stage an event of such magnitude, increased economic activity from interstate visitors – for the event itself and the implied longer-term boost to tourist numbers – rate highly among the touted benefits.

But in a year when the Palaszczuk Government is doing its utmost to keep visitors away with its hard border closures and 14-day hotel quarantine measures,  the tourism benefits are uncertain, at best.

But if you’re going to have a big dance, obviously you need some decent entertainment and some cracking tunes are one way the grand final could deliver a much-needed boost to the state  by showcasing the talent of some of Queensland’s world-class artists.

Staging a 100 per cent local line-up would surely rid organisers of any logistical headaches that might arise from booking interstate artists and besides, the risk-to-reward ratio of signing up a big-name international act just wouldn’t be worth the potential dividends in our annus horribilis. Let’s not forget Meat Loaf’s infamous 2011 set, which was so memorable for all the wrong reasons that he (eventually) apologised to “the people of Australia” and the AFL for it.

Next month’s grand final at the Gabba will be the first time it has been played outside of Melbourne and even if current social conditions were to prevail or be repeated, AFL fans would surely baulk at the idea of Queensland ever having it again, so we may as well make the most of it. They wouldn’t even contemplate Brisbane hosting the thing during the Lions’ three-peat premiership glory days in the early 2000s (but let’s not go there).

In terms of pre-match entertainment, my colleague Sean Parnell suggested on Twitter a couple of days ago that former Brisbane Commonwealth Games mascot Matilda – who has spent the past couple of years ignominiously spruiking a petrol station on the Bruce Highway near Gympie – could perhaps be wheeled of out of retirement for a victory lap around the Gabba before the game. 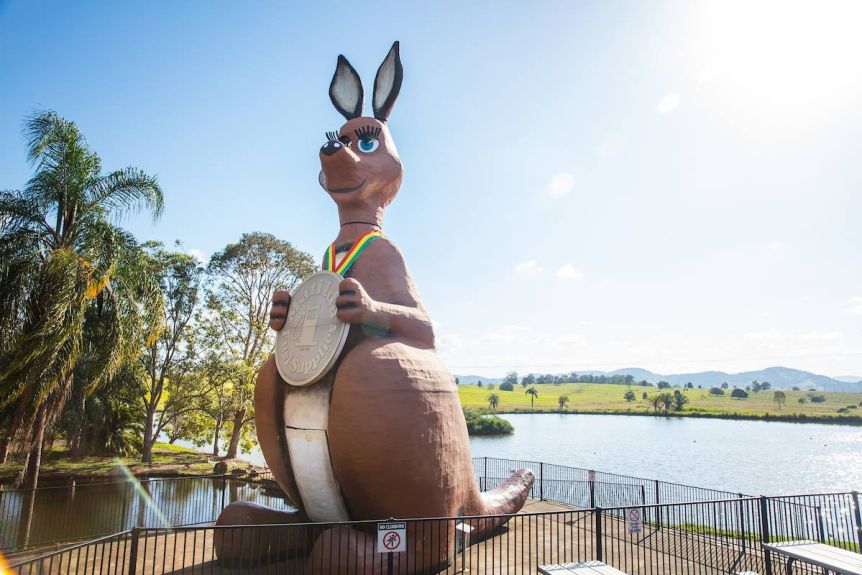 Matilda enjoying retirement at her namesake service station at Kybong, south of Gympie, in 2018. (Photo: ABC)

Matilda obviously made her public debut a short hop away at the then-QEII Stadium in 1982 and although I’m not sure what sort of condition she’s is in these days, even if she is a bit bruised, battered and weathered – or perhaps has a permanently half-closed lazy eye inhabiting the cavity that was once occupied by her winking one – she would be a fitting mascot for 2020.

Prying that fuel-retailer-emblazoned disc she’s been clutching for a couple of years from her paws, replacing it with a replica premiership medallion and sending her on a couple of laps around the perimeter for a proper send-off is the sort of riches-to-rags-to-riches story that would surely lift everyone’s spirits.

And surely having Matilda involved makes Violent Soho – whose four members are loud, proud southsiders who hail from the nearby Brisbane suburb of Mansfield – an obvious choice for pre-game entertainment.

After all, the band featured Matilda on the cover art of their 2016 single ‘So Sentimental’ and their latest album Everything Is A-OK – which the band has had no chance to perform live after their tour plans were scuppered in March – debuted at No.1 on the ARIA charts upon its release in April.

Several other local acts’ names have popped up in social media chatter as possible contenders, from Custard and Cub Sport to Savage Garden, The Saints, Amy Shark, The Chats and Thelma Plum.

Custard – whose four members packed their suitcases and headed south years ago – were recently forced to cancel their Brisbane Festival performance slated for later this month due to the border closure, which on the surface of things would make their inclusion seem unlikely. But the differences in economic scale between performing to a socially distanced Tivoli and 30,000 people at the Gabba would make a potential two weeks’ hotel quarantine a more viable option.

Savage Garden’s Darren Hayes and Daniel Jones live in separate states in the US – so they’re probably out of contention.

Music promoter Michael Gudinski, who also happens to be the producer of the AFL grand final’s pre-game entertainment, professed his admiration for Cub Sport when he spoke to InQueensland last month about the ABC-TV show The Sound, saying the band “just blew me out to be honest with you and there’s a few good things up in Queensland,” so they might be in with a shot.

And Thelma Plum – who was nominated for six awards at last year’s ARIAs, won album of the Year at the Queensland Music Awards in March and came in at No.9 in the most recent Triple J Hottest 100 countdown with the title track to her latest LP Better in Blak – is more than deserving of guernsey.

But following Powderfinger’s triumphant return for the socially distanced One Night Lonely online concert in May – which has had been streamed more than 800,000 times and raised almost $500,000 for Support Act and Beyond Blue since it debuted on YouTube – a groundswell of support has been building for the Finger to reform (again) for the occasion.

Powderfinger are an obvious choice for many reasons.  Firstly, getting an iconic band to reunite for the grand final always creates a buzz – as Hunters and Collectors frontman Mark Seymour proved when he got the band back together to perform ‘Holy Grail’  and ‘Do You See What I See’ before the first bounce of the Hawthorn v Fremantle grand final in 2013.

Powderfinger have also been tried and tested, having played before the 2008 Hawthorn v Geelong AFL grand final, performing ‘(Baby I’ve Got You) On My Mind’ and AC/DC’s ‘It’s a Long Way to the Top’ before the main event.

The band is also releasing an expanded edition of their most successful album Odyssey Number Five today to celebrate its 20th anniversary,

Powderfinger bassist John Collins said in June – when he was discussing the impending reopening of Newstead music venue The Triffid, which he manages – that the five-piece were closer than they had been in years after performing together (remotely) for One Night Lonely.

“The band’s been good, the dynamics are great,” Collins said. “We’re communicating really well, we’re laughing and everyone’s being co-operative.

“It’s great to have the whole team working together and in this crazy world of pandemic it’s been a really good thing to play and also have another part of my life that I’m very blessed to have and to be able just keep going and keep working at it and we’re really excited about Odyssey Number Five’s 20-year anniversary coming up.”

Collins was quick to point out that Powderfinger had no impending plans to reform for a permanent reunion but said “if we do do it, we’ll do it when we think the timing is right”.

Earlier this week, enterprising Brisbane music fan Brodie Russell launched an audacious change.org petition to get his preferred line-up, headlined by Powderfinger and featuring Brissie band Bugs and Thelma Plum, over the line and at the time of writing it was within striking distance of attaining its modest 1000-signature goal.

Do I pull the trigger on publishing this? 👀 @BUGS_band pic.twitter.com/iT1D5X7Nf6

“We are calling on Gillon McLachlan and Annastacia Palaszczuk to work together with those who decide to bring the spectacle of a Gabba Grand Final under lights the entertainment that it deserves,” the petition reads.

“I’m a huge fan of Bugs and basically as soon as the grand final was confirmed to be here the thought of them performing entered my head,” Russell told InQueensland.

“[Bugs singer and guitarist] Connor [Brodie] had also already mentioned on both Facebook and Instagram how much they would love to perform alongside Powderfinger, so firstly I just created it as a bit of fun and posted the draft of the petition to Twitter and Connor loved it, teased it in the comment section of their Facebook post and I decided to pull the trigger and launch it.

“As for the chance of it being successful, I guess originally I just figured it to be a bit of fun and a laugh and not much would come from it. It’s taken off fairly quickly though, so with a bit of leg work perhaps we’ll be lucky enough for it to actually have some impact on the decision.”

For his part, Brooks said he was happy to go along for the ride and unapologetically “just ride the coattails of Powderfinger”.

“Any little sprinkles of magic dust we get from those coattails would be great because they’re such a massive band and an iconic Queensland artist,” Brooks told InQueensland.

“To even be included in any conversation with their name is actually just an honour, as over-exaggerated as that might sound but yeah … having your band’s name mentioned in conversation with Powderfinger for me is pretty surreal.

“Anything that can come with it is cool and we’re really happy to see what happens because yeah, it’s a pipe dream but you never know, sometimes pipe dreams come off.”

And if Powderfinger are unavailable or unwilling to reform and perform for some reason and another headliner is needed, it’s worth pointing out that the Woolloongabba busway station is only about a 20-minute ride on the 185 bus from Mansfield.