None of the four members of Custard – who along with bands such as Powderfinger and Regurgitator were at the vanguard of the city’s ‘90s alternative rock boom – have lived north of the Tweed River for close to two decades, yet the descriptor “Brisbane band” invariably precedes the group’s name.

Glenn Thompson, Custard’s drummer, sometimes singer and over the past few albums, producer and engineer, understands and appreciates the band and its former hometown are inextricably linked.

“Look, it’s just what we are, I mean, nobody ever calls us ‘that Sydney band Custard’, do they?” Thompson laughed.

The former Brisbane-based band initially called it a day in 2000, bowing out with the sardonically titled compilation album Goodbye Cruel World, before reforming nine years later for what had been intended as a one-off performance for Queensland 150th birthday celebrations at Riverstage.

Several more “one-off” reformations followed before the four-piece – singer/guitarist David McCormack, drummer/singer  Thompson, guitarist Matthew Strong and bass player Paul Medew – convened in a studio for a weekend in February 2015 and laid down the foundations for Come Back All is Forgiven, their first album since 1999’s ARIA-winning Loverama.

The band have since brought out another studio album, 2017’s The Common Touch, as well as a 2018 live album (The Band – Live in the Basement), and on Friday, Custard’s third post-reformation album, Respect All Lifeforms, will be released.

When InQueensland caught up with Thompson and McCormack over the phone from their respective Sydney homes, the drummer was happily resigned to the fact Custard would always be “that Brisbane band” but he did admit to another bugbear relating to people’s perception of the group.

“It still happens, It’s quite funny … I was chatting to a guy recently and he said ‘weren’t you the drummer in Custard?’ And I said, ‘um, yes’. Then he said, ‘oh, I saw you guys play at GOMA recently’, and I thought, isn’t that funny?

“I was the drummer in Custard, but he saw me play a couple of months ago, so I think that’s just how it is. We were a Brisbane band,” he laughed.

“Oh totally,” he said. “I saw on our Facebook page last night, someone was saying ‘wow, you know they haven’t put anything out since ’99?’ And I guess people just don’t know – I mean, how would you know?” 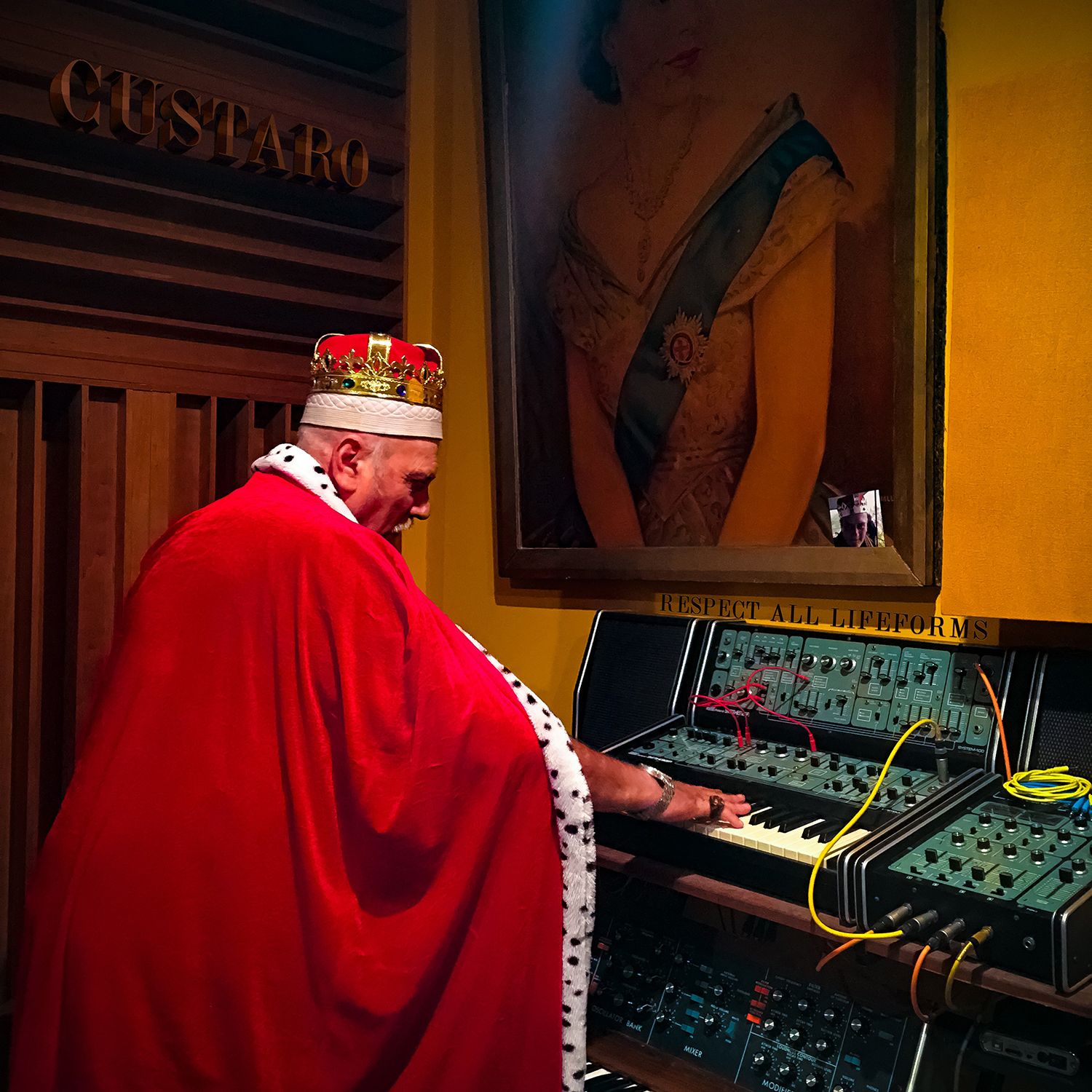 “Slacker” was another adjective commonly used to describe Custard during the band’s most prolific period from the early 1990s until their initial split in 2000. It was a descriptor intended to convey a similarity between the band’s hook-filled indie-pop and the lo-fi delivery to the musical style of bands such as Pavement but it belied then band’s tireless work ethic, which for several years consisted of an endless cycle of pre-production, recording, releasing albums and touring.

These days, it’s a tag that’s arguably more befitting, with Custard now playing only a handful of shows a year, and fitting in studio time when the members’ schedules align and they all happen to be in the same place at the same time.

“It was very opportunistic,” Thompson said of the writing and recording of Respect All Lifeforms, the basis of which was sketched out during a quick visit to Poons Head Studios in Fremantle.

“We were booked to go to Perth for a festival – we used to just fly over to Perth and then hop in a van and drive, normally just head straight down the coast to Margaret River to play a gig that night. But we thought ‘ah, we’re a bit old for that, so let’s fly there the day before’, and I thought, well, maybe we can just spend that day in the studio and see what happens.

“None of us had even talked about what songs we might have, I just thought if we spent time in a studio we’re bound to come up with something, and if we don’t, it’s no great loss, because this studio had such amazing gear in it, but it was really cheap because they just can’t charge as much as they used to be able to charge.”

The resulting album – which contains six of the songs the band sowed the seeds for during their one-day studio visit – captures Custard’s spontaneity, conviviality, melodic sensibility, wry humour and idiosyncratic charm more succinctly than any collection of songs the four members have recorded since getting the band back together more than a decade ago.

“We didn’t rehearse the songs before we recorded them they were all pretty much figured out in the studio together,” McCormack said. “It’s definitely my way to go, I like the freshness, just go in and see what happens.

“This one is a bit more spontaneous [than the previous two albums]. We’ve thrown extra stuff on it after the initial sessions, but this one just has a certain magic from that morning in Fremantle.

“The studio had a great vibe, it had tremendous gear, and it had some great characters, including a guy called Cowboy John, who was a friend of the studio owners – that’s a photo of him that’s gracing the cover of the album (pictured, above), playing synthesiser. As he left, he said, ‘respect all lifeforms’ and we all just looked at each other and said ‘that’s going to be the name of the album’. He just dropped in and bummed a couple of cigarettes and then he was gone, but he gave us quite a bit of information in that little time.

“We just recorded those songs over in Fremantle, and then Glenn and I took it back to our home studios and I came up with my vocal bits and he did his bits, then he did another song and then we got together, one more time, to do a cover version of [Camper Van Beethoven’s] Take the Skinheads Bowling – and then that was it.”

As Thompson acknowledged, the album – which opens with the song ‘Couple’s Fight’, has a single called ‘Funky Again’ that is accompanied by a video the band claims combines their love of “Jacobean architecture, social distancing, and late ’70s New York funk”, and a Medew number called ‘Wishing’, which contains the lyrics “I’m wishing my head wasn’t so full” – seems almost engineered for these socially restrictive times.

“Even the fact that we called the album Respect All Life Forms – it seems to be prescient, but it was totally happenstance,” he said.

Over the past two decades, McCormack has forged a successful career composing for film and television, writing musical scores for shows including Redfern Now, Rake and Jack Irish, and feature films including Top End Wedding and Garage Days.

For the past couple of years, he has also found an entirely new audience – and reconnected with a large segment of Custard’s ’90s fan base – after lending his voice to an anthropomorphic cartoon blue heeler.

McCormack’s character Bandit, the father of the titular blue heeler pup and her sister Chilli in the hugely popular, Emmy-winning Brisbane-produced ABC series Bluey, has been praised for his parenting abilities, with many taking to social media to praise him as an aspirational dad and Clementine Ford tweeting last year that she was “deeply attracted to Bandit from #Bluey”.

“It’s given me a completely new universe to exist in, it’s absolutely amazing, I really enjoy it,” McCormack said of the role. “They send me the scripts and the scripts are great – they’re always funny, they’re as much aimed at adults as they are the kids and it’s just an absolute blast to do it.

“It’s great fun and it’s not taxing timeline, it’s a couple of hours here or there and I get to have a giggle along with the scripts and as you say it’s a whole new audience, this Bandit Heeler character that sounds incredibly like me.”

McCormack said he had only been “recognised” as Bandit once in public, when a young woman and her children, who were standing in front of him at a Woolworths checkout in Western Sydney, heard a strikingly familiar voice from behind them.

“Her kids were looking at me like, ‘you don’t look like a cartoon dog. Why do you sound like a cartoon dog?’ But that’s the only time. I thought it would happen more, given the success of it – maybe when just self-isolation, social distancing is over I can get out into more shops and I’ll speak louder and see if more people recognise me.” 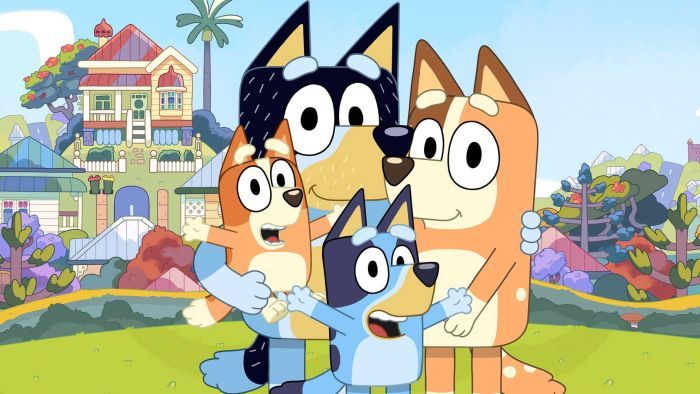 The band had planned to undertake a brief tour to launch Respect All Lifeforms but those plans are obviously on hold until social restrictions have eased to a point where hundreds of people are permitted to stand shoulder-to-shoulder in licensed establishments again.

With the members of Custard living largely separate lives when they’re not playing a show or recording together, McCormack said the time they did spend together while touring was “so much more enjoyable” than it was when they were spending months on end squeezed into a Tarago together.

“Instead of doing really long, gruelling tours and pre-production and recording and everything, now we just see each other when we’re going to do the occasional gig or a photoshoot and just say hi and it’s so lovely to catch up and then we all disappear back into our little hideaways. We’re not getting on each other’s nerves, so when we see each other it is genuinely a really great, wonderful time to – you know – just hang out.”

Thompson said he was also looking forward to Custard being able to showcase their new songs for live audiences, but in the meantime, he’s allowing himself to feel a sense of satisfaction for an album he’s proud of.

Custard’s Respect All Lifeforms (ABC Music) is out on Friday, May 22.