As opposed to the last time there was a ‘boarder ‘skirmish over Covid protocols – when isolated Queensland students were left in limbo due to home learning inconsistencies  – this time it’s NSW teenagers feeling the brunt.

But when they return for the resumption of classes in a fortnight they will have to quarantine in Queensland at their own cost for 14 days and learn online, not in a motel or hotel, but in a “stand alone dwelling”, such as a rented house.

Isolated Children’s Parents Association of Queensland vice president Wendy Henning said that would mean children, in most cases, would require a parent or guardian to accompany them.

The cost and time for many families, especially those from farming enterprises where harvest is about to start, will prove prohibitive, she said, where the winner will be Air BnB and others offering short-term emergency rental accomodation.

Other options may see kids staying in Queensland with family or friends or staying at school to avoid the quarantine demand.

“There’s a real possibility that some children will be away from their homes for 23 weeks, from the June-July school holidays to the Christmas break,” she said.

“That’s potentially a very big toll on a lot of people’s emotional health.”

Instead, Henning would like “common sense” applied to the protocol, particularly as many children will be returning to properties that are isolated in environments where social contact is contained to the farm and movement is limited. 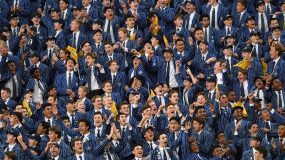 Our other 'boarder' restrictions: Country schoolkids left in limbo

“We understand that we’re in a very different environment last year with the Delta strain being so much more contagious,” she said.

“Last year children could go home to their isolated properties and return to school without the need for quarantine.

“This time we’re asking the government to consider the same but with a testing regime put in place to ensure that children are clear of Covid before they return to boarding.

“Vaccination status could also be taken into account. For context, the government could look at a similar process to how they are currently handling track drivers moving between NSW and Queensland.

“What we want to avoid is having children locked away in an unfamiliar environment for 14 days before the start of the school term.”

According to the National Heavy Vehicle Regulator, truck drivers can move between NSW and Queensland without the need to quarantine if they comply with a testing regime and can provide evidence of vaccination with the use of vaccine certificates.

A Queensland Health representative told InQueensland that departmental heads were looking at building some flexibility into the system, but declined to elaborate on a timeframe for when a new approach to the current protocol would be applied.

“A new digital home quarantine trial may be rolled out to some families in this cohort where a program will be used to assist with managing the quarantine requirements such as check-ins and testing reminders,” they said.

“The system is in development and more information will be available soon.”