With its headquarters at the University of Queensland’s St Lucia campus and 13 regional sites state-wide, the organisation better known as QAAFI (pronounced quaff-ie), welcomes a new director today (February 15), following the decision of its founder, Professor Robert Henry, to step back from frontline management late last year.

The arrival of Professor Matthew Morell from the Philippines, where he was director-general of the International Rice Research Institute, marks the next phase of QAAFI’s evolution from a start-up 10 years ago to an internationally recognised research body on the cusp of delivering new innovations ripe for commercialisation.

Morell has stated his intention to drive QAAFI as the lead vehicle to propel UQ as the world’s leading university for agriculture and food in sub-tropical and tropical regions.

Henry, who has stepped back to focus on his own research projects, told InQueensland that the pipeline from scientific discovery to market realisation was long and unpredictable, but the timing was now about right for some of those projects under QAAFI management to generate commercial interest with lucrative contracts.

“Some of the projects we have in development could lead to very big outcomes,” Henry said.

“It’s not a question of if, but when, and that’s no accident. You always have to keep an eye on the market and review who the customer is and what they want.

“Unless you’re doing that you really run the risk of producing something that’s not needed or missing the opportunity to extract value.”

One of those projects with a long pipeline but potentially massive rewards at the other end, is the drive to create macadamia nuts with thinner shells and a larger kernel.

Started more than 25 years ago, the project’s aim is to increase yield, while still maintaining a tough enough shell to resist pests and diseases.

Funded by the Queensland government, it’s important work benefiting the crop native to south-east Queensland, given researchers estimate the macadamia is currently yielding 30 per cent below its potential, yet remains Australia’s second biggest nut export projected to be worth $350 million annually by 2025.

Funding for QAAFI projects comes via a mix of public and private money.

The Queensland Government is a major backer, but so too is the Bill and Melinda Gates Foundation, which has invested $4 million in 2013 to improve sorghum productivity under drought conditions and further funding last year to accelerate fertility gains or ‘hybrid vigour’ from sorghum and cowpea seed.

The project is expected to be game-changing for farmers in developing countries, but will also assist farmers in Australia to lower planting costs and improve crop yield on soils compromised by variable climate. 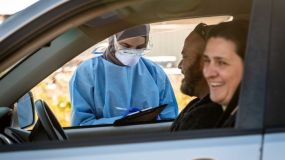 Another project based on the discipline of nanotechnology, the science of combining engineering and technology at the minuscule scale, harbours the potential to produce food crops capable of self-resisting plant diseases and pests, all but eliminating the need for chemical crop protection agents such as insecticides and herbicides.

Nanotechnology brought success to QAAFI in 2011, with the creation of the world’s first vaccine for Bovine Viral Diarrhoea Virus, known in the livestock industry as BVDV.

Since its inception a decade ago to bolster falling government spending on science by harnessing the relationships between the public, private and university sectors, QAAFI has identified projects with “global significance and local relevance”, according to Henry.

“This was particularly relevant for Queensland, which has always invested strongly in agriculture due to the fact the industry remains critically important to the State’s economy,” he said.

“Agriculture in Queensland is diverse, possibly more diverse than anywhere else in Australia.

“There are a lot of sub-tropical and tropical crops you can grow in Queensland that you can’t grow anywhere else.

“That alone is unique, but there aren’t other developed countries with these types of environments.

“You can do research on crops in sub-tropical and tropical environments elsewhere in the world, but they won’t be in first-world countries with modern farming systems, equipment and developed infrastructure.

“That’s what makes our research world-leading and highly sought at the international level.”