The pictures, which show green shoots bursting through the burnt and battered landscape, were far from easy to capture.

“You basically have to go bush.

“You’re covered in black charcoal because everything is charred.

“Everything you touch has black charcoal on it.”

The new growth is a promising sign, but environmentalists are now on high alert for “opportunist” pests and disease that could stifle it. 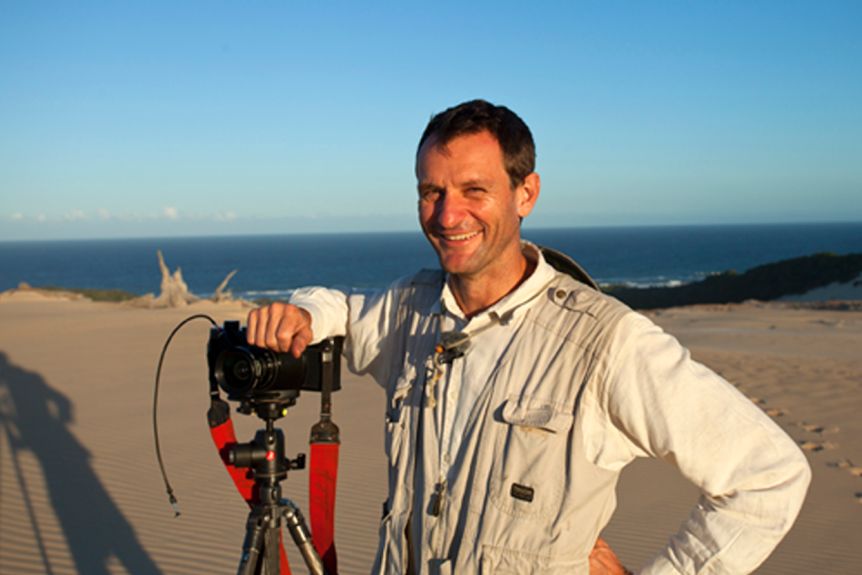 Meyer, who has been exploring the island since he first took a job as a tour guide 25 years ago, has taken “a keen interest in the regeneration process”.

He said K’gari’s diversity drew him in, from sand dunes to freshwater lakes, beaches and rainforest.

“There’s a particular plant that regenerates really quickly in swamp areas called sundews and they are insect-eating plants which are unbelievably beautiful,” Meyer said.

“At the moment, bracken fern is dominating on the forest floor.

“In the sclerophyll forests [there are] eucalypts, wattles and banksias, and also grass trees. They are the first to come back after fire. They love it. They thrive.

“You walk through some areas, and you didn’t think there were that many in the world — just an ocean of grass trees.”It’s amazing.”

Coastal varieties like casuarina and pandanus had been hit harder by the fire, he said.

Meyer said his drone was a “handy tool” that provided a bird’s eye view of the bush.

“I have used a plane, but I get pretty badly motion sick,” he said.

“Especially if you’re looking through a lens, as soon as it starts wobbling. I can’t handle it,” he laughed.

“If you use a drone, you can get to places that are hard to access.” 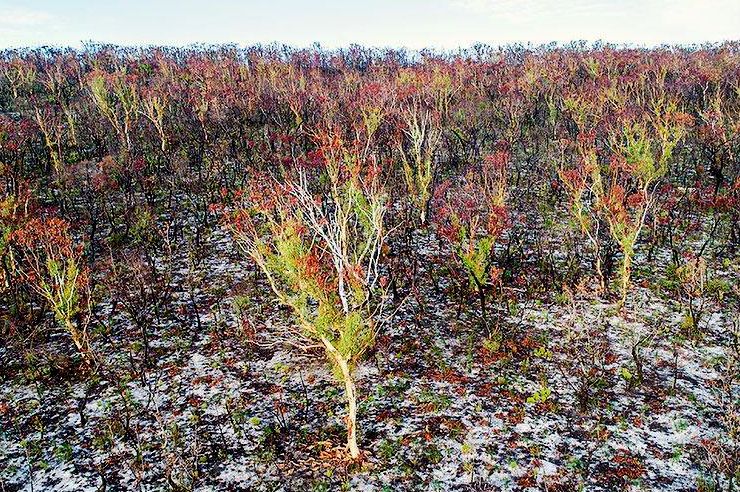 “It’s at this time we really have to watch out for the opportunists: the weeds, the pests, and all the other diseases that may take advantage,” Fraser Island Natural Integrity Alliance chair Sue Sargent said.

She said a lack of biosecurity on the island was a concern.

“In any world heritage site where people come in and out you are going to get weeds and pests. There could be seeds on your clothing,” she said.

“We could see pests and diseases brought onto the island and even spread around as people investigate those areas.”

Sargent said myrtle rust was one of the most significant threats. It was first detected on the island six years ago.

She described it as “another pandemic”: “It’s airborne and spreads from plant to plant fairly easily”.

“Myrtle rust, in particular, loves epicormic growth, which is that green flush you get on the new sprouts of trees after they’ve been burnt.

“The spores get into the plant, and the demise starts from there.”

She said groups like the Butchulla Land and Sea Rangers, together with the State Government, had been monitoring pests like myrtle rust as well as the severity of the burn across the island and the fire’s impact on K’gari’s cultural heritage.

“We have some areas that barely seemed to have been touched; and other areas that have been burnt right down to the humic layer,” she said.

“You’ve almost sterilised some areas of the vegetation, and it will be near impossible for those areas to come back.

“It will be a mixture of winners and losers.”

Sargent said work had already begun to fight myrtle rust and protect the island’s ecosystem in the long term, by collecting seeds and carrying out resistance trials on different types of bushland.