In all her 84 years, Alpaca farmer Harrison had never set foot in a courtroom — but that changed when she took on a powerful coal mine.

Now the president of the Oakey Coal Action Alliance (OCAA), Harrison is well-acquainted with the law.

This week the OCAA won a High Court of Australia appeal against the New Hope Group’s proposed expansion of the New Acland coal mine.

But the decades-long battle is set to continue, with the High Court sending the matter back to the Queensland Land Court for fresh hearings. 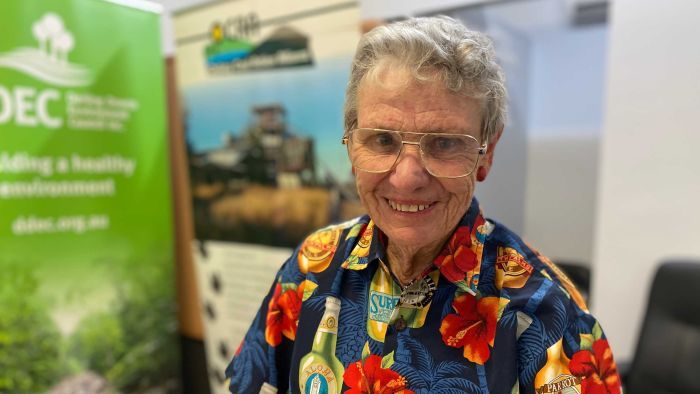 Aileen Harrison turns 85 next month, but says she won’t give up the fight. (Photo: ABC)

Harrison and her husband moved to the Oakey area 23 years ago and built the home they planned to spend their retirement in.

Harrison blamed the proximity of the mine for the illness that plagued her family and said she was left with no choice other than to sell up to the operation’s owners.

“So we’ve lost the whole of our home we built, plus our retirement, because we fought this the whole time,” she said.

“I’m still in shock, to be honest, but I’m terribly relieved,” she said. “I would think that as soon as I can really absorb it … I’m going to be be overjoyed.

“It’s really left it too late for for our retirement, but at least we’ll know that there’s something left for our grandchildren and the future generations.”

Despite the win, Harrison was reluctant about heading back to the Queensland Land Court, having endured a 100-day hearing in 2016.

“I had never had my head inside a courtroom … until the start of this and I haven’t really liked the courtroom all that much,” she said. “But I’ll go back if we can still finish this off.

“I’ll just go home now and get back into some work back on the farm, I guess. Every day is just about the same on the farm.”

The reaction to the High Court’s decision at the New Acland mine, however, has been “pretty sombre”.

Worker Glynn Marshall survived the first round of redundancies, but said the past year had been “very up and down”.

“It’s very hard to go to work and go home from work not knowing that you future is there,” he said.

“I’ll probably have to go away for work, so we’re probably no better off as far as a family goes.”

He said he felt “helpless” and did not know if he would be able to keep living in Oakey.

“Your future is in the hands of the courts, it’s in the hands of politicians and there’s not a whole lot you can do about it. “You like to control things in your life, but this is totally out of control.”

The CFMEU’s Michael Hartin said he expected consultation on future job losses would begin in the “near future”.

“I know every single one of them and their families — they are all locals,” he said.

He said of the 150 people made redundant from the mine so far, none had been able to get work in the green energy sector.

“Coal is going to be needed for a very long time to come,” he said. “At the moment, the jobs in renewable simply aren’t there.”

The OCAA said it would write to New Hope Group asking for an agreement not to challenge any Land Court rehearings.

“If New Hope commits not to appeal the outcome, will give the same commitment,” secretary Paul King said.

King said the Land Court would meet next week to discuss the High Court’s decision.

New Hope Group said it had not received any correspondence on the matter.