The category five system spanned 650 kilometres and recorded gusts of up to 250 to 295 kilometres per hour when it crossed the coast at Mission Beach in the early hours of February 3, 2011.

The system lasted another four days and caused an estimated $3.5 billion in damages as it moved west, eventually petering out near Mount Isa.

Incredibly, just one death was attributed to the super storm.

A decade on, Yasi has left physical and emotional scars on the towns and people who felt her fury and the memories are still raw, particularly during this year’s already busy cyclone season.

Alister Pike grew up around Mission Beach and is a veteran of four cyclones. As Yasi approached, he remembers being called on by local police.

“I was deputised to go and order people to evacuate their homes which was a little bit confronting,” Pike said.

“People you’ve known for many years, you couldn’t mince words, you had to tell them that they were ordered to leave by the Queensland Police Service, and of course that gets a fairly confronting response from some people.”

As night fell, Pike bunkered down at the local police station with other evacuees, some of them experiencing their first cyclone.

“I think they thought it was going to be a bit of a party but by 10:00pm it was anything but a party,” he said. “It was howling, that wind, and scary … it was like a wild animal coming to get you.

“I can remember the big windows in the police station bowing and I’m thinking, ‘man, I hope that glass holds’, but it did.”

His thoughts turned to his own beachfront property but he’d already given up hope on the family home.

“We had a report that the tidal surge was estimated at 9 metres and I thought, ‘well, that’s my house gone’ which was a bit confronting.”

Miraculously, the house survived but Pike, like all of Mission Beach, faced a massive clean-up.

“I had every coconut from Vanuatu to Fiji and beyond in my front yard at the time, along with all the pumice.”

Dunk Island sits just off Mission Beach and for decades was a world-renowned holiday destination.

Pike, who has run a fishing charter business for decades and served as a local councillor, laments the resort’s loss which he believed was inevitable.

“[Yasi] put it out of its misery at the time because it was really struggling,” Pike said.

“Tourism in Queensland was doing it really tough and I think it put it out of its misery.

“I think the legacy 10 years later is that Mission Beach has learnt to evolve as its own destination, it’s not just a step-off point to go to Dunk Island anymore, it’s a destination in its own right. 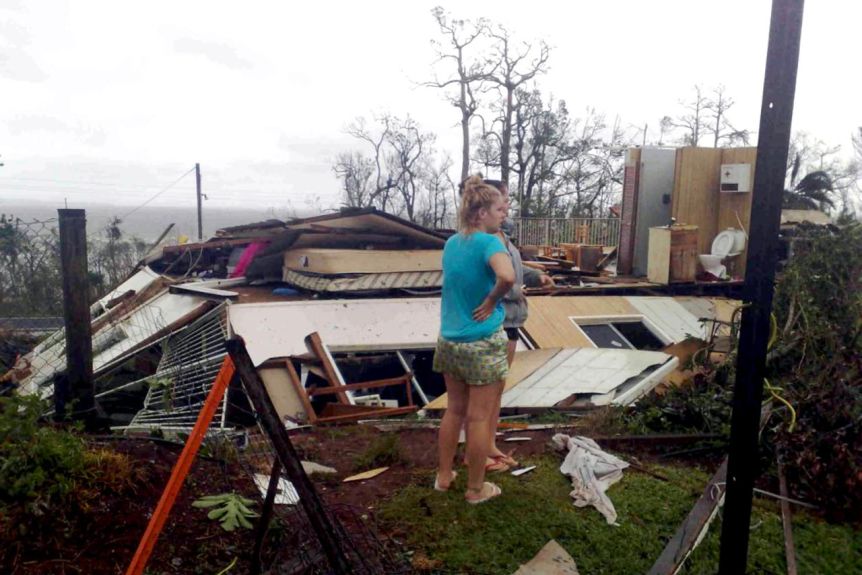 Mission Beach residents survey the remains of their home after Cyclone Yasi battered the north Queensland town on the night of February 2, 2011.(Supplied: Andrew Sittler)

“We were addicted to Dunk Island before Yasi and we’ve shaken that addiction; now we can do it ourselves.”

Ron Hunt has lived in Tully his whole life and is no stranger to cyclones, but he remembers Yasi had him anxious as it approached through a valley known locally as “the window”.

“It did have some ominous signs and it seemed to be coming pretty direct which was a worry,” Hunt said

“It came in at ground level, it was coming from the south; we were prepared but not for how wild it was.”

Howling winds were followed by an eerie calm.

“The scariest part was when the eye went through,” Hunt recalled.

“The stars were out and it looked like another night in paradise, in the eye, and then all hell broke loose again when it went past.

“I’ve been through a few cyclones and that one would’ve been the scariest for noise — it sounded like a heap of banshees, the wind was terrific, and anything that came loose, you could hear it.”

“The wind was so severe, you could hear it blowing up through the floor, that’s frightening because you think the whole place is going to explode,” she said.

As Yasi bore down, the town’s Senior Citizens Hall had been established as an emergency shelter and was already filling with evacuees from nearby Tully Heads.

Volunteering as a Red Cross disaster officer, Byrne made an instinctual, life-and-death call.

“I made the decision to relocate the residents from the Senior Citizens Hall up to the Red Cross Hall,” she said.

“Looking at the condition and the age of Senior Citizens Hall, I thought it may not stand up to it, being a timber building. 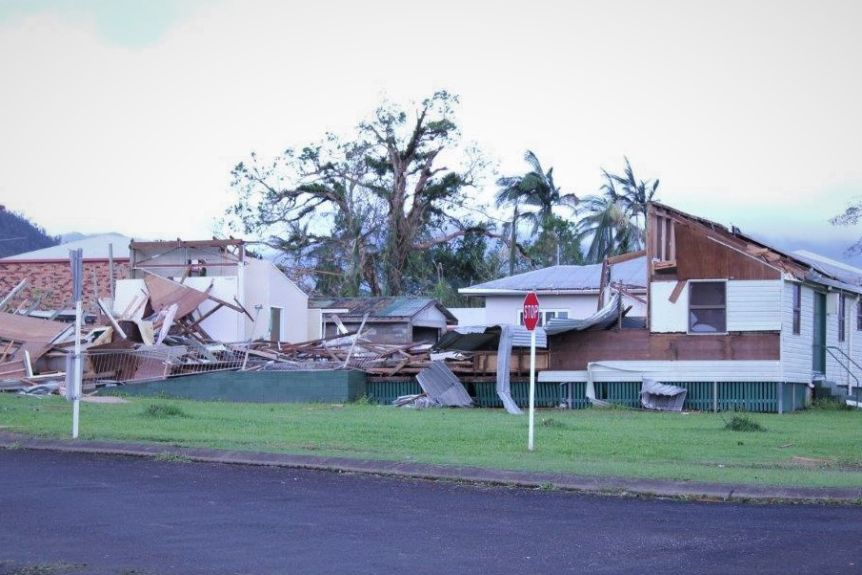 Tully’s Senior Citizens Hall was demolished by Cyclone Yasi only hours after evacuees taking shelter there were moved.(Supplied: Ron Hunt)

“It was just a gut feeling I had … I felt it was safer and then during the night, the Senior Citizens Hall was demolished.

“I’m grateful that I did take that initiative and move those people, otherwise we would’ve had a loss of lives.”

Byrne had her own near miss during Yasi when a neighbour’s tree came crashing down.

“Fortunately it went the other way over the house,” she said.

“Had it been this way, it would probably have killed the four of us that were in the house, it was very frightening.”

Tully was shell-shocked and 10 years on, the small rural town is still recovering from the exodus caused by Yasi.

About 40 properties were demolished and around a third of the population didn’t stay for the rebuild.

“On a conservative estimate, we lost 1,500 citizens out of Tully alone,” Hunt said.

“The schools had a big decrease in their numbers; the schools then lost teachers because they didn’t have the numbers.

“And then without the population, the butcher, the baker and the candlestick maker, they all lost customers and I dare say we haven’t got that number back yet.”

Hunt said the scores of still vacant blocks scattered through Tully were the “physical scars”.

“There’s a lot of human scars too,” he said.

“Ten years is a long time but it doesn’t take much to trigger off what happened.”

Byrne was involved in the community relief efforts to help Tully residents get back on their feet but many were forced to leave.

“Families were having to leave the town because there was no work available for them … it’s sad that we’ve lost so many,” she said.

“You go down the main street, you’ll still see a lot of empty shops.

“It’s sad because it’s very hard to get these businesses up and running again with the economy 10 years down … we’re still struggling.”

The Tully Valley is Australia’s largest banana growing district, worth billions of dollars to the regional and national economy.

Yasi flattened it in a matter of hours.

Banana farmer Cameron Flegler remembers the sense of dread he felt as the warnings began to come through over the radio.

“We knew for about two days, it was going to be trouble,” he said.

“The size of the system was immense — huge — so there was no way of getting away from it.

“Even if it was a close call, it was still going to smash us into smithereens.”

Flegler and his crew of workers salvaged what they could from the trees and then bunkered down for the tropical onslaught that still lives in his memory.

“That night, you’ll never forget it if you lived through it,” he said.

“Everything’s shaking — I live in a besser block house and it was shaking — an amazing amount of noise … it’s like a jet engine ripping.”

Consumers bore short-term pain as the prices surged to $12-per-kilogram but Mr Flegler said the local industry was changed forever — there were winners and losers.

“There’s been a shift in the growing area, it’s expanded a lot out [to the Atherton Tablelands where it’s] a bit more cyclone-tolerant,” he said.

“Some small farms never came back and you’ve seen other farmers have got bigger, some switched crops, some went back to cane.”

The Flegler operation had 240,000 trees standing before the cyclone; Yasi claimed all but a handful.

“When I came through the next day, there were half a dozen trees that stood out like a beacon because there was no green that was elevated,” Flegler said.

“Everything had been stripped, every tree on the creeks, in yards, houses, all the bananas were just a flat-level, green mess.

“[But] here were these trees sticking up which was amazing.

“I called one ‘Sharon’ after one of my mate’s mums because I reckon she’s a pretty strong chick.”

The primary producer says the pain of Yasi is still being felt 10 years on.

“From infrastructure, to residential housing, to people who left, to when I pay my insurance bill, it’s left a lot of legacies behind.”

Cardwell also bore the wrath of Yasi which damaged 75 per cent of the town’s buildings and destroyed the Port Hinchinbrook Marina.

A decade on, the marina rebuild remains in limbo.

In the cyclone’s aftermath, former Cardwell Coastguard member Neville Goggi described a “tangled mess of boats” in the marina where 150 vessels were piled up; an estimated $50 million in damages.

“My heart just sank, we knew the people who owned those boats … some of the old people, their homes were their boats, they lost everything.

“To this day now in Cardwell, we’re still feeling the pain because we’re still trying to get [the marina] up and running again.

“We need the marina going again for Cardwell to survive because the main industry in this area is fishing — it’s the lifeblood of the town.”

Goggi says Yasi “took the cake” and he remembers the “frightening night of green lightning and horizontal rain” which extensively damaged his house and cut Cardwell off from the power services and access for days.

He was doing community bread and milk runs in the “tinnie” to Tully and while it was three weeks before he had a hot shower on top of the stress of insurance claims, Goggi fondly remembers a resilient town effort during the clean-up, rebuild and recovery.

“It makes everyone think how short life is,” Goggi said.

“We’ve got a very community-minded town where we all get in, we all help each other, put the differences aside and get the job done; that’s more important than worrying about yourself.

“Yasi tried to break us but we won.”

The La Nina summer has already made the 2020–21 Australian region cyclone season a busy one with 13 tropical lows and four cyclones so far, including ex-TC Kimi which at one point was headed toward the Cassowary Coast.

The survivors of Yasi admit to being nervous.

“I’m a veteran of four cyclones and I don’t want to see a fifth,” Pike said.

“Anybody that doesn’t get a bit of trepidation if they announce a tropical low forming out in the Coral Sea and in our vicinity, they’re dead from the neck up.

“But, we’ll just deal with it. We choose to live in the wet tropics, cyclones are a phenomenon.”