Scott Morrison’s first agenda item after his summer holiday was not a return to dealing with the coronavirus crisis from the confines of Parliament House, but a tour of outback communities trying to bounce back from years of drought and the devastating 2019 floods.

His arrival to the Winton Saleyards on Tuesday afternoon coincided with a sun shower — a momentary reprieve from the dry that is far from over.

The Prime Minister, alongside several coalition frontbenchers, has been visiting towns across regional Queensland that have upgraded infrastructure with funding administered by the National Drought and North Queensland Flood Response and Recovery Agency.

“I’ve been keeping up to date through all the reports I get from agency coordinator-general Shane Stone, but I wanted to see it,” Morrison said.

“It’s really quite moving to see how the communities have sustained themselves and the resilience has paid off.” 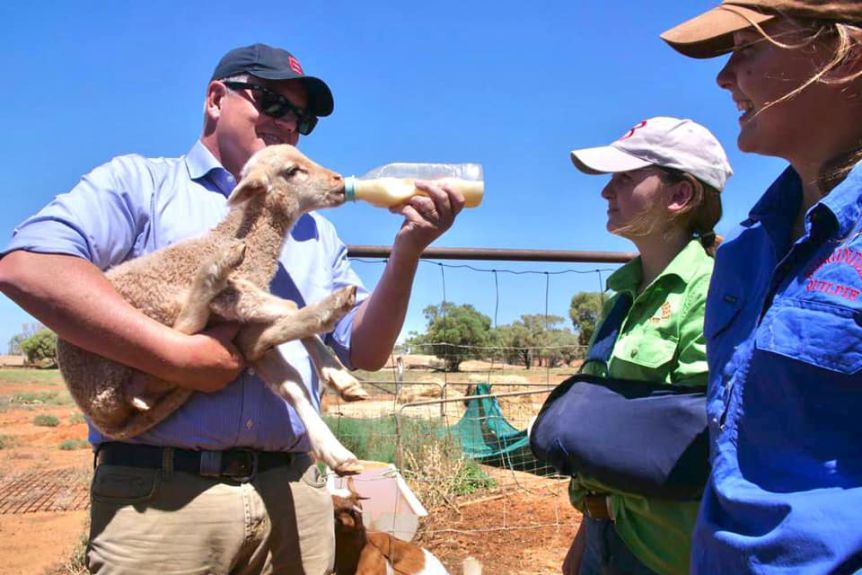 The western Queensland trip finished in Cloncurry, one of the main centres impacted by floods and a cold snap that killed more than half-a-million head of livestock in 2019.

The Prime Minister has become well acquainted with the area, visiting three times in the past two years and making video calls to the mayor Greg Campbell.

Campbell said it was an opportunity to reiterate the need for ongoing support after the floods.

“This year is probably one of the first years where the loss of cattle is going to start impacting the bottom line,” he said.

“The industry has shown how tough it is, and with a bit of support, how quickly it can bounce back.”

Campbell said he would like the government focus on developing water resources for cropping and mining.

“We’ve got hundreds-of-thousands of acres of arable soil, we’ve got ample sunshine, and we’ve got the strong backs to actually pull all those things together,” he said.

“We need our politicians to give us a hand and remove all the roadblocks.”

He last visited the station two years ago, and the station’s Stephen Tully said the difference in the land this time was a great sight to see.

“The country was at its absolute worst, it was red on the ground and red in the sky as well from dust,” Tully said.

“Now the air is clear and there’s a lovely green tinge, predominantly herbage with grass underneath, as far as the eye can see.”

Tully said the property had strong lambing numbers this year, in part due to an exclusion fence that was installed with federal government assistance.

“The fence has absolutely paid for itself and that was our message today — we would not be here without the fence, we could have had to sell out and go,” he said.

Morrison said a silver lining of the coronavirus pandemic was that Australians had opened their minds to living regionally.

“More Australians have probably got that there are opportunities in regional Australia that they probably just never even bothered to look at before,” he said.

“When things are going well for them in the cities, the idea of moving to a regional area and living there … it just never got on the horizon.

“I think now, with the events of what’s occurred in the past 12 months, has caused a number of people to stop and think about that. So there’s a window, there’s a door to go through.”

But the Prime Minister would not be drawn on whether the Government would help facilitate a mass tree-change by ensuring regional services and infrastructure were adequate.

“I don’t think we’ve hit that yet,” Morrison said.

“That would be a nice problem to have, in some respects, that the demand would be that great.

“I think it’s going to continue to be an ongoing challenge for us.

“I’m not making any wild promises there, but that is a key area of need.”