On Monday, the Maranoa, Warrego and Central West regions recorded some of the highest above-average temperatures.

He said the trough should move east towards the Darling Downs today, bringing heat and humidity.

“These areas through the Darling Downs and through southeast parts can still expect temperatures around 5 to 7 degrees above average,” he said. 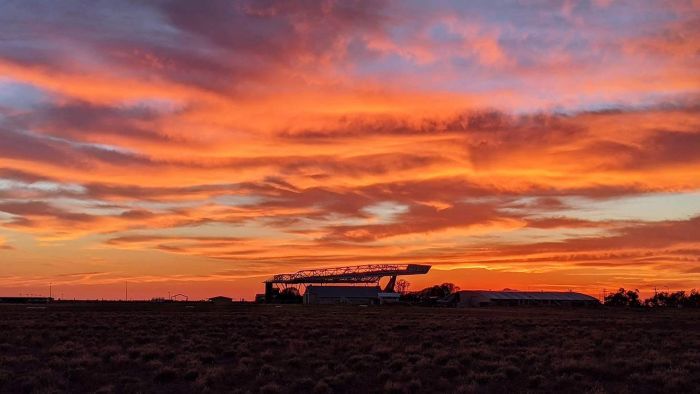 Sunrise at Longreach near the Qantas Founders Museum where the temperature had already reached 26.4C just before 6:00am. (Photo: ABC)

But a slight reprieve is not far away with temperatures expected to dip in the west in coming days.

“You’re getting down to temperatures around the high 30s rather than into the 40s through the Maranoa and Warrego, still getting up [to] 41 around the Longreach and further north, into the north-west,” he said.

“A little bit of relief but not significantly so, but still getting 5 degrees cooler than what they had.”

Storms expected across the state

The southeast can also expect a bit of relief from the humidity of the past few days, with cooler air pushing up from the south.

Lombard said this will continue moving up towards the Wide Bay and Capricornia regions over the coming days.

“Unfortunately, not really giving much of a relief to the inland guys — most districts inland are still seeing some warmer temps, still sitting around that 3 to 5 degrees above average as we continue through the rest of this week,” he said.

Several storms are also developing across the state, but Lombard said they are not likely to bring heavy downpours.

“From Charleville to Longreach up to the northwest, there’s been some storms firing up,” he said.

“Nothing too significant with rain, unfortunately … most of the storms have been pretty high-based.

“As it’s approaching the south-east, we see some storms extending to the southeast coast as well.”

Lombard said storms across the Wide Bay and Burnett districts were likely to bring up to 35mm of rain, bringing relief to the fire effort on Fraser Island where large areas of bushland have been burning for a month.