Passenger security screening ceased at Longreach Airport on Sunday and at Barcaldine Airport in August.

It’s a move that will be replicated at a handful of other regional airports under new federal regulations, which will commence on December 19.

The Department of Home Affairs, which is responsible for administering aviation security legislation, has undertaken a review of the risk profiles of the nation’s airports.

As a result, a new “tier” framework is being introduced that will re-categorise airports based on their security requirements, and see some lose security screening while others will be required to increase security measures.

The ABC understands around six more regional airports will cease screening under the new regulations, and 13 airports will be required to upgrade security arrangements.

In a statement to the ABC, a spokesperson from the Department of Home Affairs said the new framework “better reflects the operational diversity and range of security risks faced by Australian airports, while recognising the changing security environment”. 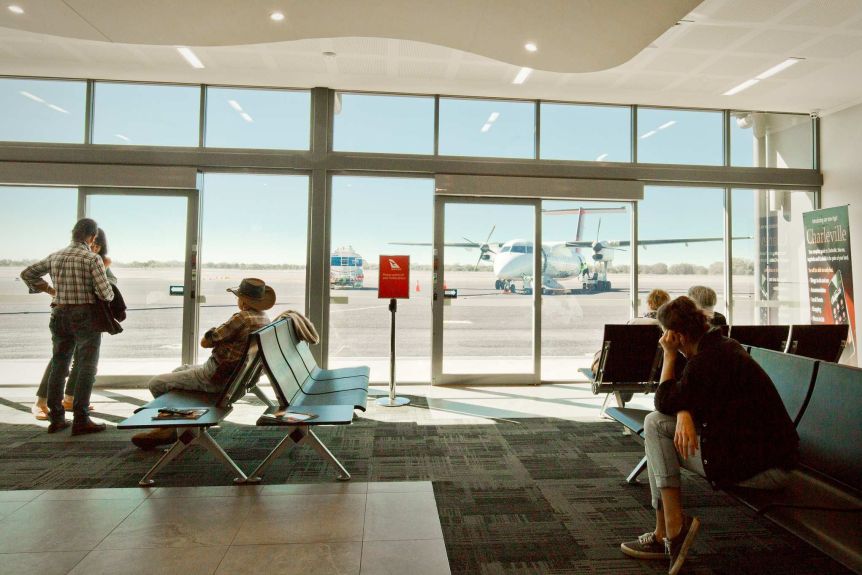 Passengers at some regional airports will no longer be security screened. (Photo: ABC News: Mary Lloyd)

The ABC understands Queensland Airports Limited, which owns and operates Longreach Airport, sought an exemption to cease screening early, from November 1, due to the expiration of its security contract on October 31.

A similar exemption was sought by the Barcaldine Regional Council to cease screening when flights to and from the town’s airport resumed in August following Queensland’s COVID-19 lockdown.

Both exemptions were granted by the department.

John Coyne, the head of strategic policing and law enforcement program at the Australian Strategic Policy Institute, said the decision to downgrade an airport’s security was based on a strategic calculation.

“First off, risk: the likelihood and consequence that something will happen and, secondly, threat: the capability and intent of those who do us harm to actually do that harm.”

Coyne said the risk of security being compromised at an airport like Longreach was low.

“The reassessment certainly for Longreach airport is really looking about what level of scanning and what level checking of passengers entering and exiting the airport is required,” he said.

“Does every piece of hand luggage for someone travelling out of Longreach to fly to Brisbane need to be scanned?

“And I think the answer to that will be no.

“The likelihood that a terrorist group will try to stage an attack through a small country town or a regional airport is significantly lower than what you’d find, for instance, in Sydney, Melbourne or Brisbane.”

Security measures still in place, despite no screening

Longreach Mayor Tony Rayner said he had confidence passengers departing Longreach would not face any greater threat now that they would not be screened.

“[The] decision is not made lightly,” Rayner said.

“We can place confidence in the Federal Government having done that risk assessment, that they have measures in place throughout Australia to ensure that the removing of the security systems at regional airports doesn’t constitute a risk to the general public and to travellers.”

David Bezuidenhout, the CEO of the Cloncurry Shire Council, which operates the airport, said the council had been planning to upgrade security screening, but the Federal Government’s review later determined the measures were “no longer required”.

“The basic equipment that we’ve had in place for screening and for explosives testing will now be removed,” Bezuidenhout said.

Bezuidenhout said the council trusted the experts and was not overly concerned about the changes, but eight jobs would be lost in the process.

Up to four of those employees will be upskilled to take on the role of security guards, to maintain some level of security oversight on ground.

The department said the removal of passenger screening equipment at some airports did not mean passengers at those airports would go unmonitored.

“The department works closely with airport operators to ensure that appropriate security measures are in place to protect publicly accessible areas at airports,” a spokesperson said.

“While security screening is the most visible security measure, it is not the only measure, and commercial flights departing regional airports are subject to numerous security controls.”

Compulsory airport security measures mandated by the Federal Government have caused controversy in recent years because of the crippling costs they have placed on local airports.

Rayner said the removal of security requirements would lead to a clear financial saving.

“Month by month it’s a big cost for every airport operator,” he said.

“It frees up a bit of space as well in the facility, so it will be a welcome decision for all the airport operators whether they be local councils or privately owned.”

Coyne said the new framework was a commonsense approach balancing risk against cost.

“There’s been this sort of big push to increase security, [but] the challenge over the past sort of eight months … has been that perennial question: who pays for it?”