Operating at the bottom of the labour market can have its upsides.

Take working on a farm, for example. Wide open spaces, tilling the earth, tending crops or working with animals under the sun and plenty of fresh air.

In a COVID world, it’s just what the doctor ordered. No wonder these backpackers are smiling.

They are gathered on the stone-fruit orchard of Rosemary Hill at Pikedale, 30 minutes from Stanthorpe, where I spent time on Saturday working as a fruit picker – the job that apparently so many Australians are reluctant to take on.

The farm is a family operation, owned by Gus and Paulette Ferrier, where harvest of their 18,000 nectarine trees started on October 15. They will continue picking until December.

Gus Ferrier, who is also the president of the Granite Belt Growers Association, spoke to me two weeks ago confident he had the workforce in place to strip his trees and pack the produce, ultimately bound for the large supermarket chains.

Like Queensland’s successful containment of coronavirus, Gus “went hard and went early” when sourcing his farm labour as the pandemic closed borders and restricted the industry’s flow of farm workers from overseas.

“I started looking in April when I could see what was about to hit the fan,” he told me again this week.

“My first strategy was to call my labour agent and ask who’s worked for me before, were they a good worker and were they available again.”

Based on that criteria, six of his current crew of eight are returned staff, all working on the Ferrier property last year.

Despite leading an organisation that currently has a promotion called The Harvest Army, in a bid to recruit more Australian farm workers to fill the foreign backpacker pool, Gus’ crew are all from Europe or the UK.

“I’m not going to discriminate,” he says. “All I ask for are people with a reasonable level of fitness, with a good attitude and who are prepared to get stuck in and do a fair day’s work for a fair day’s pay.”

Gus also has a preference for tall people. Nothing against those who are vertically challenged, but the height requirement matches the structure of the orchard.

With trees not much higher than 6-foot (in the old money), the farm is what’s known as a pedestrian orchard. That means machines and ladders aren’t required by workers to thin trees and harvest fruit.

Eliminating ladders from the operation has made it a much safer workplace, while increasing the speed at which fruit can be picked.

Gus estimates his harvest costs have reduced by as much as 40 per cent since tossing the ladders four years ago.

While other horticulture crops like strawberries and mangoes may present different physical challenges, for stone fruit harvesting, at least, the work demands minimal stretching and back-bending.

Speaking from personal experience, it’s a kinder and gentler work detail for those of us who may not enjoy the suppleness of youth. 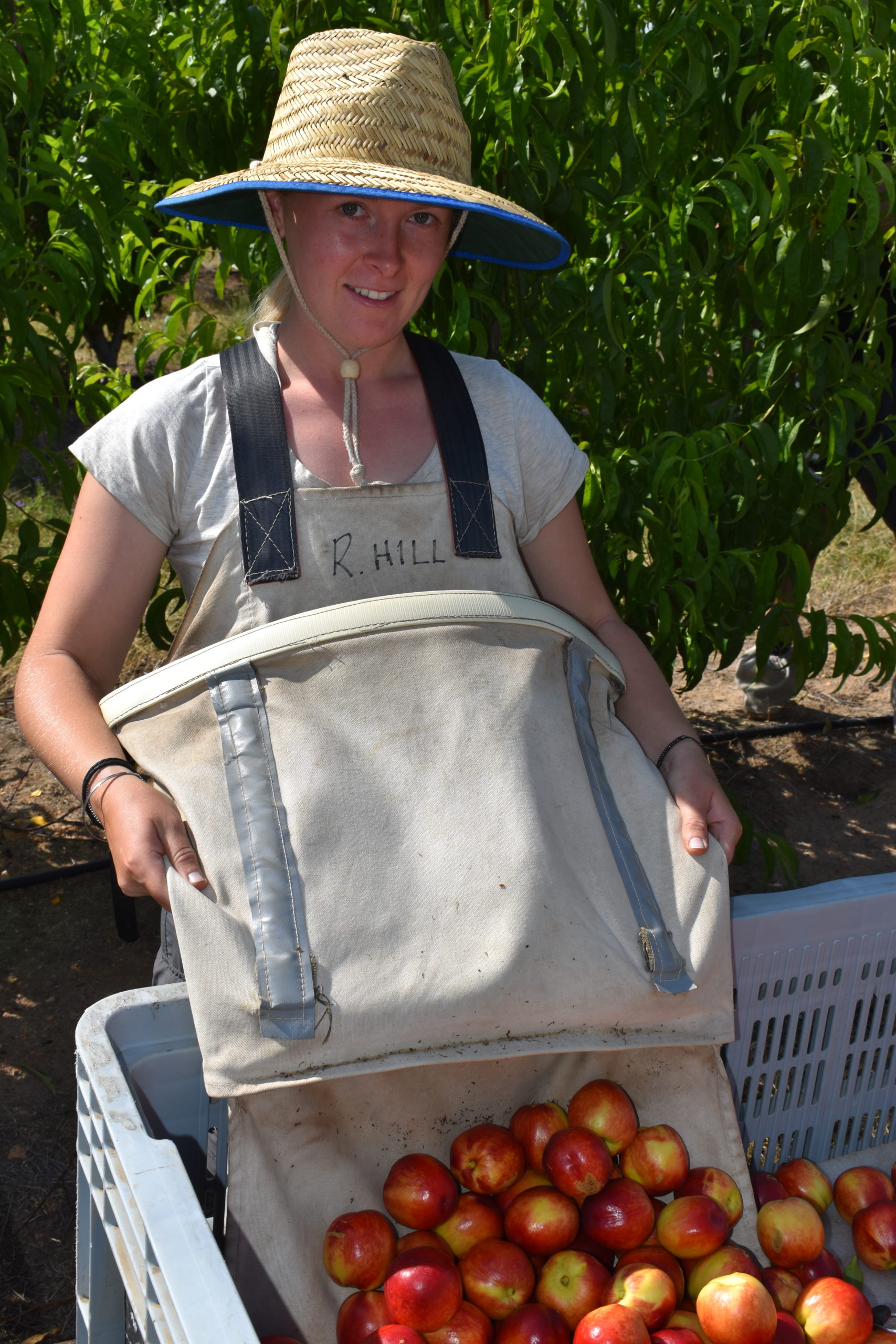 As an aside, it’s been reported that gun strawberry pickers are on a much better financial wicket than others in the fruit harvesting game.

But just consider all the money they’re probably ploughing back in to physiotherapists and chiropractors to realign their lower backs.

Has that been factored into the equation? I don’t think so.

The key takeaway from this immersive exercise among the swaying nectarine orchards is that a positive mental attitude and the ability to work well with others are the prized attributes. Age should be no deterrent.

And what better way to shake off those COVID blues (and maybe COVID kilos) after months of social restrictions and heavily sanitised hand-wringing anxiety then some honest toil in the field, sweating it out with like-minded people, in tune with one’s circadian rhythms and the residue of god’s earth under your fingernails.

And don’t get me started on how good cold beer tastes watching the sunset across a big sky.

Although, for the backpackers I spoke to, the day typically starts at 6am and finishes early afternoon, leaving time to spend socialising at the Stanthorpe pool or taking in the sights and spending money their money locally.

That’s why everyone in the Australian economy wins from the backpacker labour force, Gus says.

“They earn their pay; they save it up and then go and drop a heap of it in our tourist towns before moving onto the next farm region.” 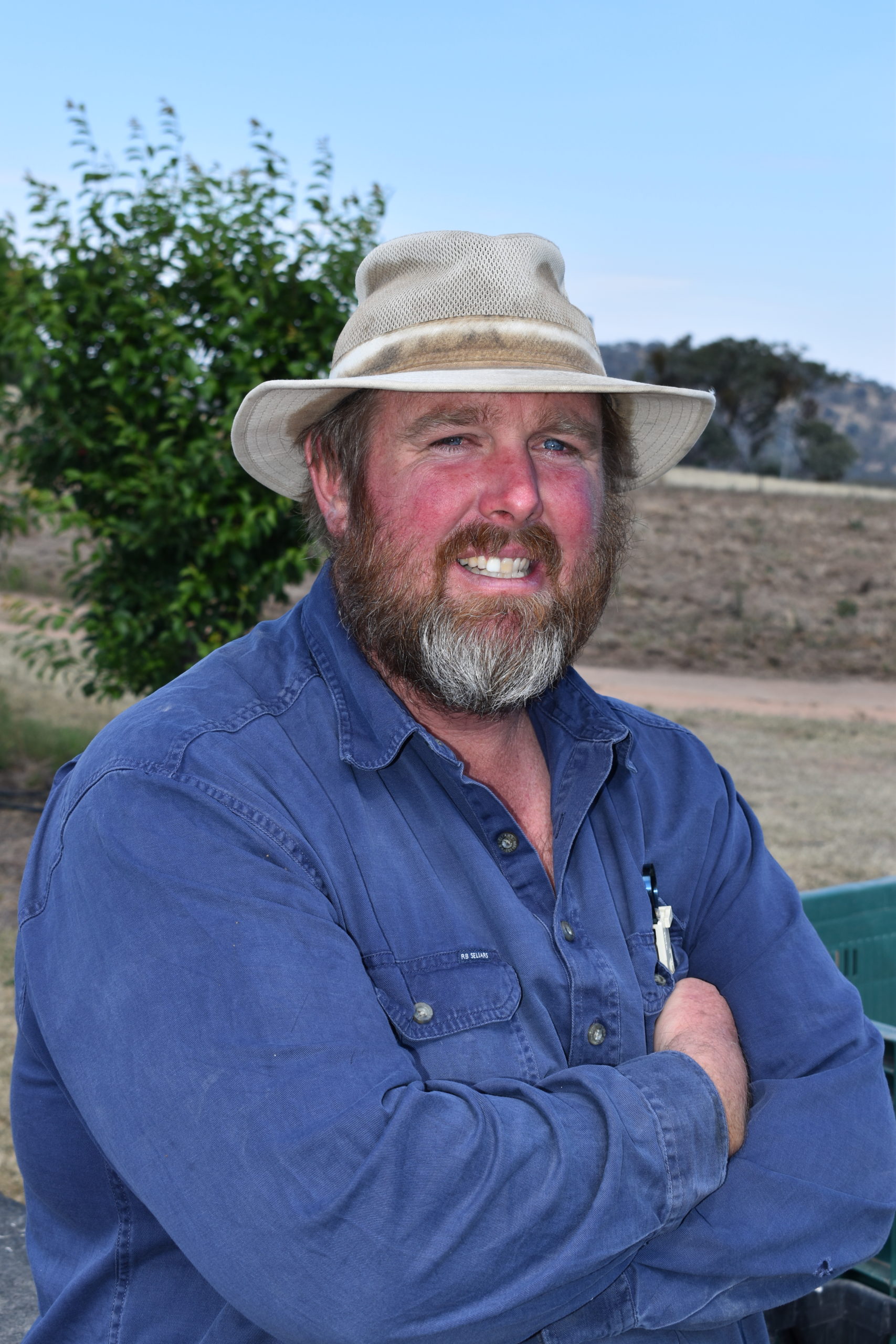 For those who are set up, they’ll buy a camper van typically for under $10,000 and then use this as their primary mode of transportation between farming regions, while doubling as their home while on site.

That reduces living costs and means local roads, populated with wildlife and unfamiliar conditions aren’t choked with foreign backpackers travelling to and from work, often at dawn when kangaroos are at their most prolific.

Ripe for the picking: why COVID is forcing a rethink on farm labour

And if the van is kept in good condition, they’ll sell it close to its original price to the next wave of backpackers coming through. Sorted.

A federal parliamentary committee, which recently looked into the coronavirus-induced foreign worker shortfall, certainly wants young Australians to buy into the romance of the bush experience.

The committee is recommending a promotional campaign, appealing to young Australians’ spirit of adventure to consider fruit and vegetable picking as a working holiday in lieu of being able to travel to Europe or South-East Asia.

It’s a gap year, or gap season, depending on how long the work lasts for, I suppose.

I reckon that objective is just the ticket for anyone in government with a background in marketing and/or tourism. I’m not sure if Prime Minister Scott Morrison has lobbed in his CV.

For a bloke with his track-record, though, it’s low-hanging fruit.

But the first step with any good marketing campaign is defining your audience first. So, Australia, where the bloody hell are ya? Your next adventure awaits.

Disclosure: The author of this article received no payment for this assignment, apart from accepting two homemade chocolate-chip biscuits and a thermos of tea at smoko and a box of nectarines, which in line with media ethics he duly shared with family and friends upon his return home, but not his colleagues at InQueensland (sorry team).