Hundreds of sea turtles are gathering off the coast of Bundaberg for their annual sex marathon, involving days of mating with multiple partners, before the females faithfully return to the beach where they hatched long ago to lay their eggs.

Loggerhead, leatherback and green turtles have travelled thousands of kilometres using Earth’s magnetic field to locate “courtship areas” and researchers are seizing the opportunity to study the phenomenon, which only lasts a few weeks.

It has been observed that while the reptiles may be slow and passive on land, their mating style – which sees males battle to attach to females’ shells – is anything but sedate.

They do not form pairing partnerships with any of the males.

“The males are quite chaotic and they have got their eye on the prize.

“We quite often see a stack of turtles on top of each other and the males will constantly try and rip each other off for their chance to mate.”

Little was known about sea turtles a few decades ago, but advances in technology, including non-corrosive tags and underwater cameras, are shedding new light on the curious copulation process and the success rate for offspring.

He said while the average lifespan of sea turtles was still unclear, he had recorded turtles in their 70s or 80s still successfully reproducing.

“Nobody has any data apart from the data we’ve got,” Limpus said.

“At this point in time we are going to say the average breeding life is a few decades of breeding every few years, but individuals, keep an open mind, maybe they have a 100-year breeding life. Ask me in 30 years’ time.”

After mating with as many partners as possible the turtles part ways.

Males continuing their underwater journey around the world, while females stick closer to shore.

Limpus said the female stored the sperm in a “sperm bank” until she was ready to haul herself up to a beach to lay.

He said this allowed the female to lay multiple times during the summer nesting season, without wasting time and energy locating more males.

“This is a situation where she is acquiring a large amount of sperm and storing it in the upper ovary ducts,” Limpus said.

“Because she’s got sperm from several males, in that one clutch of 100 or 150 eggs, there will be several males represented.” 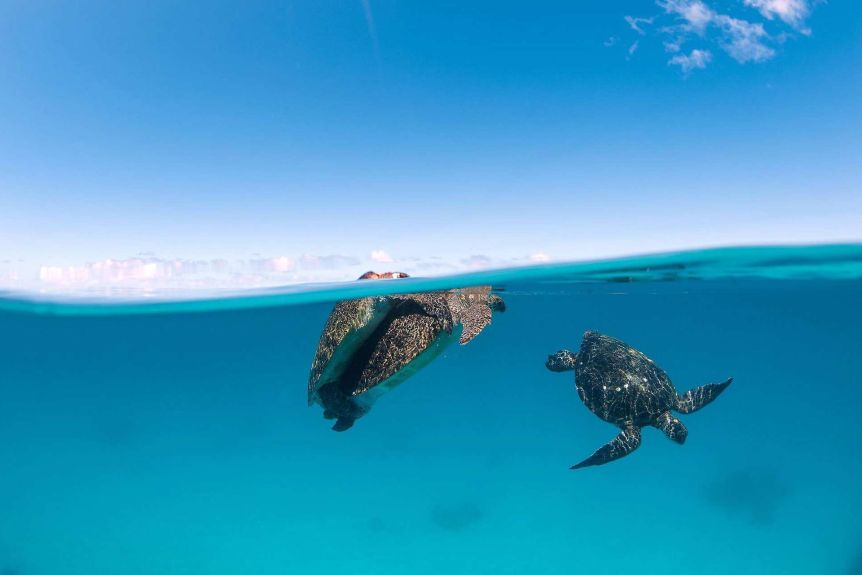 During mating, the male turtle uses a hook on its flipper to attach to the shell of the female.

Although they are capable of holding their breath for up to 30 minutes, turtles must continue heading to the surface for air.

But it’s not drowning that makes sexual intercourse for turtles dangerous — it’s sharks.

Limpus said the female lost speed and mobility while the male was attached to her shell, making them easy pickings for the ocean predators.

“In the life of a turtle, the courtship time is actually a time of elevated risk of shark attack or shark bites,” he said.

“I suspect this is to lower the risk of a big predator zipping up from underneath in deep water.”

With the rise in popularity and accessibility of underwater cameras, the sex life of turtles has been captured by keen divers and snorkellers on the Great Barrier Reef.

Marine biologist Shackleton lives and works on Lady Elliot Island and her video of several males vigorously attempting to mate with a female was shared around the world on Instagram.

Shackleton spotted turtles mating for the first time last year, but she said this year she had witnessed a lot more activity in the lagoons around the coral island.

She warned curious onlookers to be cautious if they came across a turtle mating area, with some swimmers mistaken for female turtles and becoming the target of males.

“You have to have your wits about you if you encounter turtles mating, because there is a lot going on in the water,” Shackleton said.

Nesting season continues in the Bundaberg and surrounding coastal regions until late March.