The identity of a frail, elderly woman found by the side of the road on Queensland’s Sunshine Coast remains a mystery and police are urging any relatives to contact them.

The woman, believed to be in her 80s or 90s, was picked up by a driver on Brandenburg Road in Mooloolah Valley on September 8 and dropped outside Nambour Hospital.

However, he says police are not investigating any criminality or elderly abuse and just want to find her family.

“Our primary investigation is just to locate who this lady is to reunite her with her family,” said Robinson.

Police have been unable to ask the woman who she is because she has been suffering a “challenging health situation”, although she is improving after being transferred to Sunshine Coast University Hospital.

Robinson said she was now able to communicate verbally and have conversations with people.

“It’s not something where we’ve been able to go charging in very quickly with and we’re taking it one step at a time and exploring those avenues as she’s capable,” he said.

Officers have put out a call for public assistance after trying many lines of inquiry, hoping it will help solve the mystery.

Police are unable to DNA test people without their permission, so they’re hoping someone can identify the woman.

“We still don’t know who her or her family is.

“The lady was wearing a ring that might be able to be identified. 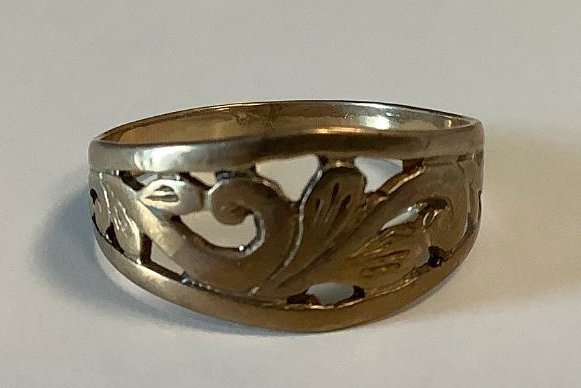 Police hope this distinctive ring might help identify the woman.

“That’s going to be our quickest line of inquiry without bureaucracy, sending off inquiries that could take days to get back,”  Robinson said.

“It only takes one person, who knows a person, to make one phone call and we can identify the lady.”

He said the woman’s situation was unique, agreeing that it was almost like a reverse missing person’s case.

“We have the located person, we’re just trying to find the family,” he said.

Police said the man who dropped her to the hospital indicated he was not the woman’s relative, friend or carer, and they had no reason to question “that he’s not just just a good Samaritan”.

“He came in, he stated exactly what occurred and at this stage the evidence suggests what he said occurred,”  Robertson said.

“He does believe he might have seen her in the area before.”

“It just takes one person who knows a person to make a phone call,” Acting Inspector Robertson said.

Anyone with information about the woman is urged to contact police immediately.