Before multinational soda giants Coca-Cola and Pepsi dominated the market, Australia had its own thriving soft drink industry.

In the mid-1950s, nearly 600 soft drink companies were in operation.

“Small towns like Dalby had two, Toowoomba had three or four, every little town had one,” said Murray Rosenberg, co-owner of Crows Nest Soft Drinks in Queensland.

“A lot of the popular brands got bought out by the majors,” he said.

“They were offered large amounts of cash to surrender their brand; the majors bought the market share.”

Six years ago, the future for Crows Nest Soft Drinks in the small town of Crows Nest, 150 kilometres north-west of Brisbane, was bleak.

After bottling for 117 years, it was weeks away from closing when Rosenberg, who was working in the mining industry, bought it with Alex Davidson, a retired baker.

They acquired worn-out equipment and an old recipe book with the secret formulas for nearly 30 different syrup flavours.

“I could follow recipes, being a baker, and Murray’s a very clever engineer, so the combination’s worked,” Davidson said.

The pair said moving the factory to Crow’s Nest’s main street and opening a shop-front full of product and memorabilia turned the business around.

“One of the things we never saw in the numbers was the smiles on people’s faces when they’d come in from all over Australia, and it started to twig the brand was something special,” Rosenberg said.

He calls that joyful nostalgia “the magic”. 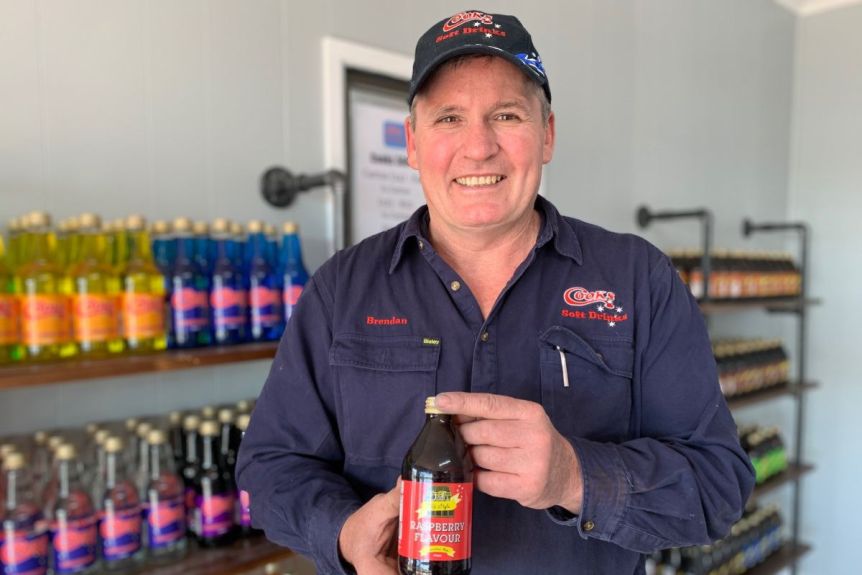 A return to old-fashioned flavours

A hundred kilometres away in Pittsworth, Cooks Soft Drinks was saved by a local electrician.

It had been bottling since 1900 when Brendan Cavanagh bought it in 2015.

“I heard the doors were going to shut and thought, ‘Something this good can’t be lost,’ because once they’re gone, they’re gone,” Cavanagh said.

“The flavours appealed to us, just the richness and the uniqueness of them.

“You don’t go into the supermarket and buy drinks with flavours like that.”

With a smile, he admitted his wife called his purchase his “mid-life crisis”.

Cavanagh moved the factory to Pittsworth’s main street and opened a shop.

The business is now profitable and growing.

A new bottling line was bought so he could do more contract bottling for local farmers.

Three producers have sent cordial made from waste produce, which he carbonates, bottles and labels.

“The first person we did this for told us he’d been trying to get it done but the larger companies had minimum orders of 10 pallets — I told him I’d do him 20 cartons,” Mr Cavanagh said.

“Those contracts have grown and the popularity has taken off.”

‘Invented as a treat’

Nostalgia is a big driver for sales, as the old flavours trigger childhood memories.

At the shop, customers are advised to treat soft drink like their grandparents did.

“The carbonated drink was invented as a treat; it was never intended to be consumed as a hydration aid,” Rosenberg said.

Davidson is adamant he will not change the old recipes.

“They’ve been around since 1903, but with the controversy over sugar, we’re finding people are buying the syrups because you can make it any way you like it,” he said.

“Me, I just put a few drops in the bottom of a glass and soda water.”

There’s a similarity between the soft drink businesses that may explain why at least four of the country’s remaining seven companies are in Queensland.

You either love or hate the black brew and as “sars” isn’t so beloved in all states, it can be hard to find.

But to Davidson, it’s black gold.

“It’s our biggest seller,” he said.

“We couldn’t keep the doors open without it.”

Watch this story on ABC TV’s Landline on view.