The sound of running water heralds an unusual sort of outback organic garden at the pub, which hosted the first public performance of ‘Waltzing Matilda’ in 1895.

Aquaponics is a system where fish are raised in tanks and plants are used to clean the water.

The plants are fertilised in the process and both fish and plants end up on the table.

The closed loop system works well in the outback because no water is wasted and the plants do not need fertiliser. 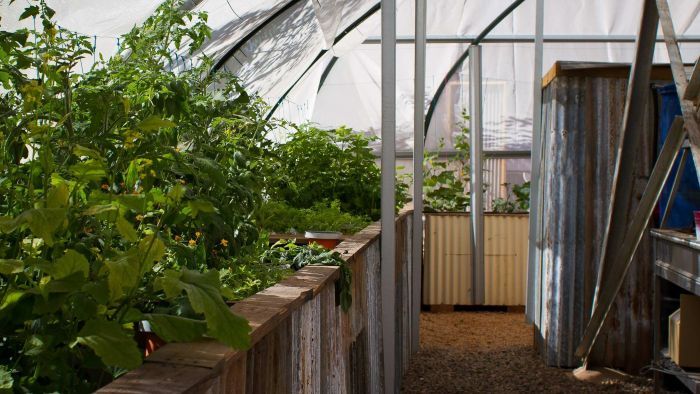 The hotel’s aquaponics system is made from recycled materials. (Photo: ABC)

Ben Casey, manager of the North Gregory Hotel, said that people were often intimidated by aquaponics, but it was a relatively simple system.

“Aquaponics is fantastic — it’s the lazy man’s gardening,” he said.

“Some people can be scared of it because it sounds scary but it really can be very simple.”

“They literally are a dunny, they’re a dunny for the fish,” Casey said.

Casey said “we keep those guys separate because the barramundi will eat the jade perch”.

He said the fish that the system was growing were a couple of months off eating.

Water from the fish tanks is pumped downwards and then back up, the change in direction allows Casey to remove any big solids from the system and compost them.

The water is then pumped into a large tank filled with, of all things, milk bottle lids.

Inside the tank good bacteria that lives on the recycled lids processes the wastewater into fertiliser.

The water is then pumped into the beds, and onto the plants.

Because the water is constantly flowing, the plants can grow on rocks.

“We’ve just got to make sure no warm-blooded animals put any faeces in [the system],” Casey said when asked about food safety.

“So we put a shade cloth up to stop any birds from coming in and we also test the water every two days just to make sure none of those contaminants are coming in and also to test if the fish are producing too much or not enough waste.”

The pub grows all its leafy greens, herbs and some veggies from the garden.

Casey said the system allowed them to grow varieties they were unable to buy, and saved thousands of dollars on produce.

“The main thing we focus on are greens; they don’t last as long as other fruit and vegetables and we want them as fresh as possible. Similarly, herbs — plus it allows us to grow a greater variety.”

The system was built out of recycled corrugated iron and building materials.

Cardboard from the business was turned into compost, saving the business money and added much-needed carbon to the compost.

Even dying plants are recovered, with local residents donating unwanted and struggling plants, which are rejuvenated in the system.