For Gerard Johnson, a professional driver of 20 years’ experience and the current president of the Livestock and Rural Transporters Association of Queensland (LRTAQ), investing in better roads is simply a no-brainer.

And it’s not all about improved driver safety, although that’s a big factor, given long-haul truck driving rates as one of the nation’s most dangerous professions.

“Better targeted investment into the rural road network will achieve higher productivity movements, efficiency of operations, better delivery times, improved fatigue management and animal welfare outcomes, and ultimately, more money into government coffers,” he told InQueensland this week amid a storm that has erupted over the state’s roads.

As the operator of his own business from the central-west community of Tambo, about 860km northwest of Brisbane, Johnson finds it easy to rattle off three of the worst pieces of road infrastructure that he regularly encounters during his work day carting livestock and general freight.

“Right across the state there are important freight corridors with serious safety issues and every one of our members will have their own opinion on what constitutes the worst,” he said.

“May Downs Road in Central Queensland is a major freight corridor which is unsealed with a low timber bridge and can be cut for months at a time in wet weather.

Johnson is not alone in his calls for urgent action on rural roads.

Shockingly, deaths in the Mackay/Isaac/Whitsunday region have increased by almost twofold, with 21 fatalities recorded in the 2019-20 year compared to 12 the year before.

“Every week we hear news of somebody’s loved one taken away too soon due to a road accident in north Queensland,” Katter said.

“I wonder how many lives have to be lost before our highways and roads are brought up to standard?”

“I am in receipt of repeat appeals for action on the Flinders Highway, between Charters Towers and Townsville, where there is a chronic lack of overtaking lanes. This, coupled with increased congestion on the highway, is a recipe for disaster.

“Similarly, a recent report by economist Colin Dwyer, found the stretch of the Bruce Highway between Bowen and Ayr was the worst in the state.

“I must ask, if Brisbane was seeing a 25 to 30 per cent increase in annual road deaths would the State Government be sitting on their hands?”

“Our data shows that more regional Queenslanders die in crashes than their city-based counterparts because they weren’t wearing a seatbelt,” he said.

“We are now trialling world-leading high-tech cameras across Queensland that catch people distracted by their mobile phone behind the wheel and people not wearing a seat belt.

“These cameras will be fully operational throughout Queensland from 2021 and will be used anywhere any time to increase road safety.

“If Mr Katter supports road safety, he might like to declare whether he supports our new high-tech road safety cameras being rolled out across Queensland to prevent crashes and tragedies.”

Road planning off the rails

However, farmer advocacy group AgForce is determined to keep the heat on the State Government over what it says are failures to develop and fund a comprehensive and strategic road program for rural Queensland.

Instead, the Government continues to focus on emergency fixes and urban roads that attract public attention, costing the Queensland economy billions of dollars a year, AgForce claims.

Cross River Rail cost blowouts of $5.4 billion on expensive infrastructure for inner-city commuters in Brisbane, is just one high-profile example of State Government spending that earns the ire of rural road users.

AgForce’s transport committee chair Caroline Harris said the fact that up to half of a primary producer’s expenses are on transport indicated the scale of the problem with Queensland’s rural road network that’s come at the expense of ‘city-centric’ planning.

“The truth is that government investment in road infrastructure hasn’t kept pace with development in regional communities, rural industries, or farm machinery and technology – astonishing, considering that nearly half of the State’s economy is generated outside greater Brisbane,” Harris said.

“Queensland is one of the country’s most productive states but also its second largest and most regionalised.

“Agriculture – as one of the declared essential services – is prepared to do the heavy lifting when it comes to the post-COVID economic recovery, but we need infrastructure that enables us to do so.”

Harris is urging the Palaszczuk Government to adopt a long-term strategy to ensure investment supports opportunities in regional, not just metropolitan, Queensland.

“For example, the Department of Transport and Main Roads identified 120 sub-standard bridges across regional Queensland, of which 27 were possibly unsafe and being considered for speed and, or, weight restrictions – at a time when industry is seeking greater access not less,” she said.

AgForce is hoping the next administration post the October State election will consider its proposal for an inland “alternative” to the Bruce Highway, for which most infrastructure required already exists.

“The CSIRO estimates that the Bruce Highway being closed at any point – a frequent occurrence for a coastal road in a tropical State – costs the economy around $10 million a day,” she said.

“Clearly upgrading and adding to existing infrastructure to create an inland route would be a smart investment.” 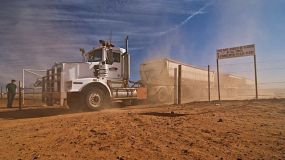 “We have delivered four record transport and roads budgets in the past five years, with $23 billion committed over four years in our most recent budget – more than half of which was invested in regional Queensland,” he said.

“In response to COVID-19, we have also announced a further $1 billion in new and accelerated roads funding since April, most of it for regional road upgrades and maintenance. That includes more than $60 million for the Flinders Highway, the highway which Katter’s Australian Party falsely claims we have ignored.

“We’ve also built the $36 million Cape River Bridge south of Charters Towers, invested $28 million in road upgrades at eight locations across Mount Isa over the last two years, we built the $43 million Riverway Drive upgrade and we’ll be completing the sealing of the Cloncurry-Dajarra Road as part of our COVID-19 roads stimulus economic plan.”

Bailey said there was about $180 million in new and accelerated funding for road upgrades in northwest Queensland that would start within the next 12 months including Cloncurry-Dajarra Rd.

“That’s on top of billions of dollars committed for Bruce Highway upgrades in north Queensland, including duplicating the Black River bridge on the highway north of Townsville, not to mention the progress being made to get the last stage of the Townsville Ring Road started late this year, with $230 million in joint-funding locked in,” he said.