The joint Queensland Farmers Federation and Griffith University project comes as the sector continues to work on its image problem as a workplace unfriendly to women and improve its gender equity performance, especially at the executive level of agribusiness and agripolitical groups.

The research released last week suggests the work of women on farms and throughout agriculture generally still remains invisible and lacking in initiatives that would encourage more women to join the leadership ranks.

“These factors have been detrimental to the recognition of women’s value in farming businesses and in the wider agriculture community resulting in a reduction in programs and other specific support,” Davis said.

“Women aspire to undertake more business activities and hold more positions of leadership within the agriculture sector and in their communities.

“To do so, succession planning and financial assistance, training and development, and opportunities for networking and mentoring must be made available.”

The challenges expressed in the report reflect the experience of central Queensland’s Renee Anderson, who juggles multiple roles from her home and workplace on a wheat and cotton farm near Emerald.

She’s also finishing a major report into better ways to communicate farming practices to consumers and how best management practices influence social licence in agriculture, part of a scholarship she was awarded from Nuffield Australia in 2019 that took her across Europe, North America and Asia to research her project

Anderson said she would like to keep developing her career, but agrees there needed to be more training and development programs geared with enough flexibility to match the busy schedules of women performing several different roles, often in remote parts of the state.

“Upskilling for women needs to be realistic,” she said.

“I’ve attended a couple of training programs that really haven’t been practical or made a difference towards enhancing my development or made things easier on the farm.

“Leadership and business management training is as much about personal growth and recognising and utilising the skills you do have.

“Programs that develop those in women require a multi-pronged, flexible and evidence- based approach that are fit for purpose within their farm businesses and families, not just a suite of ad hoc initiatives.”

Anderson said financial support in the form of sponsorship for women to participate would also encourage more to get involved.

“Removing women off the farm to participate is more than just extra time off-farm, it’s an added expense to the farming business as the many roles they do are unpaid,” she said.

“Taking time away to upskill requires someone to fill those many hats worn on farm by someone else at a cost.”

The National Farmers Federation, which has achieved a 50-50 gender ratio on its board, runs a Diversity in Agricultural Leadership course each year available exclusively to women.

The course is supported by several of agriculture’s biggest corporate partners, who have all committed to increasing gender diversity within their organisations and reporting their progress annually.

NFF president Fiona Simson said the program aligned with NFF’s 2030 Roadmap, which aims for agriculture to be a $100 billion industry by 2030 with a target to double the number of women in agriculture leadership roles by the same year.

“The Diversity in Agriculture Leadership Program is making serious inroads towards this goal,” she said.

QFF boss Georgina Davis said she would charge her organisation’s Diversity and Leadership Panel with the task to identify and prioritise training and development needs, as well as the best mechanisms for delivery in the wake of the report’s findings.

She also acknowledged she had work to do on her own board, which currently has no women among any of the director positions.

“This research has inspired QFF to reflect on the role that industry representative bodies play in recognising and restoring this gender imbalance of leadership roles,” she said.

“It is one we take seriously and will continue to work towards identifying opportunities for women on our own board.” 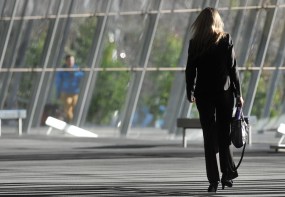 Companies do better with women at the helm, says study

Davis said QFF welcomed and supported efforts from within the agriculture sector to address the underrepresentation of women in leadership positions.

“However, the report findings indicate there is a need to analyse the current training and development opportunities, to identify gaps and ensure that these are tailored and accessible to support women in achieving their aspirations,” she said.

“Programs that provide a range of support measures for women to achieve leadership roles need to consider the many roles women perform across their family, business and community to ensure they do not form barriers to their participation in leadership development activities.

“Additionally, scholarships and bursaries recognise that women make a significant contribution to off-farm income which is often reinvested in the farm itself.”

Lead researcher of the study, Dr Susan Ressia, from the Griffith Business School, said women in the sector had complex working lives and any future leadership support programs needed to account for them.

“Women take on a range of responsibilities to help manage and keep the farm going from bookkeeping, volunteering in the community, raising families and even working off the farm to bring in extra income,” she said.

“To help achieve their leadership aspirations, we need to determine a range of support measures tailored to the women who are juggling these multiple responsibilities.

“They need more support to help them realise their potential.”