Queensland’s performing arts industry is rallying in the face of COVID-19 disruptions in a bid to keep their country cousins singing and dancing through the health crisis.

With tours and stage performances still on temporary hold, it’s meant our leading arts organisations based in Brisbane have applied some inventive thinking to bring performers and audiences together in the virtual space where social distancing and geographical separation is no barrier.

Just as well they are creative types.

While performance venues across the state remain darkened until further notice, Queensland Theatre’s artistic director Lee Lewis said it hadn’t dimmed her organisation’s passion for keeping the spotlight on the State’s up and coming players.

Right now, Queensland Theatre’s education team would have been be rolling out over 100 different workshops across Queensland, taking some of the best teaching artists into classrooms.

And with the entertainment industry smashed by the pandemic, the program is providing ongoing jobs to actors, directors and other creatives.

“Queensland Theatre has done the most extraordinary job in the last eight weeks,” Lewis said.

“They have transformed the already impressive program into a digitally delivered virtual learning and performance vehicle for all our young artists, students and teachers.

“In two weeks, they pivoted to deliver a whole term’s worth of teaching to Queensland teachers so that they were supported to keep giving their students a quality drama experience online.”

Young aspirants for the Queensland Ballet Academy in Brisbane are also appreciating the online experience and the new opportunities the digital medium has brought to their chances of taking the next step in their careers.

Auditions for the prestigious school are normally held in Brisbane, meaning timely and expensive travel for any candidate applying from rural and regional Queensland.

For the first time this year auditions have been held via video conference, overwhelming staff with the response they’ve received and the window that’s provided into the depth of talent in the wings.

According to Queensland Ballet’s executive director Dilshani Weerasinghe the limits to the program haven’t stopped at Queensland’s – or even Australia’s borders – with dancers from California even reaching out to access the academy’s dance programs online.

The response means Queensland Ballet is hopeful of resurrecting some part of its rural and regional tour which was planned for mid-year prior to COVID-19 hitting.

“We strongly believe the art form of ballet has the transformative power to make a difference to many,” Weerasinghe said.

“We work to encourage wellness, safety, and aspiration in all members of our society, by creating magic and enriching lives.

“Following our strategic intentions to build a stronger, safer, more creative and healthier world, we look beyond our audience and subscriber base, into school classrooms, around regional towns, online into homes, across all demographics and with all communities in mind.

“Our education and community engagement programs alone reach more than 50,000 participants, from all walks of life.”

Communities in one voice

Connecting to a non-traditional audience has been a core mission of Opera Queensland for several years, with Covid-19 now accelerating plans to be even braver with their content choices, capitalising on the rural engagement activities they’ve been forced to take online in recent weeks.

While its bread and butter may be the fare of the classical composers, Opera Queensland’s director of learning, regional and community, Mark Taylor, has recently been more absorbed by the works of Tammy Wynette, Hank Williams and Johnny Cash.

Taylor has a work in the pipeline that will combine elements of country music with operatic forms, bringing a genre-bending experience to rural and regional audiences in 2021 in venues that comply with future social distancing guidelines.

While it remains an early work in progress, Taylor said the concept had received an enthusiastic response from some “significant figures in the rural events space” reinforcing the interest in opera he’s witnessed in Queensland’s rural and regional centres.

Opera Queensland would have been preparing to tour its 2020 production of Tosca if Covid-19 had not have intervened.

Instead Opera Queensland has organised a massive “community choir” experience online, where ensembles in Cairns, Townsville, Mackay, Rockhampton, Gladstone, Toowoomba and the Gold Coast have been captured on video singing chorus parts from the show.

They will then be edited together with parts sung by professional performers and unveiled via video link, possibly on August 18, but still to be officially confirmed.

“This opportunity is open to anyone residing in these communities and registration is available through the Opera Queensland website,” Taylor said.

While many arts programs remain restricted to the online space, other initiatives are moving forward to engage students and audiences face to face, which is attracting sponsorship from some of Queensland’s biggest corporations.

Both programs deliver music education and concert experiences to the students, teachers and community of regional Queensland, with members of the orchestra travelling well over 2000km to participate.

“The GEM Project began in 2012, and the CMR Initiative began in 2016. Since this time, more than 4507 students have participated in over 110 workshops and performed over 133 concerts to a combined live audience of over 63,000,” Queensland Symphony Orchestra chief executive Craig Whitehead said.

“This is an extraordinary achievement, and testament to the passion for music our students in regional Queensland have.”

Whitehead said the partnership with Australia Pacific LNG, and its operators ConocoPhillips and Origin Energy, has amounted to nearly $2 million to date, enabling  “us to truly deliver on our promise of being an orchestra for every Queenslander”.

“In fact, our partner is even more passionate about assisting us to develop digital alternatives, as well as live tours for both programs this year,” Whitehead said.

“In addition, the CMR Initiative will be extended in 2020 to also include Tara.”

“At the core of Australia Pacific LNG’s sponsorship is education and sharing opportunities across communities where we operate,” he said.

“We feel it’s important that regional students get the same opportunities as those in our capital cities and these students can be part of major music programs and enter serious music pathways no matter where they live.”

Former Tannum Sands State High School student Rafael Abraham said being a part of one of the early years of the GEM program was something he would never forget. 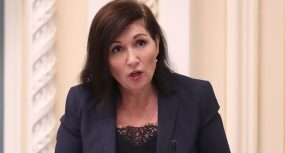 You are not forgotten: Minister's personal pledge to struggling arts sector

“As a student who would travel three hours every fortnight for their cello lesson, having Queensland Symphony Orchestra come to my own high school was an entirely unique experience,” he said.

“There is very little opportunity to see a professional orchestra perform, and as someone who always aspired to follow cello and become an orchestral musician, the Gladstone program still sits vividly in my memories.”

Queensland Symphony Orchestra is also partnering with Yurika, part of Energy Queensland, to produce a series of educational videos for school students across the state.

“These videos bring the music of QSO and music lessons into classrooms in some of the most remote parts of the state,” Whitehead said.

Yurika Acting executive general manager Carly Irving said the company was proud to be partnering with the QSO on such an innovative and engaging program for young Queenslanders.

“As part of Energy Queensland, we believe it’s particularly important to energise Queensland communities,” she said.

“We understand that the length and breadth of our great state often creates major obstacles for education and it’s our aim through this partnership to make the music of QSO available to all students, regardless of where they live.”