The Bachelor of Animation graduate is making a huge difference to lives of children and families alike, with the phenomenal success of his TV show Bluey, which is produced in Brisbane by a team of predominantly Griffith graduates and creatives.

Eponymous pup Bluey is part of an Aussie family of blue heelers and joined by a canine community in the TV hit which has become a global hit, winning awards including a Logie, an AACTA and International Emmy Award.

As creator and writer of the series based on his own experiences as a dad, a humble and mostly publicity shy Joe is proud of the way the little dog that could, has appealed to many.

“It’s such a bonus that it’s resonated the way that it has,” he said of the ABC TV show.

“I never set out to make a show with impact, I just wanted to make a really funny show.

“Life gets pretty full on and just to have just a bit of bit of humour you can share with the kids is enough of an impact for me.” 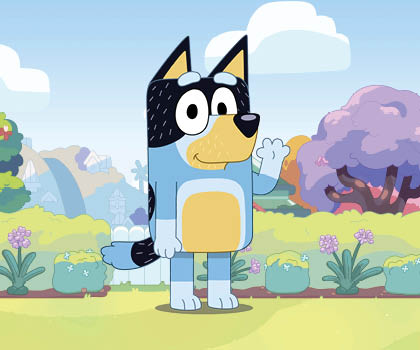 Griffith University announced the four winners of 2021 Outstanding Alumni Awards at an event at the Calile Hotel on October 6. The voice of Siri, Associate Diploma of Music graduate from 1988, Karen Jacobsen, was Master of Ceremonies.

Master of Public Administration graduate Haylene Grogan, who is making a name for herself and her people campaigning for and influencing legislation to benefit First Peoples, was named Griffith’s 2021 Outstanding First Peoples Alumnus.

The proud Yalanji and Tagalaka woman with Italian heritage is leading First Nations health equity reform in Queensland and spearheading real change in closing the enduring and complex health gap.

“We now have legislation in health in Queensland, requiring co-design with our people, that’s incredible,” she explained.

“I’ve joined government to influence the very rules that limited our people’s lives, to actually have a say, and have government understand that what they do does make a big difference in people’s lives.

“My father’s life was restricted by these rules and now, where I am, I can actually make a difference.”

2021 Outstanding Young Alumnus, Dr Dinesh Palipana OAM, has forged a path of advocacy and medical innovation that knows no bounds.

Becoming Queensland’s first quadriplegic medical intern and the second person to graduate medical school with quadriplegia in Australia was just the start of his incredible achievements, which also include a law degree, co-leading Griffith’s innovative Biospine project, advocating for those with a disability, working in Gold Coast University Hospital’s emergency department and teaching Griffith students in his role as Senior Lecturer in the School of Medicine and Dentistry.

In 2019, he was awarded the Medal of the Order of Australia and honoured with the 2020 Queensland Australian of the Year award.

This year he was appointed to the Disability Royal Commission as the Culturally and Linguistically Diverse (CALD) Senior Adviser and recently became an Australian Human Rights Commission IncludeAbility Ambassador.

“I grew up in a country where kids struggled to become educated. It was the only way they could find a better life out of poverty,” he explained.

“Coming from there, I feel incredibly privileged to have the education that I do from Griffith University.

“Despite a spinal cord injury, the University enabled me to become a doctor. This opportunity has given me the ability to hopefully make a meaningful contribution to society.

2021 Outstanding International Alumnus Ahmed Athif was recognised for his impact in the education sector and is determined that no child should be left behind in the Maldives.

Beginning his career as a teacher, Athif recognised the curriculum did not cater for children with learning difficulties or special needs and has worked to influence public policy on the issue ever since.

Through leadership positions within the Ministry of Education, volunteer roles with various non-governmental organisations and his studies at Griffith, Athif has made a sustained contribution to inclusive and special education across the atolls of the Maldives.

“As a teacher I realised we needed to rebuild the whole system of education in the entire Maldives, we needed to do everything: being professional, helping the teachers, building and developing the policies, keeping the community aware, there was a lot to do,” he said.

An extensive mapping exercise to identify the prevalence and location of students who were at risk of falling through systemic cracks has now screened 98 000 students.

Athif said his Master of Education (Special Education) allowed him a much deeper understanding of educational principles and policy that allowed him to make real change.

“The University is immensely proud of all its alumni and especially thrilled to recognise these leaders in their respective fields, who are making a recognisable impact on communities here and around the world,” Professor Evans said.

“Griffith’s reach is truly global, with more than 250,000 alumni making it matter across a diverse range of professions, from cities and towns around Australia to the Maldives, Indonesia, China, Papua New Guinea, Mongolia, Philippines, Malaysia, Saudi Arabia, Vietnam, Nepal, Taiwan and many more.”

The 2021 Outstanding Alumnus winners were chosen from 16 inspirational Griffith graduates who were given academic group awards earlier this year.