The city is powering up electric vehicles and its growing green credentials with a network of 10 of the RTM75 fast-charging stations by Brisbane technology company Tritium that will be installed over a 50km city-wide radius from Pimpama on the northern edge of the city to Coolangatta and offset by solar power generation.

The new wave 75kW DC fast chargers deliver 75km of range to an electric vehicle within 10 minutes of charging.

The first charger was installed at Broadbeach on Tuesday.

The fast-charger network, supported by the State Government’s COVID Works for Queensland jobs booster that helps fund new infrastructure projects, will anchor the Queensland Electric Super Highway of 31 fast-charging sites enabling travel from Coolangatta to Cairns and from Brisbane west to Toowoomba in a low or zero emissions electric vehicle.

The stations will also be a key link for some of Australia’s world-class road trips that are in the process of going electric including the Pacific Coast Way from the Gold Coast to Cairns and the renowned Pacific Coast Drive from Lake Macquarie in NSW to the Gold Coast Hinterland.

Deputy Premier and Minister for State Development, Infrastructure, Local Government and Planning Steven Miles said the Queensland Government had provided $350,000 towards the charging stations, to provide a boost to the local economy during the COVID-19 pandemic.

“Having charging stations along the Gold Coast not only incentivises future EV users, but it also encourages driving tourism along a beautiful stretch of the Coast,” he said. 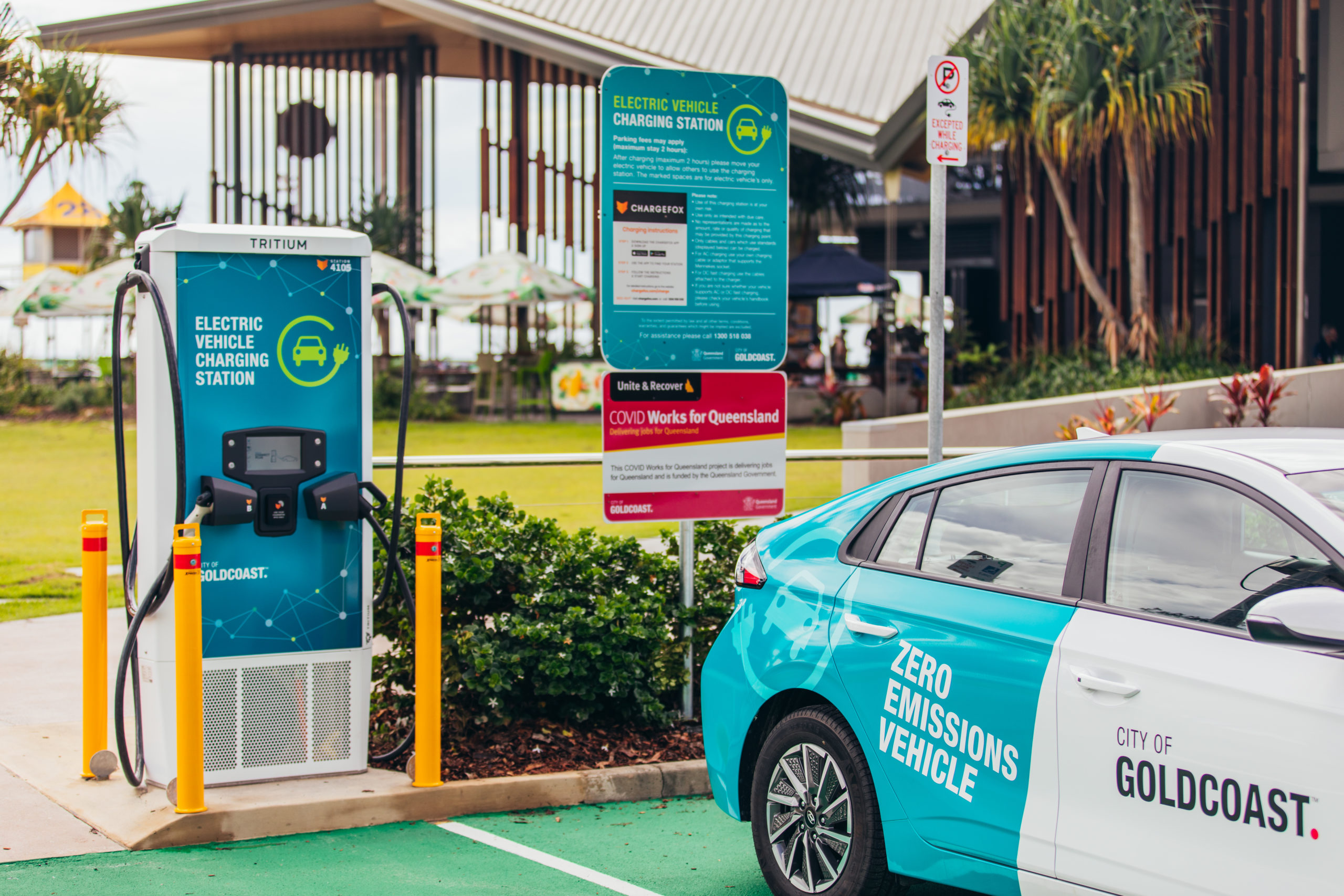 Gold Coast mayor Tom Tate said the investment in cutting-edge infrastructure reflected the city’s reputation as an innovative destination as well as its commitment to sustainability.

“As the transition to electric vehicles begins to pick up pace, we have secured the most advanced DC fast chargers on the market,’’ Tate said.

“The power used to charge vehicles at these stations will be offset by power generated by the City’s Virtual Power Plant, which harnesses solar energy from more than 47 city buildings.”

The state-of-the-art network would provide drivers with a rapid, positive recharge experience and would deliver a boost for local businesses as electric vehicle drivers stayed an average of 30 per cent longer than other travellers to return to recharge and engage with the local area, he said.

Tritium CEO Jane Hunter said the global launch of the RTM75 fast chargers on the Gold Coast put the city at the forefront of e-mobility innovation and international rapid-charger demand.

The RTM75s were the first of the new-generation Modular Scalable Charging platform that meant Tritium could rapidly deploy new product to future-proof governments and network operators across the globe, she said.

“These chargers, assembled in Tritium’s state-of-the-art manufacturing facilities in Brisbane, can be installed quickly, are upgradeable and have the narrowest profile on the market, making them suitable to be installed anywhere, from retail carparks to dense urban environments,” Hunter said.

“Electric chargers are decoupled from the highly regulated petrol station, allowing them to be conveniently located anywhere in our towns, cities, and countryside, enabling our customers to choose their energy sources and further their sustainability goals and support electric vehicle drivers to travel anywhere.”

The RTM75 can simultaneously charge  two electric vehicles, supports all charging standards on the market, and satisfies the needs of all batteries up to 920V.

The RTM75 is equipped with Plug and Charge technology, so drivers don’t have to pay by credit card or RFID tags at the charger. Instead, customers can pay through the charging cable when it communicates to the car directly. To do this a driver simply plugs in their electric vehicle, charges their car, and drives away knowing that payment was automatically and securely managed via a set of digital authentication certificates that contain pre-approved payment configurations.

The liquid-cooled RTM75 75kW fast charger is also the first to contain Whisper Mode quiet charging, while its fully sealed enclosure cuts the need for maintenance and means it is suitable for conditions such as those by the beach at the Gold Coast by protecting the electronics from dust, water, salt, or other contaminants. 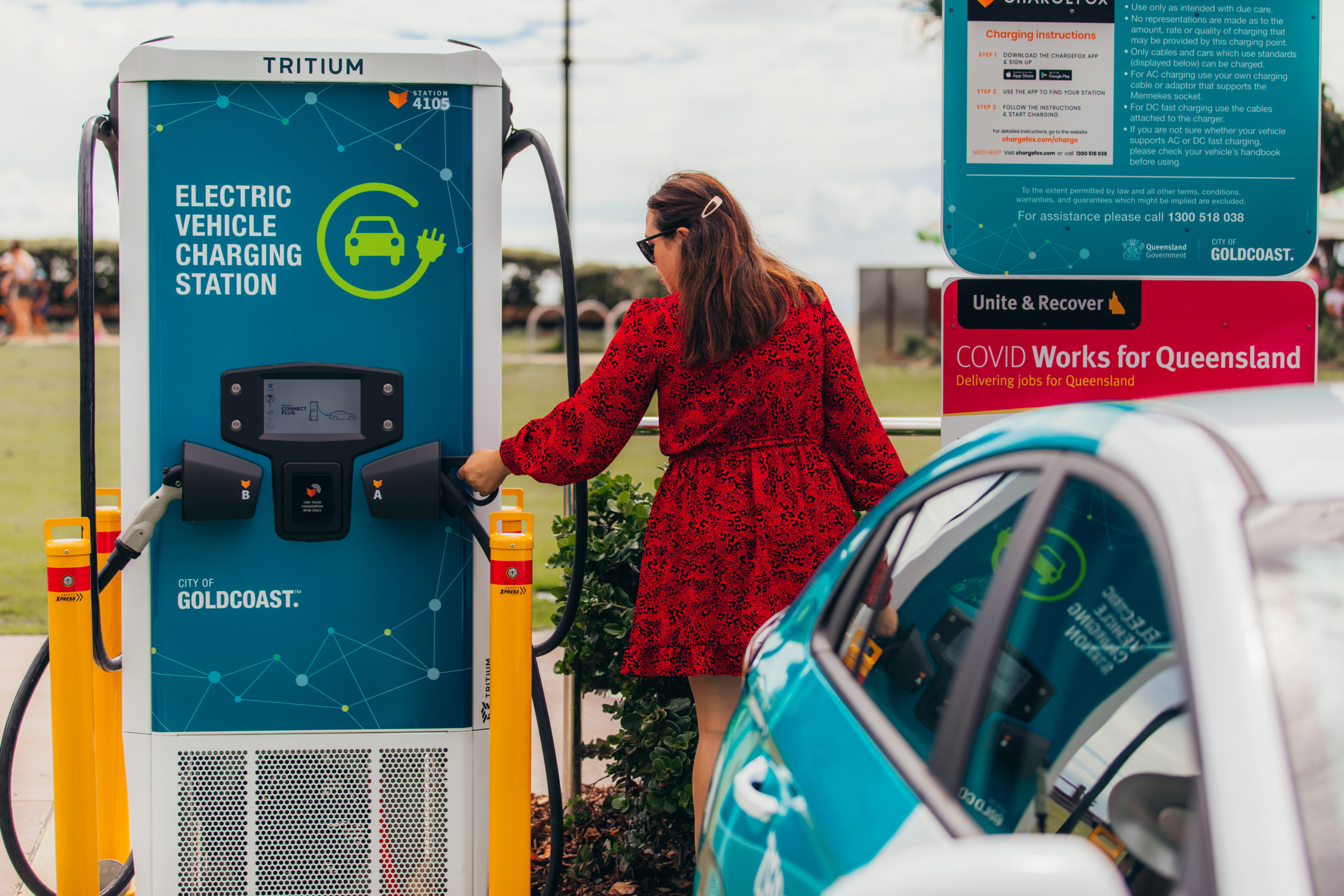 The latest charger roll out comes as demand for electric vehicles continues to escalate in Australia, with published sales figures showing the number of electric vehicles nationally topped the 20,000 mark at the end of 2020. More than 3,220 electric vehicles were sold in just the first half of 2020, despite a 20 per cent drop in overall car sales.

Sales information from the Federal Chamber of Automotive Industries Vfacts, the Electric Vehicle Council and Tesla shipping data, show demand for electric vehicles in Australia is expected to continue through 2021.

The growth of electric vehicle sales is being matched by increased  roll out of charging stations.

The Gold Coast fast-charging network is the global launch of Tritium’s latest e-mobility powering technology that is expected to become the new standard for governments and network operators wanting a charging platform that can quickly grow to meet demand.

“The RTM75 is the first product on Tritium’s new Modular Scalable Charging hardware platform which provides the next level of flexibility, capital efficiency and scalability while maintaining the attractive, compact and low maintenance design attributes Tritium products have become known for,” Finn said.