Both Ms Tame and Ms Higgins blasted Scott Morrison’s apology to women assaulted and harassed in federal parliament in a highly anticipated joint appearance at the National Press Club on Wednesday.

And Ms Tame revealed she had been threatened last year by a senior figure in a “government funded organisation” not to say anything negative about Mr Morrison ahead of the Australian of the Year awards as it might harm his re-election chances.

Higgins, who came forward to tell of her alleged rape in Parliament House last year, said she did not think Morrison’s “shocking” and “offensive” language about women’s safety would matter if his actions measured up.

“What bothered me most about the whole ‘imagine if it were our daughters’ spiel wasn’t that he necessarily needed his wife’s advice to help contextualise my rape in a way that mattered to him personally,” she said.

“I didn’t want his sympathy as a father. I wanted him to use his power as prime minister.

“I don’t care if the government has improved the way that they talk about these issues. I’m not interested in words any more. I want to see action.” 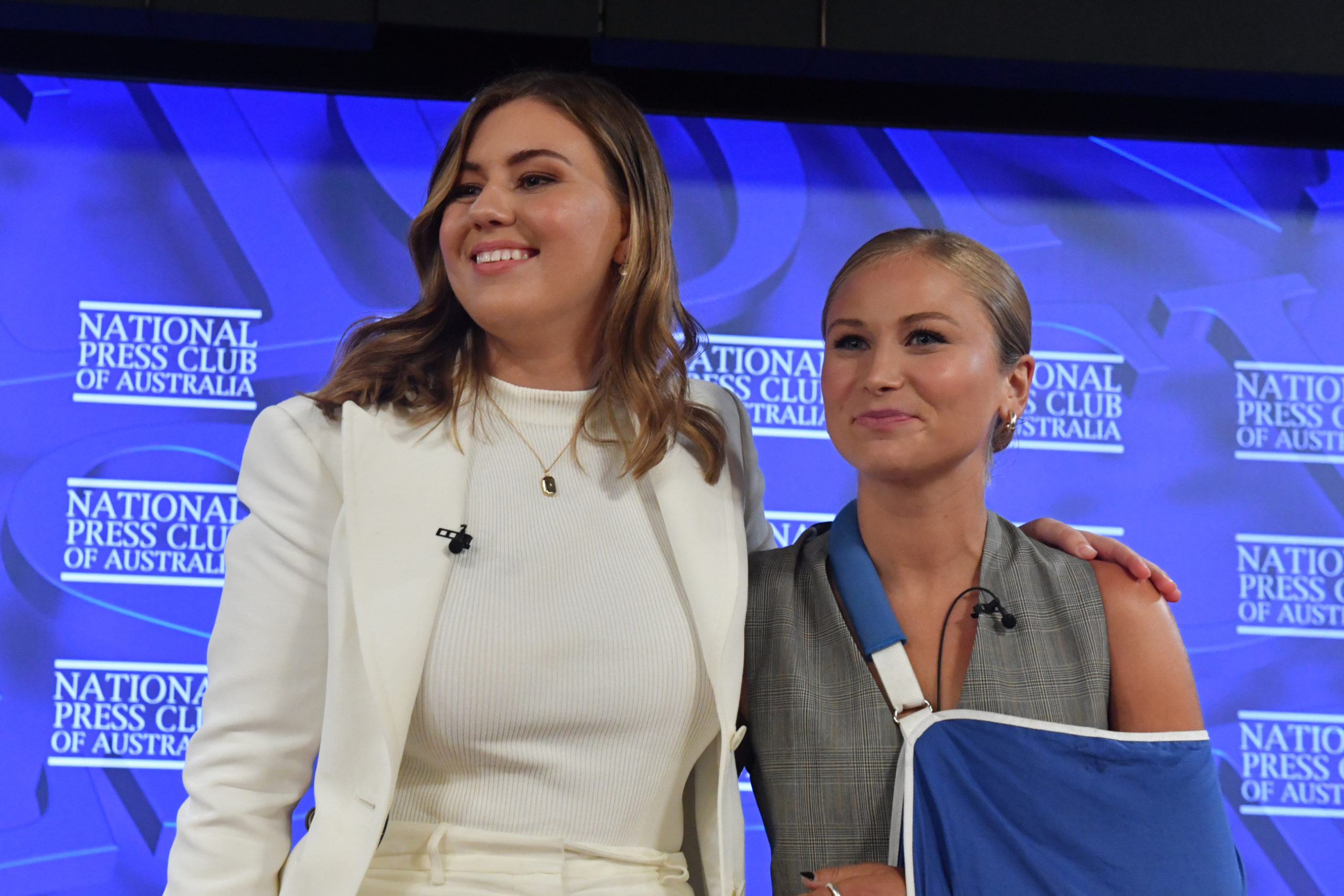 She recounted a call from a senior member of a government-funded organisation in August last year demanding she not disparaging about the prime minister at the next Australian of the Year Awards.

“I would rather go down as a disappointment to an institution than sell out as a pandering political puppet to the corrupt forces that coercively control it,” Ms Tame said.

The Prime Minister’s office has told journalists he did not know of the phone call until Tame raised it in her National Press Club address.

A survivor of child sexual abuse, she reiterated her call for nationally consistent sexual assault laws, ages of consent and definitions of sexual intercourse following a meeting with the country’s attorneys-general.

Morrison apologised on the floor of parliament on Tuesday.

The statement was among 28 recommendations from Sex Discrimination Commissioner Kate Jenkins’ review of its workplace culture.

It was triggered after Ms Higgins went public about her alleged 2019 rape in the office of then-defence industries minister Linda Reynolds.

“What you saw yesterday was a very sincere apology and that call for further action from the PM,” he told the Seven Network.

“Most certainly, the government is committed to implementing all 28 recommendations,” she told ABC radio.

“For (the apology) to be called a stunt is, of course, a matter for Ms Tame, but that is not my view.”

The Jenkins review found one-third of staff surveyed across Commonwealth parliamentary workplaces had been sexually harassed.

Morrison apologised for a parliamentary culture that had normalised bullying, abuse and sexual harassment.

“The place that should have been a place of safety and contribution turned out to be a nightmare … but (Ms Higgins) had the courage to stand, and so here we are,” he said.

“It is clear that practical and cultural changes are necessary to make our parliamentary workplaces safer.”