The Palaszczuk Government has been embarrassed by yet another collapse of a misconduct case against a former mayor, the latest in a series of prosecution debacles overseen by the state’s corruption watchdog.

Prosecutors on Thursday dropped their misconduct case against former Moreton Bay mayor Allan Sutherland, who was pursued by the Crime and Corruption Commission over what it alleged was improper influence over a council project involving land he owned.

Sutherland had to exit as mayor in December 2019 because of the allegations, only to see the case against him collapse.

It follows the failure of several CCC cases against former mayors and councillors which have caused massive upheavals in the local government sector and led to questions about the fitness of commission chair Alan MacSporran for the job.

Outside court, Sutherland – a 25-year veteran of local government – said the CCC was “out of control”.

“The organisation is broken; there is no doubt about that,” he said.

“They have systemic problems throughout their organisation and I’ll be working with whoever it takes to see that another mayor doesn’t have to go through what I’ve been through.”

The commission has now failed to stand up a total of 15 of the 25 separate misconduct cases against mayors, councillors or council employees it has pursued recently.

The Local Government Association of Queensland repeated its call for Mr MacSporran to quit, with chief executive Alison Smith writing to Premier Annastacia Palaszczuk demanding he be removed from his post.

However, Deputy Premier Steven Miles again declined to criticise the CCC’s performance, saying it would not be appropriate for him to pass judgement on an organisation that was meant to monitor the government’s integrity.

He ducked questions over MacSporran’s future, saying it was a matter for the Parliamentary Crime and Misconduct Committee, which issued a damning report on the CCC’s performance last year but stopped short of calling for the chair’s sacking.

“I’ve only just seen the news regarding mayor Sutherland. Obviously it’s a matter I’ve monitored closely …but I’ll look at the detail of what the court has said and take that into account,” Miles said.

“No doubt though this is a matter that will be considered by the PCCC as they have been.”

Asked if he wanted MacSporran to continue to CCC chair, Miles said the commission’s job was to “oversee” executive government but its performance was being closely monitored by the parliamentary Crime and Misconduct Committee.

On Thursday, prosecutor Sarah Farnden told the Brisbane Magistrates Court submissions from defence barrister Saul Holt had been considered and the Crown had decided not to proceed further with charges.

Prosecutors had accused Sutherland of trying to influence the timing and scope of a council project between December 2017 and December 2018 despite having a conflict of interest.

Last year, the CCC’s pursuit of eight former Logan City councillors ended up in the fraud charges against all of them being dropped.

Sutherland said change could not happen with the “current top echelon in place” and the public would be appalled at the way the CCC operated, which included recording 8000 of his phone calls.

“That’s a fishing trip,” he added.

“They’re not after anything else, but they just sit on the end of your phone listening for months in, months out.”

Those charges came when the council sacked then-chief executive Sharon Kelsey after she passed information to the commission about alleged misconduct by Mr Smith. 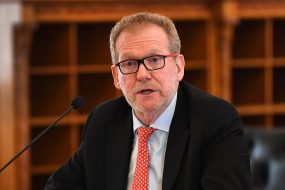 In October Gold Coast police officer Superintendent Michelle Stenner was acquitted of perjury after a second trial when a jury found none of three charges of lying to the CCC could be proven.

Ms Smith said following the events in court this morning, the LGAQ has written to the Premier asking that MacSporran be removed.

“If he will not go then the State Government and the Parliament must act to remove him,” she said.

“The CCC’s role is too important. The reputation of local government has been tarnished – over and over. Queenslanders need to have confidence in the watchdog and that confidence cannot be restored until the Chair either stands down or is replaced.”