For Australia’s Foreign Minister Marise Payne, her Beijing counterpart Wang Yi is the guy who puts her on hold.

The pair were together early this month in Guiyang, a provincial capital in central western China about six hours by train from Hong Kong. It was red carpet stuff for Eoe, who was on his first overseas trip as foreign minister.

It also marked the restart of face-to-face diplomatic relations between China and the PICs or Pacific Island Countries, an area of great strategic, economic and military interest to Beijing. 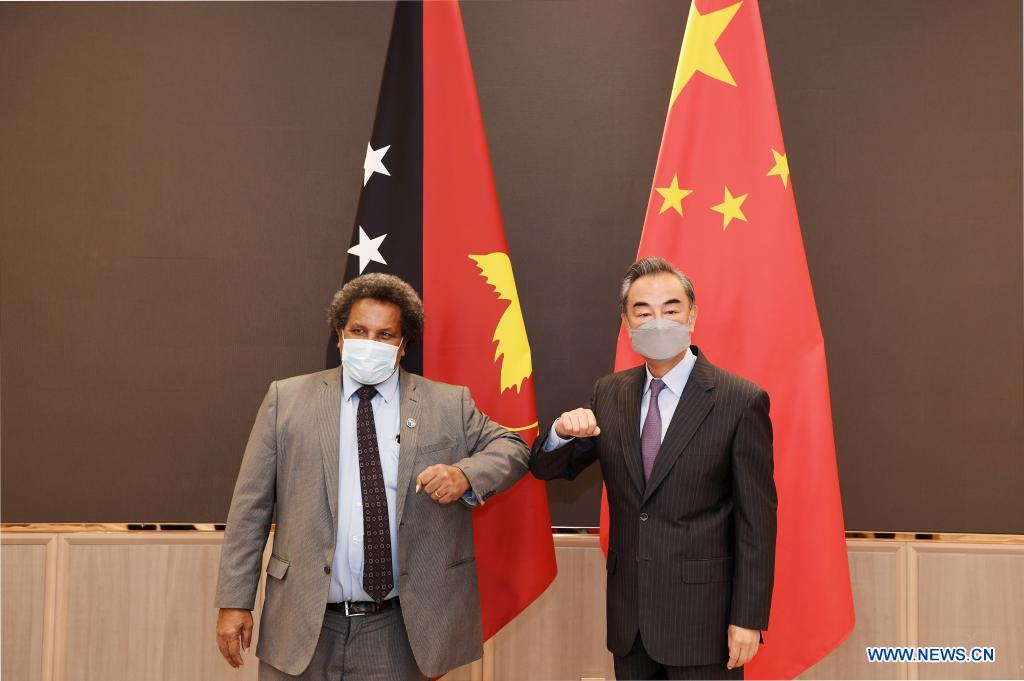 Australia should take this visit very seriously, although signs from Canberra generally and the R.G. Casey building (Foreign Affairs HQ) in particular suggests a lack of curiosity.

Looking back on the past 18 months (at least), Australia has been caught napping when it comes to China and the Pacific.

It makes Prime Minister Scott Morrison’s rhetoric about stepping up in the Pacific to match and better Chinese efforts to charm and enchant nations hollow and without consequence.

What happens in Papua New Guinea matters and nowhere does this intersection assume greater importance than in Queensland. You can just about walk from the northernmost Torres Strait islands to the southern PNG isles at low tide.

Our quarantine services fight against animal-borne diseases like screw worm fly and, recently, any transmission of COVID-19.

China has not wasted the latest global crisis and, as far as its outreach into its neighbourhood (and beyond) it has had a very good pandemic.

The high level Wang Li/Soroi Eoe summit, full of smiles and generous promises, is the latest example of Australia not paying enough attention to our doorstep.

To say you couldn’t fit a cigarette paper between the post-summit positions of Yi and Eoe is no exaggeration. It was like looking at a puppet play where the puppeteer was holding the strings on behalf of the Chinese Communist Party and the PNG neophyte minister was doing the rest.

Here’s some of what Eoe had to say to the Port Moresby-based Post-Courier after his meeting with Yi: “PNG hopes to deepen exchanges on state governance with China and draw upon China’s development experience, achieving common development and prosperity and building a community with a shared future between China and Pacific Islands countries.”

“Papua New Guinea firmly upholds the one-China policy and always believes that Taiwan is an inalienable part of China. Papua New Guinea and other PICs firmly oppose Japan’s discharging of nuclear waste water into the Pacific, and will jointly resist Japan’s irresponsible behaviour with China and other countries.”

They couldn’t have been more on song without a word of criticism for blatant and persistent human rights abuses in Hong Kong and Xinjiang from Eoe.

The busy end of China’s interest in PNG was seen at its most direct late last year when the two countries signed a $200million “deal” between the fishing port of Daru – just a few kilometres from Australian territory – and a state-owned corporation.

It’s similar to a range of generously-backed proposals China has been rolling out in our region in the last year: a plan to build a port in Western Samoa and an airstrip scheme for the Kiribati island of Kanton (population 20). China has also rolled out plans and money in East Timor, causing some analysts to suggest we may have a Beijing client an hour and 20 minutes from Darwin.

Eagle-eyed watchers of Pacific politics are alarmed. Brisbane-based analyst Jeffrey Wall says PNG, Samoa and Kiribati could go the way of Vanuatu which signed a $115 million port deal with China more than six years ago, but is struggling to make it pay, putting authorities in Beijing’s financial claws.

Wall charts what he calls an “exports to China stranglehold” working in a variety of primary industries in the region, particularly high value products like coffee and seafood.

He says Australia needs to increase its efforts to get into markets being worked by China or risk losing further influence across the region. “If we don’t do so urgently and comprehensively then China’s dominance of agricultural exports from the region will be absolutely entrenched,” says Wall.

“And when that occurs the chance of lessening the region’s economic dependence on China will be just about zero.”

Morrison ignores this while playing populist Chinese politics. He likes to shake the trees of fear and evokes conflict. However, when it comes to the practical, hard work of managing relationships with our closest neighbours he has failed.

China loomed large at the weekend G7 summit in England’s Cornwall seaside retreat of Carbis Bay where US President Joe Biden wanted a moment when the West toughened its stance towards China, developing a “democratic” alternative to China’s Belt and Road Initiative.

Washington believes the BRI is spreading Beijing’s influence – complete with unsustainable debt and poor labour standards – across the world. Morrison’s lack of attention to what’s happening in our region adds to, rather than alleviates, far reaching, very consequential events.

Wall has an ambitious list of things Morrison could do, from taking over PNG’s dysfunctional health system to a total overhaul of the Asian Development Bank and across the board intervention in governance across the region.

At the moment, we appear to be happy to hear from Pacific leaders there’s nothing to worry about, China’s intentions are good and everything will be fine at the end of day.

There’s only one winner if you believe that: Beijing.