“Shocked by murder of Afghan civilians and prisoners by Australian soldiers,” he posted to Twitter on Monday.

“We strongly condemn such acts and call for holding them accountable.”

Morrison said the falsified image was utterly outrageous and the Chinese government should be ashamed.

“It diminishes them in the world’s eyes,” he told reporters in Canberra.

“Australia is seeking an apology from the ministry of foreign affairs, from the Chinese government, for this outrageous post. We are also seeking its removal and have also contacted Twitter to take it down immediately.” 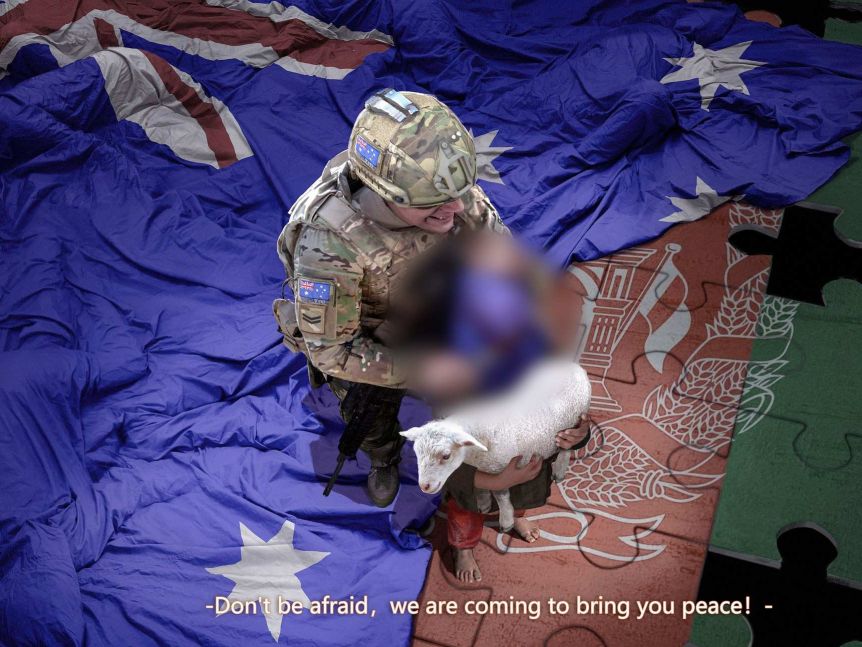 China intensified its condemnation of alleged war crimes by Australian soldiers in Afghanistan after Russia made similar comments.

“We can take pride in the work of our servicemen and women,” he told the ABC.

“Unlike other countries who may sweep these things under the carpet, we undertook a thorough investigation, we’re applying remedies to address it.”

“This is the Russia that was responsible for the shoot-down of (Malaysian Airlines plane) MH17 over Ukraine, the invasion of Crimea, support to Assad in Syria in murderous ways,” he told ABC radio.

“To hear these comments from the Russian foreign ministry just tells me the height of hypocrisy that the Russians are prepared to go to in their sustained attack on Western democracies.”

Meanwhile, pressure is mounting on General Campbell and Prime Minister Scott Morrison over plans to strip more than 3000 soldiers who served in Afghanistan of their meritorious unit citations.

Tens of thousands of people have signed a petition demanding only veterans convicted of war crimes have their citations revoked.

Independent MP Andrew Wilkie is urging the federal government to drop all charges against the former military lawyer who blew the whistle on the alleged war crimes in Afghanistan.

He said David McBride should be praised but instead is facing the possibility of spending the rest of his life behind bars.

Attorney-General Christian Porter told parliament it would be inappropriate for the government to intervene in the case.

Porter said laws giving him the power to stop such a case had never been used.

“Such an intervention would be utterly extraordinary and would necessarily, by its very nature, represent political intervention in a process which has conventionally been independent,” he said.

The Commonwealth Director of Public Prosecutions has declined to comment as the case is before the courts.