There was his rambling declaration of “victory” in the White House East Room in the early hours of the morning after election night.

He popped up a couple of days later in the press briefing room to make more baseless claims of electoral fraud, prompting the big TV networks to cut away from his speech.

He visited Arlington National Cemetery last week to mark US Veterans Day, and then appeared in the White House Rose Garden to talk up coronavirus vaccines.

Other than being briefly filmed on his way to and from golf, with one trip including a drive-by of his supporters marching in Washington on the weekend, that’s been just about it from the showman in the Oval Office.

We know from his tweets the President is not dealing well with his loss.

He continues to insist, sometimes in capital letters, that he won the election, and is still making all sorts of unfounded allegations of election day skulduggery.

I WON THE ELECTION!

He is lashing out at those who dare question him.

He Twitter-sacked Christopher Krebs, the government official who declared there was no evidence of election fraud.

…votes from Trump to Biden, late voting, and many more. Therefore, effective immediately, Chris Krebs has been terminated as Director of the Cybersecurity and Infrastructure Security Agency.

Trump is variously reported as being sullen, angry and defiant.

He is said to be spending a lot of time watching TV and suggesting all sorts of improbable ways he can still win.

“Trump is simply trying to survive from one news cycle to the next, seeing how far he can push his case against defeat and ensure the continued support of the Republican base.”

A person close to the President told NBC News that Trump’s stubbornness will end up harming him.

“It distracts from the legacy he has to be proud of and marginalises him. It does not behoove him to drag this out further,” they said.

His pre-occupation with the election comes at the expense of running the country.

The President’s schedule has not included a classified intelligence briefing for weeks.

CNN reports that while members of Trump’s coronavirus taskforce briefed US governors earlier this week from the White House situation room, the President was upstairs following legal developments in Georgia and Pennsylvania.

Trump has talked about vaccines, but he has been absent from duty as the US coronavirus death tolls surges past 250,000. 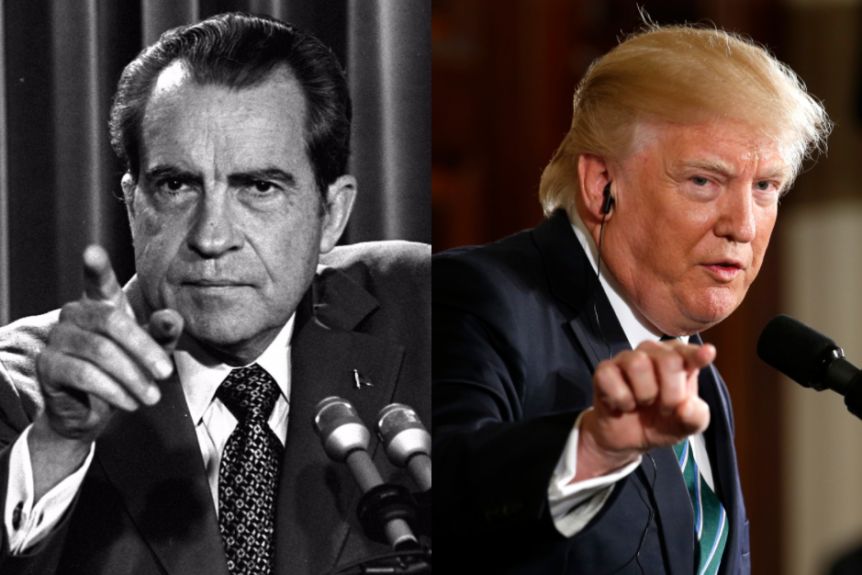 As with Nixon, there appears to be an air of unreality with Trump.(Reuters)

Despite all the power and prestige it carries, the job of president of the United States can be one of the loneliest in the world.

No more so for a man who feeds off public interactions, be it the roaring adulation of his supporters at Trump rallies, or engaging in the blood sport that are his encounters with the press corps.

What would not be helping Trump’s mood is the wall-to-wall media exposure his predecessor Barack Obama is getting at the moment as he plugs his forthcoming memoir.

Obama has been urging Trump to concede and is also expressing deep fears about the future of US democracy.

At the same time, we got an insight from Number 44 into the world the President is currently stuck in.

“The essential strangeness of the presidency is the isolation, both because of security issues and the nature of the job.”

That isolation is clearly serving only to increase the decibels of the echo chamber Trump is listening to.

Loyalists are telling him to fight on, while many privately concede it is all over.

Parallels are being drawn with the last days of the Nixon presidency.

According to son-in-law Edward Cox, Nixon spent the final hours before announcing his resignation wandering the halls of the White House in an irrational state, talking to pictures of former presidents.

While nobody is suggesting Trump has got to this point, there does seem to be an air of unreality within the President’s inner circle.

No-one is seemingly prepared to tell the emperor his clothes have been sent to the cleaners.

She likens him to a “pathetic, unravelling diva” who refuses to acknowledge the Hollywood dream is over.

Seizing on some particularly arch tweets from presidential historian Michael Beschloss, Dowd draws parallels between Trump and Norma Desmond, the has-been actress in the 1950 film Sunset Boulevard whose cronies keep alive the fantasy she is still a star.

“Mr DeMille has just called, Mr President. He says he’s ready for your close-up. Keep your pancake makeup on and step out of the house now. The cameras will be waiting.”

The final scenes of the Trump presidency are being written.

Everyone on the set is increasingly anxious as the main character continues to brood in his trailer, nursing his grievances.

Where the script goes from here is anybody’s guess.