Harking back to the period in which then deputy premier Jackie Trad, the Member for South Brisbane, had responsibility for the project, the Opposition accused the government of seeking political benefits out of a new Boggo Road Station and refurbished Dutton Park Station. An alternative proposal for a new Dutton Park station would have been cheaper and closer to the Princess Alexandra Hospital precinct.

Trad has previously been accused of moving new rail services closer to her electorate and a former investment property but denied that was the motivation for the project design. She later resigned from Cabinet, amid integrity questions, to focus on her campaign for re-election and the threat posed by the Greens, and LNP preference deals, in South Brisbane.

The LNP today relied on documents provided by a “whistleblower” who speculated that the chosen alignment and stations came with major engineering problems and could cost taxpayers an additional $1 billion. Tabloid newspaper The Courier-Mail had questioned whether it was the “largest government scandal in state history”.

Opposition leader Deb Frecklington said the government had “overruled expert engineering and safety advice about Cross River Rail in favour of the Member for South Brisbane’s own plan for Boggo Road and Dutton Park station”.

But State Development Minister Kate Jones, who took responsibility for the project earlier this year, said all options had been considered carefully by the government and the final proposal remained the “superior option” for Queensland. 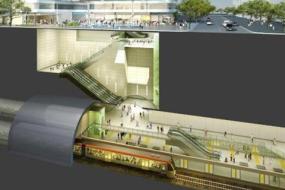 Jones said the government found the alternative proposal would have delivered less benefit and would inconvenience commuters, requiring some passengers on the Gold Coast and Cleveland lines to backtrack and walk eight minutes to change trains.

Without going into detail, Jones conceded the southern alignment of the project still had problems that were being worked through. She maintained, however, that any additional costs would be absorbed into the $5.4 billion price tag.

“Regardless of which station was chosen this alignment was going to be complex and we are dealing with it appropriately,” Jones told parliament.

The engineering solutions for the southern alignment have yet to be finalised, even as work continues at various sites, but Jones said the outlook was positive.