Monarchists happily fanned any helpful misconception they could seize on before Australians voted on the referendum to become a Republic in 1999.

There are more than 30 Republics among the 54 countries competing in Birmingham right now at the Commonwealth Games.
Of course, Australia would retain its position at the Games just as India, South Africa, Fiji and so many other nations have since becoming Republics.

It would mean a different flag being raised at medal ceremonies for the future Emma McKeons and the next Ariarne Titmus. That’s a whole different realm for debate in the future.

There’ll be some of you reading this column who have barely watched the Commonwealth Games over the past week or found it impossible to get the body clock synced to when the finals are on TV.

For others, not switching on it will be deliberate. Footy, footy and more footy is never enough. Still others will have dismissed the Com Games as second-rate and not worth a glance because they are not the Olympics.

The Com Games have never purported to be the Olympics. They have a unique rhythm, history and appeal all of their own as The Friendly Games. I’ve always been a fan. As a kid, I can still remember being given stickers and stamps as a gift from the 1974 Commonwealth Games in Christchurch.

Those who ridicule the standard of certain events often never highlight those events where it is as hard to win a medal as in any Olympic field like the 100m on the track or the men’s marathon. Or they overlook that Titmus. Madi Wilson, Mollie O’Callaghan and Kiah Melverton swimming a world record in the 4 x 200m freestyle relay actually means “best in the world…ever.”

The Com Games serve many different purposes for the host city. It’s not just about sport and ticket sales for Birmingham.
Bringing people together and improving health and wellbeing in the city and England’s West Midlands are legacy aims as well as heightened inclusivity and purpose in the region.

One of the very best aspects of the Commonwealth Games is the integrated program so that athletes with a disability compete on the same stage with able-bodied athletes. Nothing helps more to break down mindsets and create an often unexpected buzz from watching the emotions of such inspiring strivers.

It’s 40 years since Brisbane hosted the 1982 Commonwealth Games. The sporting festival helped the awakening of the entire state.  It was uniquely Queensland with a march past by surf lifesavers included in the opening ceremony at the old QEII Stadium.

It was even more so when Queen Elizabeth II was photographed watching the athletics from the grandstand. She was peering at an official program but the full colour ad on the back cover made it appear as if she was holding a can of XXXX. 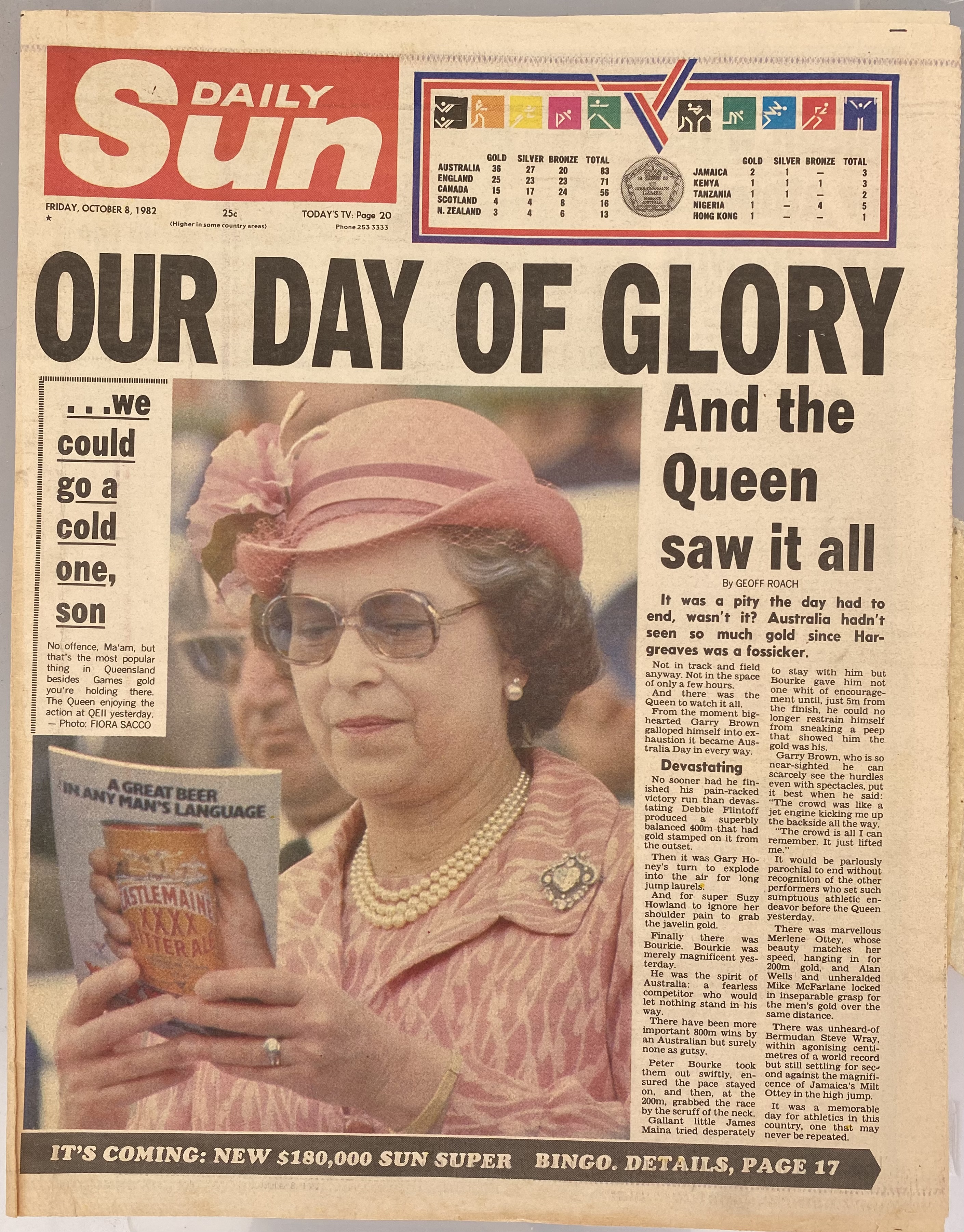 The famous front page of the Daily Sun that captured the Queen with her hands on a XXXX at the 1982 Commonwealth Games.

It was a front page photo for the Daily Sun, a new newspaper for Queensland which had been opened just two months earlier.
“…We Could Go A Cold One, Son” was just as Queensland as the headline.

We might cringe at mullet mania at the moment. In 1982, our poor Aussie women were cringing at being stuck with culottes as part of their official uniform.

Queenslanders lapped up 24-hour liquor licensing for the first time. The Sunnybank Hotel was a mecca for fun, hijinks and athlete romances.

“Look what it started for Queensland,” is always the line from 1982 Commonwealth Games boxer Benny Pike.
He’s right. The 2032 Olympics wouldn’t be coming to Brisbane but for 1982 and the 2018 Gold Coast Commonwealth Games.

We wouldn’t be celebrating Emma McKeon’s astonishing deeds in the pool but for the Brisbane Commonwealth Games either.
Her parents Ron McKeon and Susie Woodhouse were both swimmers on that team and the charged atmosphere helped nurture their romance.

Ask the athletes themselves how much the Commonwealth Games mean. McKeon and Titmus were two who decided not to go to the recent World Championships in Budapest because the allure of the Com Games was greater.

You can’t simply turn up at the Olympics as your first big event and expect to win. Handling the emotions and programming of a multi-sport event like the Com Games is perfect preparation.

Young Queensland freestyle star Mollie O’Callaghan will have to handle a whole different level of recognition after upsetting McKeon to win the 100m in Birmingham to go with a bunch of relay gold. She flew under the radar before the Tokyo Olympics last year. Her Com Games success will let her practice handling the spotlight before the Paris Olympics in 2024.

There’ll be youngsters across Queensland watching the Com Games on TV and seeing gold medals, golden smiles and wishing they could be the next “Mollie O” or the next Maddi Levi, who hopped from AFLW with the Gold Coast Suns to try-scoring whiz in rugby sevens. Those same youngsters will be learning lessons from how athletes handle very differently the joy and hurt of winning and falling short.

Some will already be training a little harder or asking mum how much it costs to buy a cross-country mountain bike because it looks such a cool sport.

These are seeds of inspiration to compete in Brisbane in 2032.

That will mark 50 years since the Commonwealth Games in Brisbane when the city started to come of age.