In the long line of political ratbags Queensland has sent to Canberra, Senator Gerard Rennick might just snatch the gold medal.

And the competition has been stiff. Clive Palmer. Pauline Hanson. Peter Slipper. George Christensen. Malcolm Roberts. Andrew Laming. All of those have been from the conservative side of politics, although Labor’s Mal Colston tried to make it onto the medal dais too.

Before this week, how many Queenslanders had even heard of Senator Gerard Rennick, who we elected in July 2019 to represent the State?

No-one I could find yesterday. No-one. But we should, because he has no right to represent us in the shoddy way he is now – and he needs to know that.

His views are so extreme – and so polar to what most of us believe – that it raises the question of why we even pay him to turn up. And what we can do when our politicians don’t listen to the people they represent?

On paper, Gerard Rennick looks the real deal. From the Darling Downs, he received a commerce degree from the University of Queensland. He then went on to nab a master’s degree in taxation law, as well as a master’s degree in applied finance from Financial Services Institute of Australasia.

But, as we teach our children, academic ability is not a vaccine that prevents stupidity and the national contribution by this father-of-three looks more like a bid for attention, than anything based on fact.

His latest foray into public debate, arguing against mandated vaccines, does not reflect the views of those he serves.

His Facebook page, and please don’t add to his viewer count there, is brimming with anti-vaccination stories that are fuelling the silly and dangerous mob that are gathering in public places each weekend with gallow-talk and abuse directed at those attempting to keep the nation safe.

Should he be obliged, as a Senator, to check the information he is espousing? Particularly when he is representing our views, nationally?

While he’s basing his vaccine argument on some convoluted idea of constitutional freedom, he’s aligning himself to the same camp as those who are threatening politicians and attacking Australians who are double-dosing in a bid to keep their families safe.

He, along with a few of his friends, is on a chaotic mission to ensure his party loses government. And this week, his lack of nous showed through when he allowed Labor and the Greens to suspend an inquiry into the ABC and SBS.

But politics and meeting with constitutional laws and re-election chances aside, Gerard Rennick’s anti-vaccine stance is undermining public health experts, fueling the ignorance of a small minority, and hindering vaccine rates. 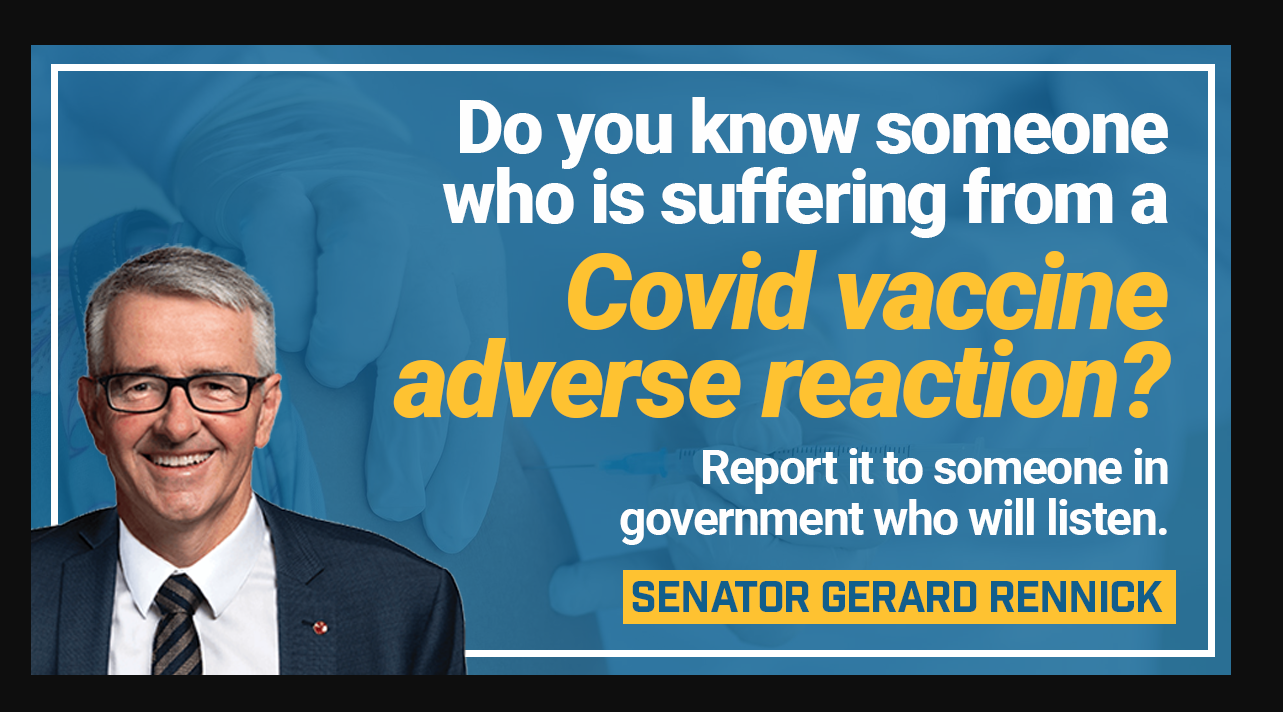 To this point, we’ve been lucky that his silly, fictitious views have been aired and dismissed quickly. Most of us haven’t heard of them, or him.

But perhaps the silver lining in the latest cloud over Scott Morrison’s team is that people want to know, now, why this dill is speaking on their behalf.

He does, after all, believe that the Bureau of Meteorology tampered with temperature data to promote global warming hysteria.

And he’s claimed that helping three-year-olds to pre-school is a Labor Party plot to strengthen government control over child raising.

Superannuation, he’s reported as saying, was a ‘cancer’. And our ties with Russia apparently need to be closer because ‘they’re part of the West; they drink, they’re Christians, they play soccer, they’re Caucasian’’.

Good God. Is there any doubt why so many voters eschew politics? But how can we ensure those we elect represent us, at least sometimes?

Why did we send Senator Gerard Rennick to Canberra? Did you even know you’d done that?

Perhaps we wanted to ensure his party loses the next election? Or for some it might have been in support of some sort of low-rent dinner party entertainment? Or so that Queensland can continue its long run as a political laughingstock?

Whatever the answer, Gerard Rennick doesn’t deserve our support. And voters need to remember his name, so that we don’t give him a second term.