Francis Richard Burnett, loving husband of Beverly (deceased), and father to sons Michael, Matthew and Tony and daughter Andrea. has passed away peacefully in a retirement home on the Gold Coast, aged 91. His family has honoured his request for a private burial ceremony.

There’s the occasional death notice that doesn’t quite do justice to the life that’s been led, nor capture the contribution made to a local community, for as long as anybody can remember.

For a good number of his 50 years in the brewing game, Frank Burnett was Mr XXXX, as close to you’ll get to the cheeky little character with the branded boater that still today winks at passing motorists, as they edge their way home along a congested Milton Road of an evening.

If you weren’t already tonguing for a beer, the illuminated brewery icon was a reminder to a crack open a cold one, even before you kissed the Mrs or patted the dog. The order of those events was different for everybody. It should be pointed out that, with Frank, it was always wife first.

Burnett was born with beer in his blood. His grandparents Dell and Jack were long-standing, and successful publicans, His father, Frank Snr, was a senior sales figure at the brewery, back in the days where there was no craft beer with passionfruit infusion, a gentle undercurrent of coriander, and a hint of smoked thyme.

It was XXXX Bitter Ale, in a tallie or a stubbie. The choice was entirely yours.

After graduating from Gregory Terrace, Burnett enrolled in a Science degree at Queensland Institute of Technology (now QUT), his accumulative insight into chemistry providing the gateway to a production job at the Milton brewery.

His father may or may not have helped open the doors. The records are a little sketchy.

Frank was a cocky young bloke. Senior management at the time decided to send him up to the range to work at the local Perkins brewery in Toowoomba. It was leaking cash, and destined for closure.

The head honchos at Castlemaine figured experiencing failure at an early age would knock a bit of the bravado out of young Burnett.

But within a short period of time, on the back of his youthful direction and exuberance, the Perkins brewery began making money. Good money.

Instead of shutting it down, they merged the regional brewery with the Brisbane operation. Castlemaine Perkins was born.

Over the ensuing decades Burnett worked closely with some of the best – at the top of that list, long serving CP “general manager” Paddy Fitzgerald, another who at a pinch could be mistaken for the cheeky little bloke in the boater.

There was also legendary brewer Otto Haag, the man responsible for the modern day XXXX Bitter Ale, which at one point in Queensland’s thirsty history accounted for two in every three beers sold in the state. Tallie or stubbie, and by late 1970, steel cans – the range of choice was becoming ridiculous.

In 1980, when Fitzgerald’s predecessor, the venerable Jack McDonald, died suddenly, Frank Burnett was parachuted into the big chair, and from there, the legend grew.

In that era, there was no more prestigious station in town. Burnett had a hotline to everybody who was anybody – the State Premier, all the other captains of industry, power brokers, there was nobody who wouldn’t take Frank Burnett’s call.

He had a chauffeur for God’s sake – Harold, a one time alcoholic who Burnett had rescued from the professional scrap heap. You don’t reckon Harold went the extra yard for Frank? Yes, Mr Burnett. I’ll leave right away – will be there in four hours.

Night or day, late or early, no pickup or drop off was out of Harold’s range. Their relationship provided another insight into Burnett’s persona. He loved people, and was always on the lookout for opportunities to help. 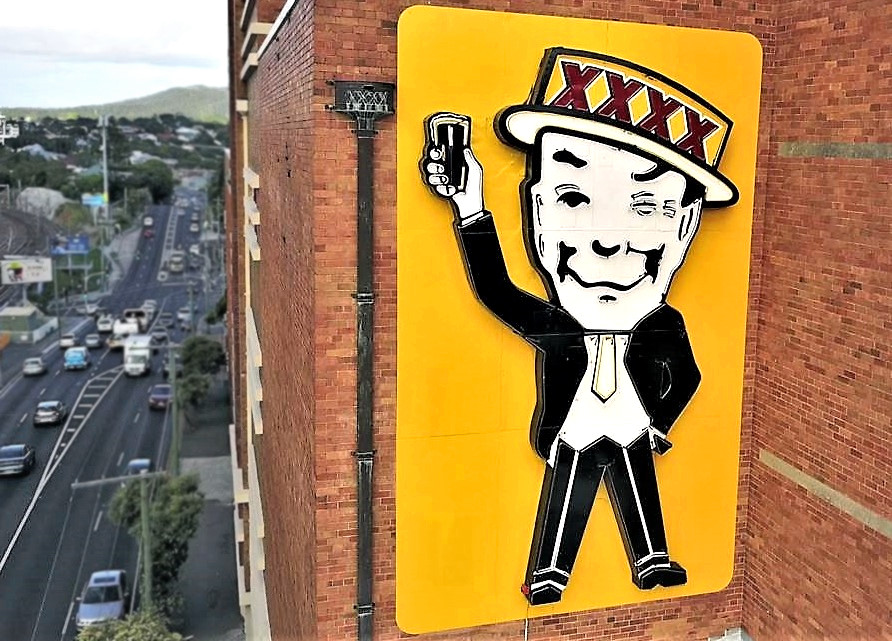 Many believed the Mister Fourex icon was based on Frank Burnett.(Photo XXXX)

In less cosmopolitan, more liquid times, XXXX commanded an astonishing 72% of the total Queensland beer market. It was the beer for up here.

However as Burnett learned one day, when Paddy Fitzgerald took him on a “trade visit” to Toowoomba, XXXX was not everybody’s first choice.

The pair stopped in for quick refresher at Withcott, at the foot of the range, but when Fitzgerald ordered a couple of XXXX pots, the gruff publican behind the bar told them bluntly: “We don’t serve that here.”

“There’s a sign on the roof of your hotel that suggests you do,” Fitzgerald responded.

The publican didn’t miss a beat. “There’s also plenty of birdshit on the roof – we don’t serve that either,” he snarled.

Righto – point taken – give us a couple of Bulimba Gold tops instead!

Fitzgerald quickly worked out it was not an argument he was going to win.

For all his brewing industry street cred and experience, Burnett’s corporate journey was like a never-ending marathon. Just when he thought he’d reached the finishing line – the race would be extended.

Not long after he assumed the reigns of XXXX, Alan Bond appeared on the scene, expanding his existing brewing interests in WA (Swan) and the US by acquiring Castlemaine Perkins, Tooheys in NSW, and West End in SA.

Overnight, Burnett was reporting to a bloke who thought it was a good idea to change the address on the XXXX label from Milton, Qld to St Georges Terrace, Perth.

“The beer from up here” was suddenly “the beer from over there”. Frank warned him. “You’re making a huge mistake Alan – don’t do it. The drinkers won’t cop it.”

And they didn’t. The XXXX market share plunged overnight. Parochial lot, Queenslanders – the regional slur of course being the catalyst for the launch of Powers Brewing.

Burnett, while cautious not to trivialise Bernie Power’s bold ambitions, couldn’t resist a snipe when told after the launch, that the beer was simply fantastic. “Well you’re hardly going to go to a christening and tell the parents that the baby is ugly, are you?” he said, with a little hint of Irish catholic irony.

For several years, Burnett’s relationship with Alan Bond was at best fractious, more so after the XXXX chief’s presentation at a management conference in Hawaii.

The regional breweries were required to present their five year strategic plans. All the other MD’s arrived with colourful slides, impossibly detailed graphs and over-engineered mission statements.

With all the puff and pageantry out of the way, Frank stood up, slid a photo of a Queensland onto the overhead projector, supported only by the caption “Beautiful one day, perfect the next”.

“You wanna know how to run a brewery, come see me after morning tea,” he said, all too aware that XXXX more made money for its owner than the other three Australian breweries combined. And then he sat down.

He strongly suspected Bond would send him packing for his insolence, but the rambunctious businessman did just the opposite. “You’ve clearly got things sorted up there,” Bondy conceded. “I’ll give you something difficult to do – you can manage my son, Craig.”

Frank was up for most challenges in life, but that one was a stretch.

What “Georgie Boy” was very good at was spending his old man’s money.

Without even consulting Frank, Bond Jnr bought a 65m yacht for $98 million, all for the sake of “trade hospitality”.

Christened “XXXX Schooner”, the stunning three masted sloop, with 10 fulltime staff, was symbolic of the unfathomable excess of the era.

In Craig Bond’s world, nothing got in the way of a good time, certainly not shareholder interests.

They were heady times. The XXXX Kangaroos, the XXXX Australian cricket team, rugby, sailing, golf, surf lifesaving, horse racing. If it moved, XXXX sponsored it, if it didn’t, it was painted red and yellow.

When Bond ran into financial trouble and had to sell the sloop, along with everything else, New Zealand brewing company Lion Nathan, stepped into the fold.

The marathon finish was pushed out a little further. Frank Burnett had a whole new raft of brewing executives to educate.

As much as proud Queenslanders felt indignant about “their brewery” now being owned by a mob of Kiwis, Burnett privately conceded it was a good thing, so too the other key change in ownership which occurred in 1998, when Japanese brewer Kirin assumed control.

“You can hang on to the past, or you can move with the times,“ I remember Frank telling me, a couple of years into my tenure at the brewery.

Frank Burnett eventually retired at 2001, dedicating a remarkable five decades of his life to the one company, albeit under a few different re-incarnations.

He left a remarkable legacy, along the way enduring some mountainous challenges – a huge fire in 1973, the flood of 1974, and the great beer strike of 1978, when Queenslanders discovered how lucky they were to be drinking XXXX, and not Adelaide’s Southwark Ale.

In the early 90s, there was also “Project X”, which resulted in massive redundancies among brewery staff – some 200 in total. The purge of blue collar personnel cruelled Burnett – he regarded many as friends.

Frank Burnett passed away quietly in a retirement home on the Gold Coast on September 23, his will to live diminished by the passing of Beverley, his wife of 60 years, some six months earlier.

In typically understated fashion, the great man insisted there be no fanfare when his time came. He might have been high profile, but he was distinctly low key.

“In many ways Dad was an introvert who was uncomfortable in the spotlight,” his son, Tony, a successful fourth generation publican surmised.

“He just loved the brewing industry, and felt privileged for all it afforded him in life.”

Over the past week, as word of Burnett’s passing has gradually filtered out across the hotel trade, many senior figures have raised a glass to the man who embodied the goodness of the brewing and hospitality industry.

No choice in the brand of beer used in the toast.

*Michael Blucher worked in a senior management role at Castlemaine Perkins from 1996 to 2004.