Twice this week, I got sent surprise messages from people on the other side of the world.

One was a scam. The other was a thank you note that took 10 years to write.

Because I got the scam first, I very nearly didn’t respond to the second. I’m glad I did, even though I don’t think I deserve the gratitude it contained.

First, to the scammer…

A message popped up on my phone… “Hello Rebecca…” It was from a bloke I knew 20 years ago. Odd, I thought, but I responded with a wave.

He shot back a message… “I would like to bother you about something my friend but I’m kinda shy because I do not how you will feel.”

To that curious note I just typed two question marks.

The next message read… “I am in a little need of cash, please could you loan me some cash please till ending of the month.”

Ok, that was that. I figured he’d been hacked and let my real friend know via his wife. I almost felt sorry for the scammer because apparently no-one was forthcoming with cash despite the polite, albeit grammatically incorrect advance.

Keep in mind that in the first quarter of this year, Australians have already lost $63 million in scams.

So when I got a message from another unknown character, I was suspicious. He shared my surname, so I was a little intrigued. I clicked open the message from Charles Levingston.

“You may not remember this, but on October 13, 2011 you forwarded an email to me. I always tell the story of you having done that and what a “sliding doors” moment this was. Because you forwarded that email, I ended up getting a job at a bank where I’m now the CFO. I’ve been meaning to reach out for a long time to say THANK YOU THANK YOU THANK YOU! That’s it. Hope all is well! Warmest regards, Charles.”

Zero recollection. But I googled him, and discovered that Charles was indeed a real person who held the title of Chief Financial Officer at EagleBank in Maryland USA. He seemed genuine but I still thought he was mistaken.

I needed to know more. So, I asked him to explain what happened.

Charles sent back a very long message, far too long for a scammer to be bothered writing, with a list of his employment for the last twenty years and the story of how he met his wife.

He began his career in banking with the Federal Reserve in the US … working in Atlanta, Philadelphia and San Francisco. Eventually he ended up in Washington DC with his wife and first child on the way.

Here’s where I inadvertently got involved in the story.

Charles sent an email to the CEO of EagleBank. Because of our shared surname, the email response from the CEO accidentally got sent to me. Long story short, this is what Charles wrote to me this week about an email I redirected in 2011.

“You were kind and thoughtful enough to read through the chain and forward that email to me. Had you not done that, who knows?
Anyway, after you forwarded me the email, I was able to get the meeting and it went great.

Here I am four years later in an incredible position. Had you not forwarded that email, I think my life would be very different. I’ll forward you the email chain so you can see it.

I’ve told that story a few times and it always amazes me. I’m just so grateful there are kind and thoughtful people out there like you.”

Wow! All I did was forward an email and forgot all about it. But that’s quite the chain of events for which I’ve been given modest credit.

Charles did forward me the original email chain where I had wished him good luck with the job. 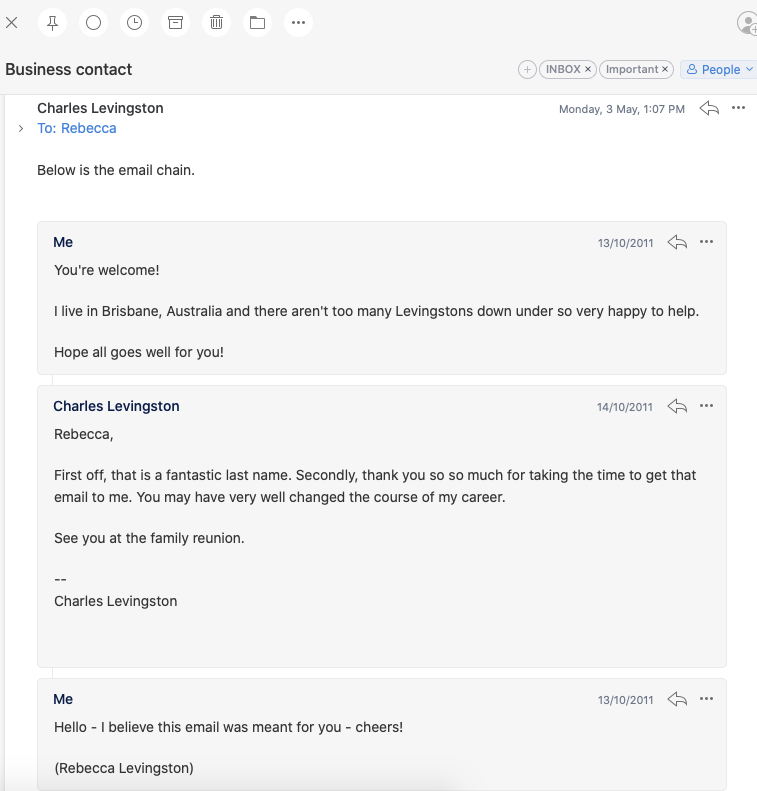 I asked Charles what prompted him to write a thank you note 10 years later.

“I don’t really know. I’ve been meaning to reach out for a while. I had a bit of a slow moment on Friday… I was just reflecting and feeling grateful. Reaching out to you came to mind again and I thought “let’s do it” this time.”

I’m glad he did. I think Charles probably would’ve ended up just fine work-wise, regardless of my email intervention. But I’m grateful he took the time to write.

I asked if he’d mind if I shared the story with you and he said he’d love that.

“You never know how small acts of kindness can impact another’s life.”