Robbie Williams fans may hasten to correct me, but I reckon it was late 2006 when he first performed at Suncorp Stadium.

Former Brisbane Lions CEO Michael Bowers, I’m guessing, would have been able to confirm the date.

He and club chairman Tony Kelly were at the concert, entertaining guests from Vodafone, who just that afternoon had been announced as the Lions’ new naming rights sponsor. A $2 million deal, at the time, rumoured to be the largest corporate sponsorship in the AFL. 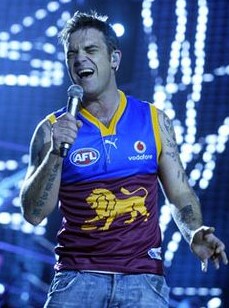 Can’t you imagine the delight of the Vodafone execs when Williams appeared on stage wearing a Brisbane Lions jersey, complete with the Vodafone logo emblazoned across the chest?

“You’ve got to be kidding me,” one of the Vodafone guests gushed, bewildered by what he was seeing from the comfort of their corporate box to the left of the stage. “How in the hell did you pull that off?”

“Just know a few people around town,” Bowers said, tongue firmly planted in cheek. The truth was, he didn’t have a clue.

The following day he’d learn the publicity stunt was the masterstroke of Luke Power, the club’s ever amiable midfielder, who while training at the Gabba, had spotted the English superstar with his minders, watching on, clearly intrigued.

Power, puppy dog friendly, in the company of the equally amiable Jonathan Brown and Simon Black, quickly befriended Williams, and at the end of their chat, presented him with an “XL” memento of his afternoon visit to Brisbane AFL HQ.

As the saying goes, in sport as in life, timing is everything.

For much of his 57 years, Michael Bowers’ timing was pretty damn good.

He was at the helm of the Lions for two of the club’s three AFL premierships, settling into the CEO role just after the first in 2001, then departing in 2010, before the decade long spiral when the Lions languished near the bottom of the AFL ladder.

Post Lions, Bowers would consult to the Brisbane Roar – they too were on the ascendancy. The part-time gig soon became full-time – Bowers was in the CEO chair by the time the Roar went back-to-back in the A-League at Suncorp in September 2011 – the club’s second remarkable come from behind victory in as many years.

Yep – timing sure is everything.

The cynics of course might question just what role the CEO plays in the on-field success of a team in any sport. And it’s a legitimate challenge – it’s not like they’re out in the middle, kicking goals and copping bruises.

But having worked in and around professional sport for two decades, I’ll say this much – if your front office is rubbish, your team’s got Buckleys. Bottom half of the table, at best.

Sadly, this week, Michael Bowers’ time ran out, his full and colourful life cut short by the invasive liver cancer that he believed he’d overcome.

Two weeks ago he was playing golf at Indooroopilly, where for five years he’d been a dynamic and constructive board member. On Monday night, he was dead.

It must be said, “Bomber” Bowers had his detractors. As a brash young lawyer about town, he ruffled a few feathers, even made a few enemies, a small portion of whom lingered. He was never short of an opinion or for that matter, confidence. Often wrong, never in doubt was perhaps one way of putting it.

But as he aged, he mellowed. Bowers talked less and listened more, championing the multimillion-dollar retirement village project that has all but secured the long-term financial future of the Indooroopilly Golf Club.

Bowers had grown up in one of the quiet side streets that ran off the main road out to the club. As a kid, he’d ridden his bike though the surrounding bushland, and fished in the Brisbane River.

In the later years of his life, he’d became a passionate advocate of creating suitable retirement living in the leafy inner-western suburb he long called home.

He was all too aware that the true legacy of any such project would be experienced by generations well beyond his own.

But hopefully he’d get a “quick lick” – get back to where all started.

As they say, timing is everything.