Tom’s late.  It’s only a couple of minutes past his start time. It’s 6:36am. But in radio, our whole shift is a series of tight deadlines.

Wake up before the sun rises, get your head around the daily news, rip into your early morning editorial, lock in talent, write scripts, scan for breaking news, get on air, get off air. Breathe.

So when Tom wasn’t at work on time and he hadn’t called, we knew immediately something was wrong.

Tom Greenard was my producer at ABC Radio Brisbane.

A devoted dad to two boys. A loving son to his mum Jenny back in England. A loyal Leeds United fan. Tea drinker, deep thinker. You never had a trivial chat with Tom, he loved proper conversation. He didn’t shy away from political fights. He was smart and curious. Cynical often, prickly on occasion and always quick to laugh. He loved limericks. He called me Becks. I can still hear his voice now.

Tom didn’t arrive at work on Wednesday, March 11, 2020. Normally he’d turn up, still sweaty from his bike ride, ready to roll into the work day. Not that day.

No response, no call back, no explanation.

My colleague Terri and I and were both immediately worried. Had he come off his bike? Or been hit by a car? Why hadn’t he called? I sent another text at 6:54am.

“Hi Matt, Tom hasn’t come into work – have tried his mobile (it’s off) – starting to worry about him. Hopefully he’s just slept in. Can you call when you have a sec please.” 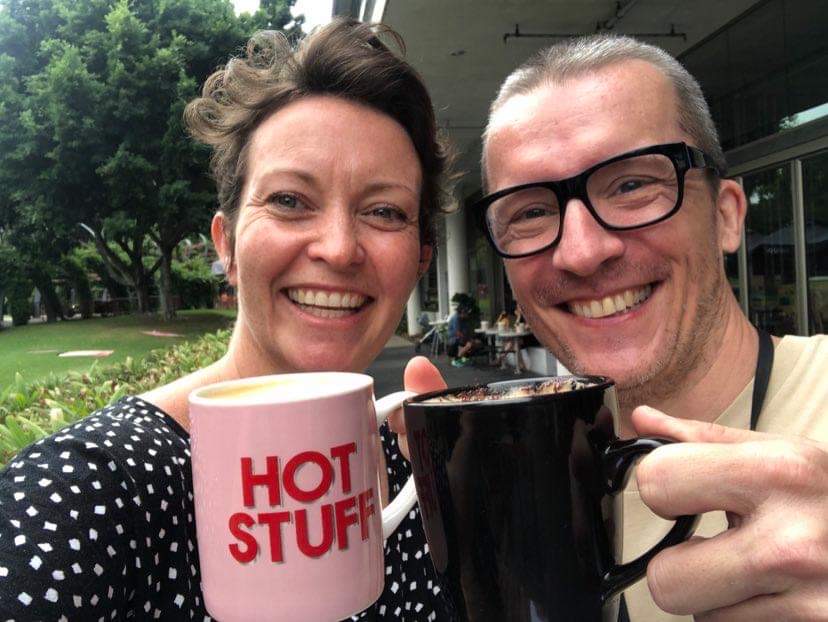 Rebecca Levingston with her friend and producer Tom Greenard, who passed away earlier this year.

Slept in? Unlikely. Tom was a radio veteran. He worked at the BBC covering news and sport, documenting moments in history.  He knew the value of time. He’d been a part of the ABC Brisbane team for years having moved to Australia where he was happy to be raising his sons in the Queensland sunshine. His best mate at ABC was Kelly Higgins-Devine who he produced over many years. They were a formidable team. Tom always turned up. But not that day.

My boss said he’d chase Tom up and that I should concentrate on getting the show ready. Deadlines, deadlines … the radio clock never stops. I called several colleagues to see if they could go to Tom’s house. They knew, we all knew, something was terribly wrong.

8:30am showtime … I had to get on air. I turned on my microphone filled with anxiety and adrenaline. Talk, talkback, news, weather, traffic. I pushed all the right buttons and said all the right things but I felt like I was out of my body. It all felt wrong.

In the 9am news break, I asked my producers Terri and Lachie (who was sitting in Tom’s chair) what was going on? Had they heard anything? Nothing. Nothing? I remember saying to them “How come we don’t know what’s happening?” They shook their heads. For a moment I wondered if they were keeping something from me.

It made no sense. A feeling of dread descended. We were all in the dark.  I turned the microphone back on and the next two hours were a blur.

At precisely 11am I turned my microphone off and the ABC news theme played. My boss opened the door to the studio and said, “Tom’s gone.”

Our friend Tom Greenard had died.  Suddenly, inexplicably, he went to bed the night before and never woke up.

We never got to say goodbye. I feel like we never got to truly grieve – 2020 thrashed and mangled and distorted the grieving process. Lockdown restrictions meant no funeral for us to come together and try to make sense of his loss.

It’s stupid how death puts life into such sharp focus.

Tom was 50 years old. We celebrated his birthday just weeks before at a party where he played the drums. His happy place was behind a kit. Tom’s rhythm in life deserved the applause we all gave him that afternoon at his party.

Some days I could cry like Tom’s only just gone. For his sons, his mum, his family, his close friends, this Christmas will be … well I don’t think I can find the words.

Families all over the world have lost loved ones this year and found ways to cope with anguish magnified by distance. Broken hearts and fractured grief will be the defining moment of this distressing year for some. I’m so sorry for your loss.