The sandstone parliament building at the end of Alice Street cops shade from the so-called Tower of Power, the monument to Newman government priorities across the road. Both will soon be dwarfed by the Queen’s Wharf casino complex and, perhaps fittingly, the parliament is far from busy, used more like a vintage conference centre than the centre of modern democracy in Queensland.

In 2020, parliament sat for only 25 days, compared to 39 in the pre-pandemic year before (not including seven budget estimate committee days last year). The standard of political debate hardly improved during the limited sittings, and the tit-for-tat interjections and ethics complaints cast a shadow over the whole process. By comparison, a Zoom meeting is more civil and organised.

So, it is somewhat ironic that the parliament building is now looking to shine, literally, through the replacement of the eighties’ era lighting system around the facade. A tender has been issued for LED lights to provide clearer illumination of the building, in much the same way as the major parties and candidates will seek to show themselves in the best light in the coming weeks.

If anything, a harsher spotlight needs to be shone on the politicians themselves, and how they have sought to create and control a ‘political narrative’ no matter how much damage they do in the process. Other agencies, and some sections of the media, have become complicit in this dumbing down of civic discourse, even though discontent ultimately breeds in the darkness.

Take, for example, the Crime and Corruption Commission’s belated report on the Premier’s former chief of staff, David Barbagallo. Depending who you believe, or read, Barbagallo was either cleared of corruption or should have faced disciplinary action for failing to manage his conflicts of interest. Premier Annastacia Palaszczuk was either justified in her defence of Barbagallo or complicit in an attempt to hide the truth, misleading parliament in the process.

As always, the most interesting facets are in the nuance, the devil in the detail, even if they don’t fit the rhetoric.

Today, Palaszczuk brushed off questions about the CCC finding she had misled parliament when she said Barbagallo had fully declared his interests and obtained advice from the Integrity Commissioner, which he had not.

“I really believe in my integrity and I will always tell parliament what I believe to be honest,” Palaszczuk said, even though custom would dictate that an MP should apologise for even unintentionally misleading parliament.

Pressed on whether she would apologise, the Premier said: “I did not mislead parliament.”

The CCC made clear that Barbagallo would have faced disciplinary action had he not already left the Premier’s office. How the complaints were dealt with, and how the Premier characterised his departure, only add to the intrigue.

Questions last year about her office dealing with the cruise industry were repeatedly dismissed – the CCC released text messages showing Barbagallo maintained a special interest — and when Barbagallo stopped working for her she insisted it was unrelated to the CCC investigation.

“I have accepted that resignation but I also just want to put on the public record that by no means says that he has done anything wrong,” Palaszczuk said at the time.

Yet Barbagallo went on leave, ahead of his departure date, around the same time as the Department of Premier and Cabinet received an EY report on the alleged conflict. The EY report by no means said Barbagallo had done everything right, and instead made recommendations to prevent the same thing happening again. If Barbagallo was not only allowed to leave, but given a parting endorsement from the Premier, both knowing he had a case to answer, then this smacks of a cover-up. It didn’t help that the Premier’s first response to the CCC report on Wednesday was to point out that Barbagallo had already left her office.

The CCC admits it is not finalising cases fast enough. But, at the same time, it has sought – and initially received government support for – rules that would prevent journalists and others from publicly revealing complaints to the CCC.

In a recent parliamentary committee hearing, CCC chairman Alan MacSporran rejected criticism of the move. In some pointed observations about the state of the media, MacSporran said journalists had an obligation to “behave responsibly and not simply chase a sensationalist headline, which a lot of this so-called freedom of the press (debate) is concerned with”. 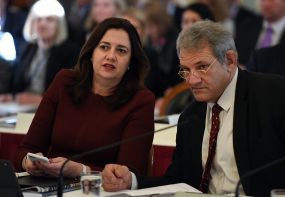 That is true, even if there is a clear distinction between the seasoned journalists who have learned how to responsibly handle these issues, and those who, often through no fault of their own, have to chase clickbait.

But the solution to this problem is not in releasing less information, or punishing the journalists, but by providing more information and allowing Queenslanders to be informed. The CCC creates a vacuum through its unwillingness to make public statements or respond to questions, instead allowing the political spin and media beat-ups to dominate the discourse.

It is worth remembering that Queensland was one of the first jurisdictions to introduce Hansard reporting of parliament, after an outcry over misreporting by the Moreton Bay Courier, now known as tabloid The Courier-Mail. The answer to misreporting wasn’t to release less information, and ban reporting of sensitive issues, but to proactively be more transparent. So why has evolution led us the other way?

Another thing about the parliament house building is that the sandstone tends to go black over time, and needs to be scrubbed back every few years. It goes without saying that there’s no point lighting up something that is tarnished.

Ahead of October 31, voters should offer up the scrubbing brushes, and expect the next elected politicians, and whoever forms government, to embrace the transparent spotlight of responsible journalism and civic discourse. That’s democracy.