The deeply unwanted message out of Auckland this week is that nowhere is safe from COVID-19. Not even the poster child of the pandemic, New Zealand — which racked up nearly three months without a new case — has been able to keep it at bay.

No one at this stage knows how a South Auckland man and his family contracted the virus and how many work and school colleagues have been infected. There’s no obvious connection with travel or recent entry to the country which, as in Australia, is limited to citizens and a tiny number of exceptions, and via quarantine. The number infected has now grown to 21.

The likely scenarios — that the virus penetrated NZ’s border restrictions Victoria-style, or that it has been circulating undetected in the community — are equally alarming.

Either way Auckland has been plunged back into strict lockdown and the rest of the country moved to stage two restrictions while authorities try to shut down the infection chains for all active cases, in line with NZ’s strategy of draconian but shorter shutdowns.

If it can happen in NZ it can happen in Australia’s COVID-free states. And while the response might not be as harsh as the Ardern Government’s this week, it would have inevitable consequences for state economies.

Until there’s a vaccine — a phrase that’s launched a thousand hot takes — we’re living on a tipping point. One day relatively normal life; the next, lockdowns, school closures, panic buying, queues and rationing. 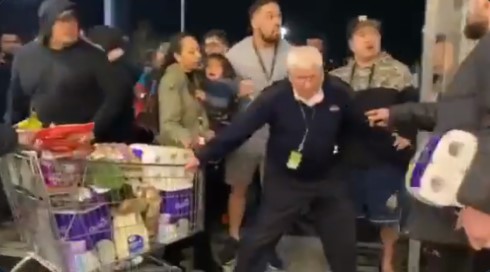 Previous experience seems to have trained consumers to get their panic in early and hit the toilet paper and pasta aisles as soon as rumours of lockdowns begin circulating on social media. Maybe next time we’ll all have stocked up ahead of time.

Great for big retailers, abysmal for other businesses considering investment.

Lack of investment will remain the persistent problem in job creation in coming years. It was a problem in Australia before the pandemic: the government predicted it would be a disaster this year pre-Victoria (July’s forecast was for a fall in non-mining investment this year of just under 20 per cent) and it will be much worse now.

The challenge for many businesses will be paying down debt once banks end their repayment moratoriums — not borrowing more.

Who wants to invest during a tipping point in which lockdown and panic could ensue at any moment?

This puts into context the claim of big business, the Government and their cheerleaders in the media that sprinkling a little magical economic reform dust on the economy will turn around business investment.

Businesses weren’t investing before the pandemic, not because it was too hard to sack workers and cut wages, or because the tax rate paid by large and multinational corporations was too high, or because the GST was too low, or there was a forest of red tape for business to navigate — but because, in the words of the Reserve Bank in February, “slower domestic demand has weighed on non-mining investment”.

The RBA, consistent with that, now doesn’t expect non-mining investment to pick up until after consumption picks up — well into the 2020s.

That’s assuming we don’t end up in a nightmare scenario where no vaccine is found and we remain permanently on a tipping point between something like normality and a J.G. Ballard novel, all while keeping our borders closed.

The Government could bring back WorkChoices on steroids and cut company tax to zero, and it’s not going to do much to lift investment, if anything.

The stubborn problem remains that while the virus is a threat, governments — state and federal, but the latter can raise debt most cheaply — will have to fill in part of the missing household demand and shrunken business investment with income support and public investment. Unless we want life on the tipping point to be a long, deep recession.

This article was first published in Crikey