The Bureau of Meteorology issued a road weather alert around 5am, saying reduced visibility in fog would make road conditions dangerous in the Brisbane area.

The RACQ warned motorists to drive with their lights on and allow extra space between vehicles.

A Brisbane Airport Corporation spokesman later confirmed that five domestic flights had been diverted to other airports. Qantas was reporting a “number of delays across the network”. 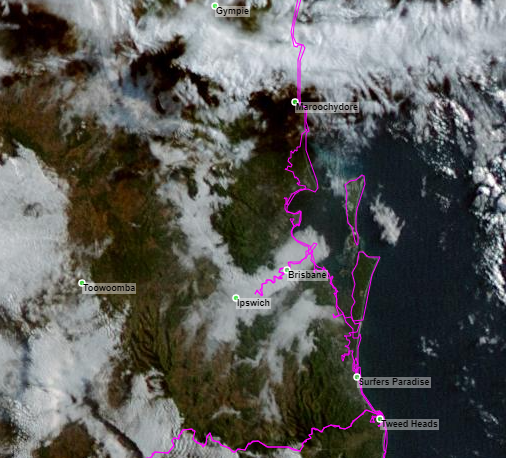 A satellite image of the widespread fog over parts of SEQ. (Image: BOM)

He said said flights were leaving on schedule but there were slight delays to arrivals due to the fog, which finally lifted at about 10am.

Other parts of the state were also affected by fog, with social media users posting scores of pictures from Southbank to Roma.

The BOM said the fog was expected to lift by late morning and forecast a warm sunny afternoon.

“Mainly the south-east and also the western suburbs around Ipswich [got] quite thick fog this morning,” he told the ABC.

“It should start to lift off once the sun comes up properly.”

Kennedy said there was likely more foggy mornings to come.

“Good chances there will be some morning fog, particularly in the west for the next couple of mornings,” he said.