Redland Mayor Karen Williams pleaded guilty to drink-driving on Monday, before saying she would return to work this week and describing the incident as a single lapse of judgment in 18 years of public service.

The 55-year-old drove her vehicle into a tree in Cleveland, southeast of Brisbane, at 8pm on June 23 after leaving the council offices.

She was issued with a notice to appear in court on a charge of driving under the influence of liquor after returning a blood alcohol concentration of 0.177 per cent.

Up to 20 activists protested outside with numbers dwindling when it started to rain. 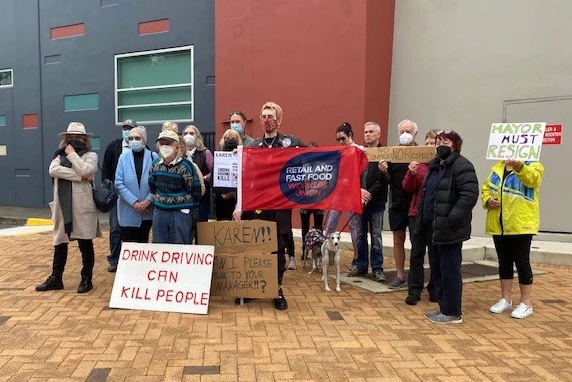 Cleveland magistrate Deborah Vasta sentenced Williams to 80 hours of community service, saying she believed the mayor was deserving of forgiveness and a second chance.

But first she showed a graphic drink-driving awareness video in court, saying it was a regular part of her proceedings for traffic offenders.

So far this year 172 people have been killed on Queensland roads, making it the worst road toll in 30 years, Vasta said.

She also said Williams had paid and will continue to pay very heavily for the mistakes she made that day.

Vasta said Williams had “copped an avalanche of condemnation and vitriol” that included phone messages calling her a “piece of s***” and a “two-faced bitch” and hoping she would go to hell after the incident that occurred hours after an online meeting with families of road crash victims.

There was also a small group of very hurt people who felt betrayed by Williams’ actions, Vasta said.
“It seems to me there’s a very real desire to see your client punished more than an average drink driver, not just because she’s mayor and should be held to a higher standard, but because of what some people see as stunning hypocrisy and betrayal,” she told Williams’ lawyer Calvin Gnech.

Vasta said drink-drivers were usually fined, but there was a genuine feeling many people wanted to see Williams “humbled and punished more than the average person”.

Community service work would balance the condemnation and outrage of people who had been vocal, and the community would see Williams demonstrating her remorse in a physical way.

“It reflects that level of humility that simply paying a fine doesn’t achieve,” Vasta added.

After the sentencing, Deputy Premier and Local Government Minister Steven Miles said he would not take action against the mayor.

“The advice from my department is that there is no reason for any further ministerial action. What happens from here is up to her,” he said.

Williams had four glasses of wine after finalising the council’s budget and not eating since 6pm the previous day.

No one was injured when the council car she was driving left the road, travelled through a fence and struck a tree.

Williams has been on unpaid leave since being given the notice to appear.

Outside court Williams was interrupted by a handful of shouting protesters while she apologised, saying she acknowledged upsetting, disappointing and angering people who had put their trust in her.

Williams – who was elected as a councillor in 2004 and is in her third term as mayor – said she will work very hard to regain the trust of her community when she returns to work this week.

“I will never put my family, my friends, my community and my council colleagues in this position again,” she told reporters.

“This was a single lapse of judgment in 18 years of public service to my community.”

Williams was disqualified from driving for six months and is required to have an interlock device fitted for five years.

No conviction was recorded.