A new study found major storms could pull up vast quantities of sand and sediment from offshore to effectively replenish damaged beaches and drag sand out of the deep and onto the land.

Queensland beaches are among the most susceptible to storm damage, and the state has the highest number of properties in the country at high risk of storm-surge related damage.

Paradise Point on the Gold Coast is classed as the Australian suburb with the greatest amount of property at high risk of being damaged by coastal erosion.

According to Corelogic, Paradise Point has an estimated $1.4 billion worth of property at very high risk of coastal erosion or storm-surge-related damage or loss within a 6.4 square kilometre area within the next 30 to 60 years.

The suburb has 406 homes identified as being at high or very high risk of being damaged by coastal erosion or storm surges. 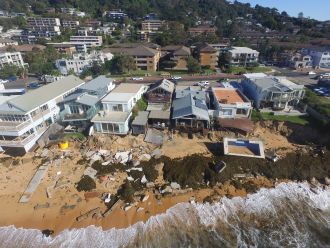 Damage at Narrabeen beach in Sydney after a 2016 storm.

Cronulla in New South Wales is second on the list with eight detached homes and 254 apartments at risk.

Overall, the report found $5.3 billion worth of property has been identified across Australia as being at “very high risk”, with the most in Queensland where 311,148 homes face potential damage from coastal storms.

However, a new international study suggests that over the longer term, extreme weather events could actually help protect beaches from the impact of sea level rise.

The study, led by Dr Mitchell Harley from the University of NSW Water Research Laboratory and published today in the Nature Communications Earth and Environment journal, found the storms could build up barriers to protect land against rising sea levels.

“We know that extreme storms cause major coastal erosion and damage to beachfront properties,” Harley said.

“But for the first time we looked not just above water, where the impacts of extreme storms are easy to see, but also deep down below the water as well.

“What we found was that hundreds of thousands of cubic metres of sand was entering these beach systems during these events – that’s similar to the scale of what engineers use to nourish a beach artificially.

“This could potentially be enough to offset some of the impacts of sea level rises caused by climate change, such as retreating coastlines, and by several decades in the long-term.
“It’s a new way of looking at extreme storms.”

The researchers studied beaches across the world, including Narrabeen beach in Sydney in the wake of a 2016 storm which famously ripped a swimming pool away from a property overlooking the coastline.

Using high-resolution measurements of the beach and seabed, they were able to show that sediment gains were sufficient to theoretically offset decades of projected shoreline retreat.

Harley said the findings showed that long-term projections of sediment movements and how much sand that was lying offshore and could potentially buffer the impacts of sea level rises needed to be considered as part of the impact of extreme storms.

“It further reinforces that we really need to be doing a beach-by-beach understanding of how our beaches are going to change as global sea-level rise continues,” he said.