He managed to get out and a cling to a tree before it went under, but unable to raise the alarm, he spent the night there before being spotted by farmers on Thursday morning.

The man was suffering from hypothermia and was flown by a RACQ LifeFlight Rescue chopper to hospital where he is in a stable condition.

And police are searching for another man who went missing from a campground south of Gympie overnight.

Police said the 36-year-old man was last seen at approximately 11.30pm on Wednesday chasing his dog away from the Yabba Creek Road campsite.

An emergency alert was issued for Toowoomba, where the Cooby Dam is spilling and flooding areas around Cooby Creek.

Toowoomba Regional Council asked residents to warn neighbours and prepare to move to higher ground if the flooding worsened. 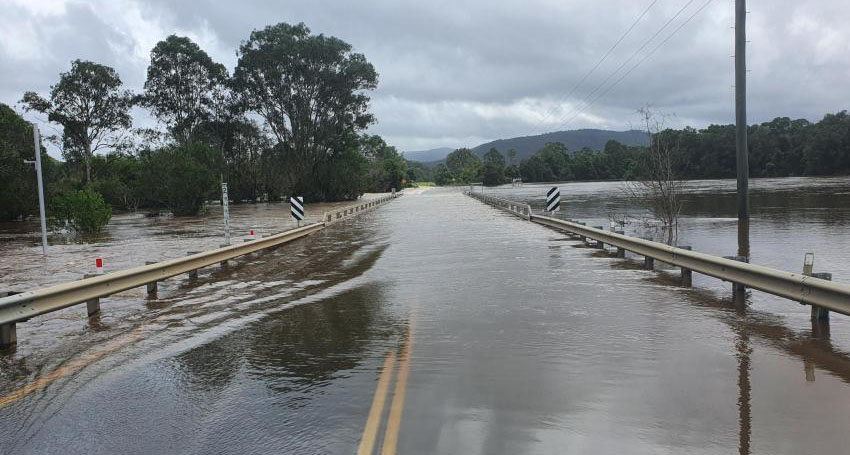 Roads have been cut at Woodford, north of Brisbane. (Image: QFES)

The Bureau of Meteorology warned of heavy rainfall that may lead to flash flooding would hit the Sunshine Coast and Wide Bay on Thursday night. It said falls of up to 160mm in six hours were expected.

To the west, the Bureau of Meteorology is warning Roma, St George, Blackwater, Mitchell, Rolleston and Injune residents of that severe thunderstorms could bring heavy rainfall and flash flooding in coming hours.

Another five people escaped flooded cars in Caboolture, north of Brisbane, and at Imbil, west of Noosa, overnight as rainfall of up 177mm was recorded in some areas in the 24 hours to 4am on Thursday.

A woman in her 30s died in floods near Mackay, in north Queensland, with unseasonal May rain up to 10 times the monthly average lashed on parts of the state.

Queensland Fire and Emergency Services received 114 calls for help in the past 24 hours, mostly in the southeast, as the rainband tracks south.

Despite the massive rainfall, only one home was inundated with ankle-deep floodwater at Kelso, outside Townsville.

Fourteen state schools have closed due to flooding and more than 530 roads have been closed or are impacted.

The Bureau of Meteorology has warned of further heavy rainfall over the next 24-48 hours, which could increase flooding.

“We’re expecting rain areas to continue across parts of central and eastern Queensland and within these rain areas, we could see thunderstorms, which could bring more intense pockets of rainfall as well as damaging winds,” BOM senior forecaster Laura Boekel said on Thursday.

“These rain areas will likely ease from Saturday, where we will see rain activity become more showery over the weekend before easing.”

Emergency services are door-knocking homes in Grantham and villages in the Lockyer Valley, west of Brisbane, where flash flooding is possible on Thursday and Friday.

The BOM had also warned that major flooding could occur along Laidley Creek, with moderate flood warnings on the Bremer, Lockyer and Brisbane rivers on Thursday and Friday.

“We really ask people to pay attention to that. If it’s flooded, forget it,” he told ABC radio on Thursday.

“The consequences as we’ve seen in the last event, and this one, can be absolutely tragic, so please don’t get tempted to try and enter it.

“Don’t think you can judge it. The consequences are disastrous.”

Moderate flooding is also expected along Warrill Creek at Harrisville and Amberley, with minor flooding already along the Upper Brisbane River and major flooding on the Stanley River at Woodford.

The Mary River is set to break its banks at Gympie, north of Brisbane, potentially reaching a moderate flood level of 12m on Thursday afternoon. It would be the third flood to hit the city this year.

The unseasonal deluge is Queensland’s fifth deadly flood since December, which scientists have put down to a second La Nina weather pattern in two years.