Storms struck the Darling Downs mid-afternoon, dumping more than 50 mm of rain in some places while there were reports of at least two tornadoes touching down at Pittsworth and  Bracewell near Gladstone.

The Bureau of Meteorology confirmed the Pittsworth twister, saying it hit at about 10.40 am.

“We are continuing to investigate its strength,” the bureau said in a statement.

It warned of destructive winds, hail and heavy rainfall across a huge swathe of the state from Mackay south to the NSW border.

The bureau warned that, at 3:30 pm, it had detected severe thunderstorms on the radar near Strathpine, Redcliffe, Montville, Bribie Island, Greenbank and Logan Village.

“They are forecast to affect Coolangatta, Beaudesert and the area southwest of Caloundra by 4:00 pm and Brisbane CBD, Caboolture and Wamuran by 4:30 pm,” it said.

“Heavy rainfall that may lead to flash flooding is the main hazard with these storms. Marginally large hail is also possible.”

Earlier, a line of up to six separate storms barrelled in across the Lockyer Valley, Somerset and Scenic Rim council areas, threatening communities in Laidley, Boonah, Blackbutt and Hatton Vale.

“Heavy rainfall that may lead to flash flooding is likely with these storms,” the bureau warned.

“In addition, damaging winds and large hailstones are possible with the storms in the Laidley to Marburg area.” 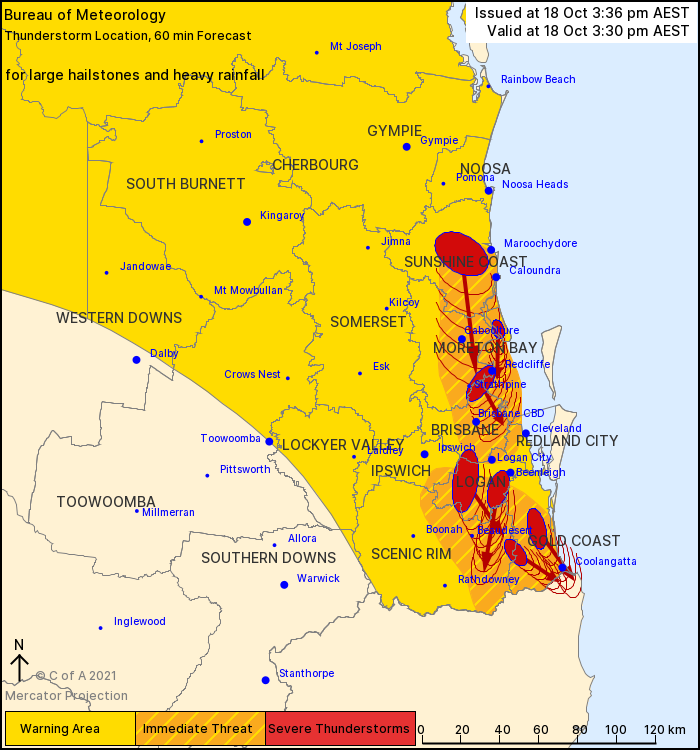 By 3.00 pm the storm front was moving south-east and affecting communities near Boonah and Beaudesert, Bundamba Lagoon and Canungra.

The bureau said they should hit Beaudesert, Greenbank and Redbank Plains by 3:35 pm and Coolangatta, Tamborine and Logan Village by 4:05 pm.

Queensland Fire and Emergency Services  is ramping up its preparations with increased severe weather being experienced across the state, urging all Queenslanders to start preparing for what it says could be a busy season ahead.