But Queensland’s rate of coverage still lags other jurisdictions, something the State Government has blamed on a shortage of vaccines.

As eligibility was extended to children as young as 12 on Monday, Queensland took delivery of another 189,450 Pfizer doses and the government has decided to make it more widely available.

Palaszczuk announced the increased supply meant people aged over 60 could get a Pfizer jab at Queensland Health hubs from this weekend. She recounted how older Queenslanders had asked for a choice of vaccine, and “I say let’s give it to them”.

There are 80 hubs across the state, and Palaszczuk said many would have increased capacity and allow walk-ins on the “super weekend”. She said vulnerable groups would have priority.

In parliament, Palaszczuk would not be drawn on Opposition questions over her own “refusal” to get AstraZeneca – the Premier said she opted for Pfizer due to an imminent overseas trip – and whether it had impacted on public confidence among older Queenslanders.

“The best thing this whole parliament can do is encourage every Queenslander to get vaccinated as quickly and safely as possible,” Palaszczuk said.

While Palaszczuk and other officials are concerned a major COVID-19 outbreak in Queensland is inevitable, the Premier insisted the state’s response to date was the envy of other jurisdictions.

No new cases have been reported in the St Thomas More College cluster, after more than 15,000 tests. Palaszczuk paid tribute to contact tracers and around 1,000 school families in home quarantine, particularly a mother who first raised the alarm. 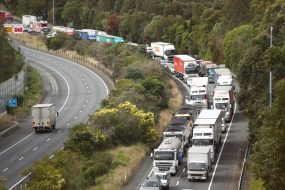 Infected truckies a sign that NSW outbreak is worse than thought: Palaszczuk

“We are frequently told nowhere in the world has stopped the spread of Delta except, at this stage, in Queensland,” Palaszczuk said.

“Those are significant battles, but … there is only one way we win the war and that is to get as many Queenslanders as possible vaccinated.”

Treasurer Cameron Dick suggested the only reason other states were enduring lockdowns and restrictions was because Prime Minister Scott Morrison “botched the vaccine rollout”.

Dick said Queenslanders should seek out vaccines now that the Commonwealth was finally delivering.

“Delta is coming to your door,” Dick told parliament.

“The only way to be safe, and ready, is to get vaccinated.”

Morrison has sought to defend the Commonwealth’s vaccine procurement and distribution strategies, including Pfizer shortages.

“It will allow Australia to further increase the overall size of the COVID-19 vaccination workforce, and to use the many offers of assistance from vaccination administrators and Australia’s business community,” Hunt said.

Tender documents show the Commonwealth wants partners to be able to deliver at least 500 vaccines per week, unless the delivery model or location precludes that, and will be paid a service charge of $21-24 per dose.

Interested parties have been told not to question the proposed milestones, which start with vaccines being administered in the last quarter of 2021, and instead leave it to the Department of Health to advise of any delays.