Palaszczuk responded by noting the Office of the Integrity Commissioner was the subject of a routine independent review, due to be completed by the end of the month, that would report on its powers, responsibilities and relationship with other public sector agencies. 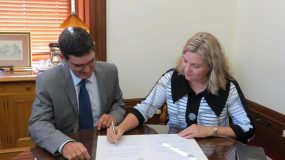 So many questions, so little time to answer matters of Integrity

“Certain matters have been referred to the CCC and it would be inappropriate for me to comment,” Palaszczuk told parliament.

The nature of the allegations being examined by the CCC remain unclear. It has yet to publicly confirm an investigation.

Opposition integrity spokeswoman Fiona Simpson sought and received an assurance from Palaszczuk that no sensitive material would be passed on to her government, but only after being ordered to withdraw an inference that the Premier’s 30-strong team of media advisers might obtain information about whistleblowers.

The Opposition had previously tried to raise similar issues with Stepanov directly while she was giving evidence to a Budget estimates committee hearing. The Integrity Commissioner at the time said she was unaware of any investigation into her office.

Palaszczuk said Stepanov was able to raise any issues with the independent review.

“She takes that position very seriously, and she carries out her job to the best of her abilities,” the Premier said.

“I have a firm belief that she can carry out her job as required to under the Act.”

Palaszczuk vowed to release the report once it had been considered by the government.