The $400 million tower, home to The Star Residences apartments and Dorsett hotel, hit the 178-metre mark ahead of work commencing on the interior fit-out, while building continues on yet another tower on the site – a 63-storey tower, which is on track to be completed in 2024.

The milestone for the Gold Coast projects by The Star and consortium partners Chow Tai Fook Enterprises and Far East Consortium, comes as it was revealed work on Brisbane’s $3.6 billion Queen’s Wharf Brisbane had fallen behind schedule.

The integrated Queen’s Wharf Stage 2 resort in Brisbane’s CBD informed the State Government the opening date had to be pushed back from late next year to the first half of 2023. 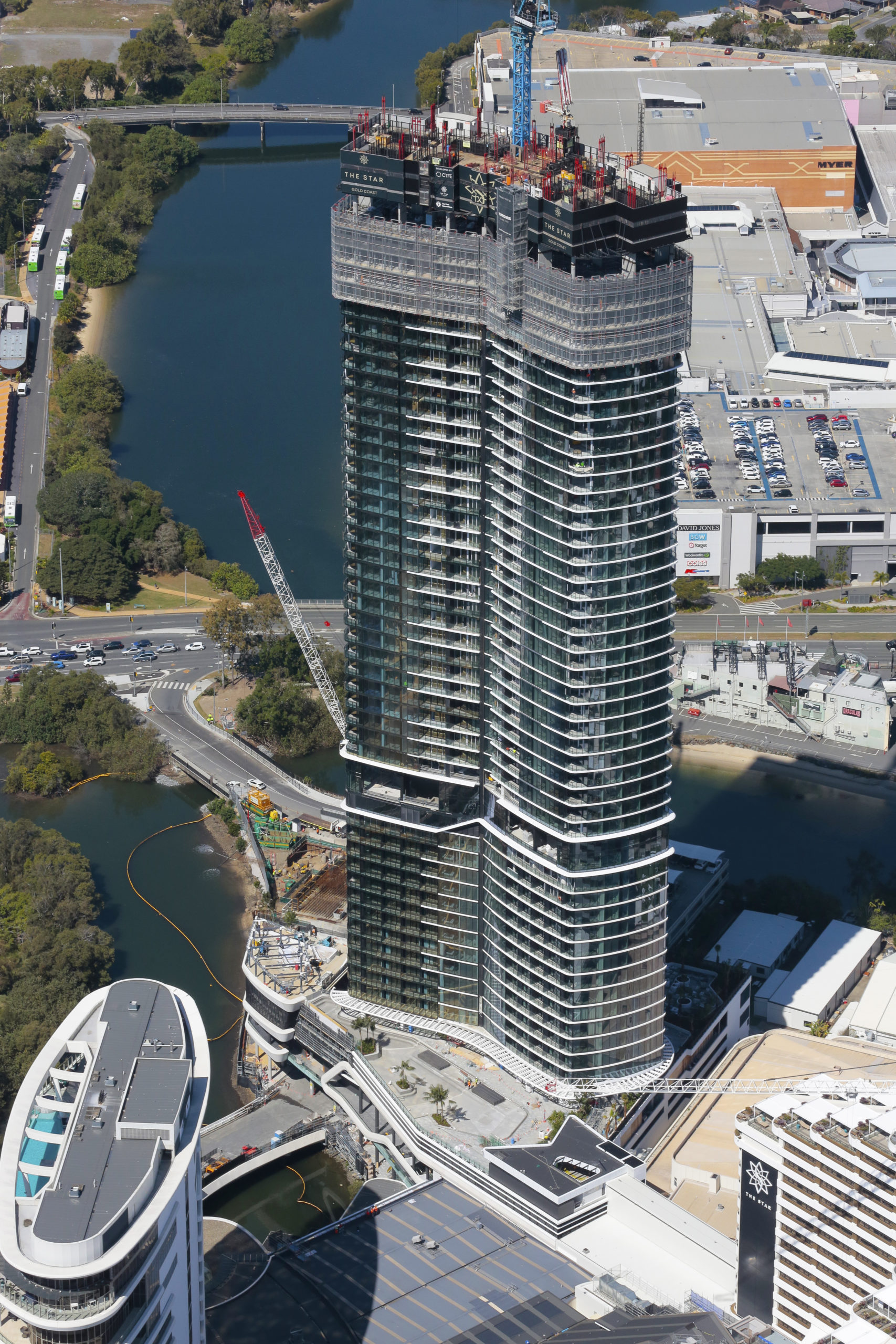 Diminishing construction supplies and supply chain issues are understood to be contributing to the delays on the Brisbane project.

The shortages have had a major impact on the booming construction industry across Queensland, causing havoc to build timelines and spiralling project costs.

Master Builders Queensland revealed some construction companies around the state were stockpiling supplies and taking the extraordinary step of hiring storage warehouses and security guards to guard them so they could meet project timelines.

Destination Gold Coast Consortium Project Director Jaime Cali said the big-budget project, that has increasingly loomed over the Broadbeach skyline since construction began three years ago, was a beacon of confidence in Queensland’s tourism fightback.

“We have also been able to maintain targets by using local south-east Queensland and Australian manufacturers and suppliers wherever possible to reduce the risk of supply chain issues,” Cali said.

More than 90 per cent, or 393 of the available apartments in the new tower, have already sold.

The tower features 422 one and two-bedroom apartments. The 313-room Dorsett hotel will occupy the first 21 floors, including a six-level podium that will house the hotel reception and lobby.

It is the first time that residents will be able to live at a casino integrated resort.

Chief Operating Officer of The Star Gold Coast Jess Mellor said the top-out milestone demonstrated The Star’s commitment and contribution to the tourism resilience of the Gold Coast.

“We are proud to have been able to provide 1,500 jobs during construction as well as hundreds of supply chain opportunities for businesses, supporting economic stimulus in the city during such challenging times,” she said.

The next tower being built on the site is expected to be completed in 2024 and will join the The Star Residences and Dorset tower, along with the existing five-star The Star Grand hotel and the luxury all- suite hotel The Darling.

Around 80 per cent or 370 apartments in the next tower have already been already snapped up by buyers.