The Bureau of Meteorology briefed Cabinet on Monday about the long-term weather forecast for Queensland.

Premier Annastacia Palaszczuk said the government was dealing with the health emergency of COVID-19 while preparing for potential bushfires over summer and any flooding.

“A lot of rainfall is due for the south-east,” Palaszczuk said, of the months leading up to Christmas.

The Bureau of Meteorology expects rainfall to be above the median for much of eastern Australia in this September to November outlook. (Supplied)

“Whilst it will not be as significant as 2010-11, they are predicting rainfall similar to that rainfall event but not as severe. That is great news. Cabinet will get another update in October in preparation for our cyclone season. I commend all of our staff employed across the state who serve our state well and are always on duty and prepared to combat any natural disaster that comes our way.” 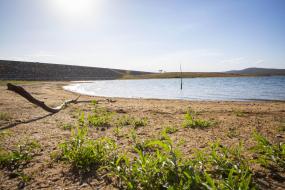 The bureau already has one of the largest radar networks in the world, but is planning to make it even bigger. It is looking for suppliers to deliver 40-50 new radars in the coming years at existing and greenfield sites.

It remains to be seen whether the forecast rain falls in the catchment areas for the major dams in south-east Queensland. Dam levels have already prompted several water reviews, ranging from the need to alter how water restrictions are managed to ensuring recycled water is available once the dams get too low.

At the same time, in Queensland, maximum temperatures will be above median for the northern tropics, but below median in the south during the day.

Nationally, it has been the wettest winter since 2016, yet combined south-east Queensland dam levels are at 58 per cent and falling.

The government expects a report by the end of the year on whether the long-touted Bradfield scheme, redirecting water from large and flooded north Queensland rivers, could have modern applications.

Meanwhile, a Large Aerial Tanker has arrived in Bundaberg ahead of bushfire season, and after criticism of efforts to combat the K’gari (Fraser Island) fire last year. Palaszczuk said the bureau expected conditions to remain dry in the Wide Bay region for months.