Last year, when Queenslanders were forced to the polls at least twice – council elections in March and the state election in October – the ECQ had to accommodate the pandemic in their planning.

Not only were polling booths made safer, and pre-poll and postal voting actively encouraged, but people who failed to vote were initially given benefit of the doubt.

“This response includes several steps ensuring electors can engage with the ECQ and disclose their reason for not voting,” a spokeswoman said.

For around 132,000 people who, for the first time, failed to vote at the state election, the ECQ did not take any action. Another 61,000 or so had already failed to vote in a previous election so were sent a warning letter.

Of the 57,722 voters who had not participated in three or more elections, 43,687 ended up being sent a Penalty Infringement Notice of $133. The majority of those, 36,329, still failed to respond in time, so were referred to the State Penalties Enforcement Registry – which adds a $73.80 fee to their fine under threat of even tougher action if it goes unpaid.

If every one of the 57,722 people pays up, the ECQ stands to recover around $8.5 million that will go into general state government revenue. SPER is already dealing with much larger recovery operations involving COVID-19 fines and accommodation charges, in addition to normal government business. 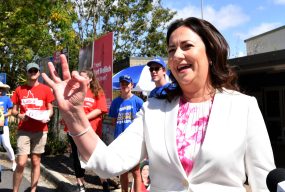 Last year, for the first time, the proportion of votes lodged ahead of the election days surpassed those lodged on the day, helping to reach a participation rate of 87.92 per cent at the state election – marginally higher than the 2017 state election turnout, and with fewer informal votes (3.40 per cent).

The federal election is due within months. At the last federal election, one in 10 Queenslanders did not bother to vote (the participation rate in the state was 91.22 per cent) and of those who did, almost one in 20 (4.95 per cent) did it wrong.