NSW Police and Emergency Services Minister David Elliot said around 1,000 “selfish” anti-lockdown protesters who stormed the border risked extending the strict lockdown in NSW that has so far severely cut the number of people allowed to cross into Queensland and crippled border businesses.

Elliot said most NSW residents were “sick and tired of the abhorrent actions of the minority” who were risking public safety by potentially spreading the virus, and vowed the anti-lockdown protesters would continue to be identified and charged.

“It is disappointing that people in our community continue to put others’ lives in danger by attending mass gatherings in the current climate,” Roptell said.

Only one person was arrested on the Queensland side of the border – a man who threw eggs into the crowd to fire up the protesters.

Queensland Premier Annastacia Palaszczuk said she was disappointed by the protest, and worried that so many people were flouting the NSW stay-at-home orders.

While she understood frustration at the coast being divided, Palaszczuk said it was the NSW Government that had refused to shift the border further south and anyone concerned should take it up with them.

“We have tried,” Palaszczuk said, while emphasising her concern that the Delta variant could be brought into Queensland at any time.

Gold Coast acting Chief Superintendent Rhys Wildman said specialist police had been ordered to the border in case the protest turned violent following demonstrations across the weekend in Melbourne, Sydney and Brisbane.

Nine police officers were hospitalised after 5,000 protesters flooded Melbourne’s CBD on Saturday. Victoria Police described the rally as one of the most violent demonstrations in 20 years.

Wildman said while Sunday’s border protest remained peaceful, NSW border hoppers could potentially have infected Queenslanders during the protest by bringing the delta strain that has swept NSW to the Gold Coast.

“We had a large number of people coming in from NSW and we also had a contingent of Queenslanders and they intermingled during the protest,” he said.

“There’s a bigger picture in this and that’s around the delta strain, it is circulating in NSW and obviously we don’t want to put our Queenslanders at risk.”

He said police on both sides of the border would work together to track down those who flouted the restrictions.

“We have identified a number of individuals who are of interest to us, and we will be making enquiries this week to chase those particular individuals up and take appropriate action,” he said. 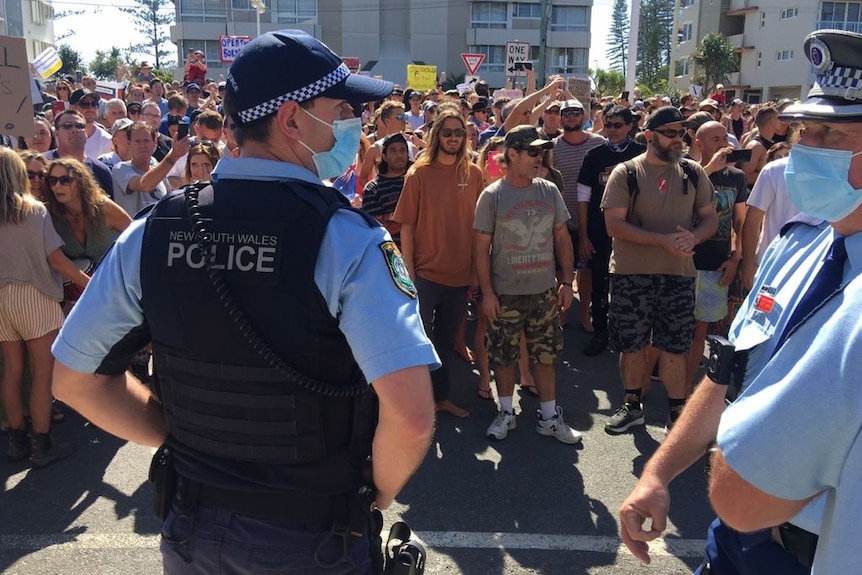 Up to 1000 protestors attended a rally at the Qld-NSW border with more arrests likely to follow. (Photo: ABC North Coast: Hannah Ross)

Wildman said the man who took to his horse was “reckless”, riding through the crowd while trying to whip the crowd up into a frenzy. “That’s not something we would expect in a normal protest-type situation,” he said.

Wildman said new rules from 1:00am Saturday further restricted the number of people who were allowed into Queensland, meaning only emergency workers who had received at least one vaccination shot were allowed in.

Vaccination is now a prerequisite for essential workers crossing the border. Police overnight refused entry to 154 vehicles, for not meeting the requirements, however none of the 210 essential workers who sought to cross were denied entry.

Queensland Health today confirmed a motorist previously turned around at a border checkpoint further west had since been diagnosed with COVID-19.