Prime Minister Scott Morrison and Premier Annastacia Palaszczuk yesterday signed a Memorandum of Understanding to proceed with the Pinkenba quarantine facility. It followed the Queensland Government on Friday signing a separate MOU, only for the Commonwealth to say it was out of date, which may be an early indicator of the difficulties expected with this particular project.

After the Commonwealth ruled out supporting Queensland’s pitch for a privately-built quarantine facility next to Toowoomba’s Wellcamp Airport, due primarily to the distance from tertiary hospitals, it proposed Damascus Barracks at Meeandah.

Part of the 30ha barracks at Pinkenba, next to Brisbane Airport, had previously been converted into an immigration detention facility, however the pandemic-era development would deliver the largest phase of work on site since World War II.

Under the proposal, the Commonwealth would build the 1,000-bed facility, which would be run by Queensland, initially providing surge capacity to bring back more Australians stranded overseas. It follows a similar arrangement with the Victorian Government for a facility in Melbourne’s north.

Unlike hotels currently used for quarantine, the new facility would be purpose-built, with accommodation separated and with airflow design to reduce the risk of the more contagious Delta variant of COVID-19 drifting between rooms.

While the barracks is not a greenfield site, a feasibility study commissioned by the governments found it was suitable and, subject to further investigations, should go ahead.

However, InQueensland has learned the study also raised numerous challenges, and problems, with the chosen site. If the problems cannot be dealt with, they will trigger planning approval processes that could delay the project.

On almost every front, the build is complex, and more so than the Melbourne facility, which was used as a comparator for the study.

For example, being next to a major airport will require noise mitigation, meaning normal demountable accommodation is unsuitable and units will need to be constructed from heavier materials, subject to availability.

However, the soil in the north-west corner of the site, earmarked for the development, already has significant unspecified in-fill from decades of use as a Defence storage and disposal facility. Normally, that would require more extensive foundations, however the study recommends earthworks be avoided wherever possible, lest they lead to contaminated run-off into surrounding areas, wetlands and the Brisbane River.

The feasibility study has confirmed the presence of hydrocarbons, asbestos, heavy metals and probably PFAS (firefighting foam may have been stored on the site, which has not previously been investigated for such chemical contamination). 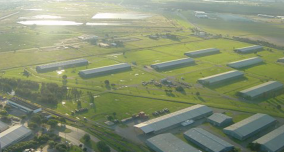 While the site currently floods, there is greater risk of inundation from on-site dams, which Defence used for waste disposal, than external sources.

The Queensland Government continues to advocate the Wellcamp project which it argues could, with Pinkenba, remove the need for hotels to be used for quarantine. However, the Commonwealth will not fund Wellcamp, and instead push ahead with Pinkenba.

“Unlike previous state suggestions, this site is appropriately close to Brisbane international airport and all necessary medical facilities,” Finance Minister Simon Birmingham said through a spokesman on Monday.

“Now that both governments have signed an MOU the Australian government can get on with building it,” Miles said on Monday.

The Pinkenba site comes under Commonwealth planning laws, which may allow some approvals to be expedited, however the environment and heritage aspects still loom large. Defence had already planned upgrades on other parts of the barracks but may still have to relocate equipment.

If built, the facility will be known as the Queensland Centre for National Resilience. Staff will not be housed on-site, at this stage, and the health arrangements have yet to be outlined.