The wins mean Australia’s gold medal tally in Tokyo has reached 17, equal to the nation’s best ever Olympic hail in Athens in 2004.

However, it was not going all Australia’s way in Tokyo, with the Boomers basketball team defeated by rivals USA in the semi-final after leading the game into half time.

They got off to a flying start and led for the entire race, just managing to hold off the charging German pair with the Czech Republic’s Radek Slouf and Josef Dostal taking bronze

Green and van der Westhuyzen had surprised themselves by posting an Olympic record in their heat.

Only recently emerged from junior ranks and with international racing curtailed for the past two years by COVID-19, they said after that race they weren’t sure how they would stack up.

The pair are based in Queensland, with Cape Town-born van der Westhuyzen moving from South Africa to Australia in 2018 to pursue his sprint canoe career. 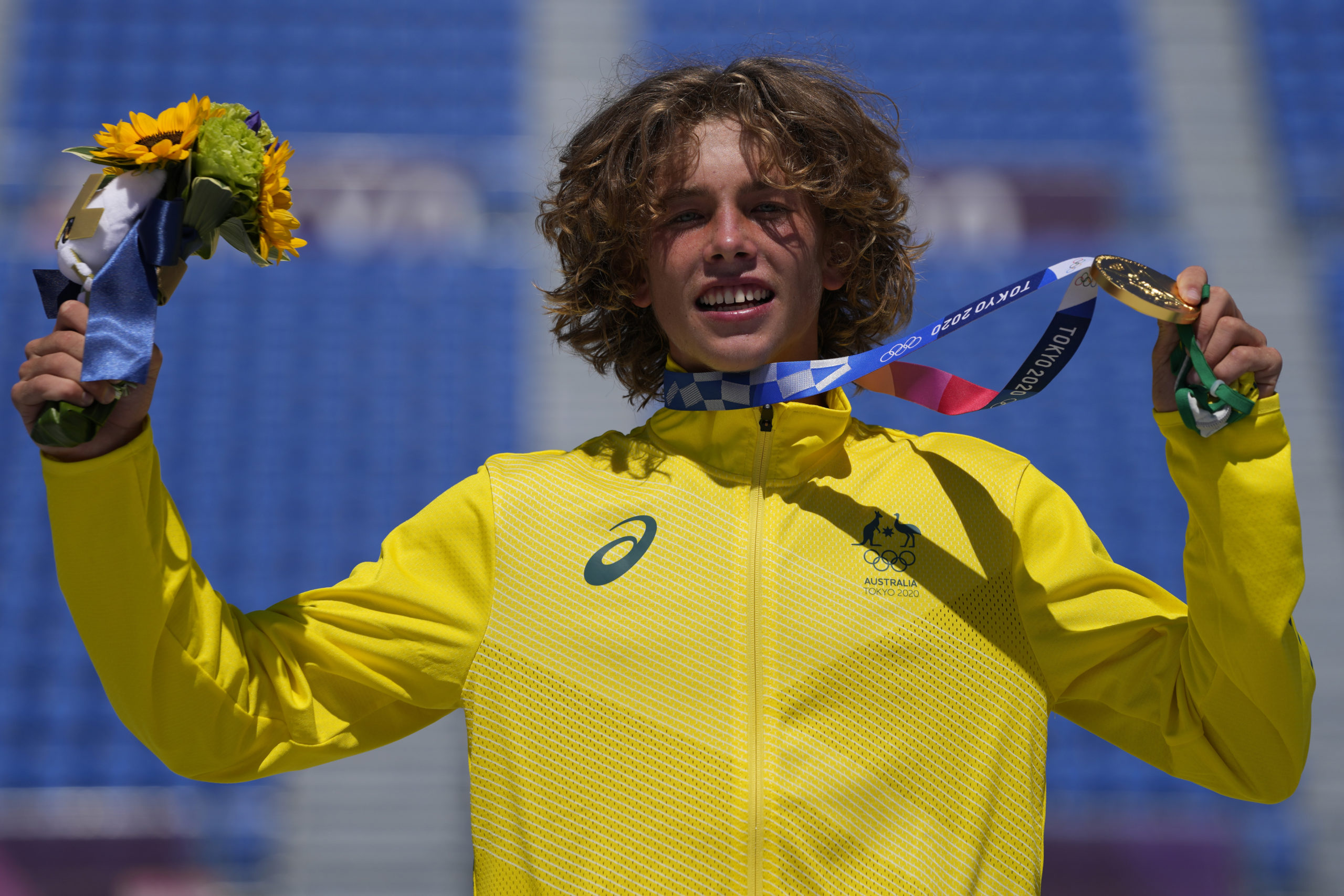 Keegan Palmer with the medal which meant Australia matched its greatest gold haul at an Olympics. (AP Photo/Ben Curtis)

Skater Palmer won gold in the men’s park to become the first Australian to win an Olympic medal in skateboarding.

Palmer, who was born in the US and raised in Australia, produced an epic 95.83 with his last ride in the final to completely obliterate the opposition and secure Australia’s 16th gold medal of the Tokyo Games.

So dominant was the 18-year-old that the second highest of his three rides in the final – a 94.04 – would have also been good enough to win gold.

The win ensured he become the youngest Australian to win a medal in Tokyo.

Brazil’s Pedro Barros claimed silver with a score of 86.14 with American world No.2 Cory Juneau taking bronze with 84.13.

“That is a such a huge honour and I am so grateful that I was able to do it for Australia,” said Palmer, who was born in the US, raised in Australia, and now lives in San Diego.

“It means the world to me because it’s where everything started for me. I’m so grateful and I just can’t believe it.”

Palmer was quick out of the gates, laying down a scarcely believable 94.04 with the first of his three runs in the eight-man final.

It was a new benchmark for the world No.7, with no rider even getting close to a 90 in the preliminary round.

The battle for the minor medals was intense – Brazil’s Pedro Barros claiming silver with a score of 86.14 and American world No.2 Cory Juneau taking bronze with 84.13.

But no-one could get close to Palmer, and just to re-assert his dominance over the field, he pulled out a 95.83 with his final ride to leave no questions as to who the rider of the day was.

“I wasn’t too nervous going into this one, I felt confident,” Palmer said with his thick American accent.

“I’m just so honoured to be standing here with those two guys – Pedro and Cory, I’ve known them since I was nine years old.

“Ten years later now we’re standing on an Olympic podium together, I just can’t believe it.”

Palmer was almost joined on the podium by Woolley.

Woolley had set the competition alight during the preliminary rounds when he posted the second-highest score to qualify for the final – the qualifiers claiming the scalp of world No.1 and reigning world champion Heimana Reynolds .