The training was introduced after former Liberal staffer Brittany Higgins alleged she was raped inside Parliament House.

At the time, Home Affairs Minister Karen Andrews said she’d had a gutful of the workplace culture in parliament.

As reported by InQueensland last week, the one-hour training sessions will be optional for politicians.

“I would be encouraging every single politician in this building to make sure they at least attend that hour of training,” she said. 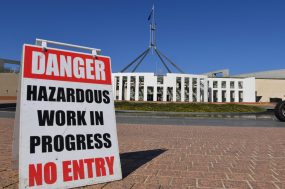 “I will be making sure I am attending, they should go out and do that.

“That will be a pretty clear demonstration of their commitment, and they should be held to that.”

Jenkins has so far been contacted by 345 participants, almost three-quarters of them women.

The overwhelming majority of participants work or have worked for Commonwealth politicians.

Sixteen current or former federal parliamentarians have come forward to share their stories, along with eight volunteers, interns or students.