A parliamentary inquiry into serious vilification and hate crimes has heard incidents are increasing and the Palaszczuk government needs to strengthen laws and improve services.

In a newly released submission to the inquiry, the Multicultural Queensland Advisory Council has criticised the current laws, even going so far as to suggest they reflect a lack of concern by authorities.

The council advises the Minister for Multicultural Affairs, relaying any community concerns to her to then raise within government or Cabinet.

But it has used its submission to argue that victims do not feel supported because “Queensland’s vilification laws contain legal and practical challenges at every step in the complaints process”.

Without agreeing to sweeping reforms, to better support victims, the government would only “further entrench inequality, injustice and their sense of isolation, and pose a threat to the rule of law in Queensland and Australia”.

“We know this not just by listening to our multicultural community, but also by looking at how the law in other areas reflects our values. As an example, where an assault is perpetrated on a police officer or a paramedic, our laws rightly provide for significantly increased sentences and penalties. This is because we as a society recognise that violence against our first responders poses a particular risk to their health and wellbeing, and is therefore something that should be especially deterred and punished.” 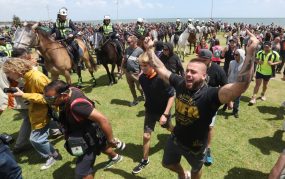 Minister Leanne Linard added a page to the advisory council’s submission, to endorse its role in representing communities across Queensland.

“Council members are therefore extremely well placed to provide advice to the Legal Affairs and Safety Committee on the nature and extent of vilification and hate crimes as they impact culturally diverse cohorts,” Linard said.

“This includes the shortcomings of current legislation and how it plays out in practical terms at the community level. I would like to thank the Council for working together on this submission, which represents the views and learnings of members based on their respective areas of influence and the culturally diverse Queenslanders they engage and work with.

“These are their words.”