Labor won 52 seats at the election – Stretton is now subject to a by-election after the death of incumbent Duncan Pegg – while the Liberal National Party only managed to secure 34.

Of the remaining seats in Queensland’s unicameral parliament, Katter’s Australian Party has three, the Greens have two for the first time, with a single One Nation MP and an independent making up the numbers.

For their efforts, the major parties generally stand to benefit most from public funding, which helps reimburse them for the cost of campaigning (even if it has been funded upfront through donations and membership fees). Critics argue the system favours the established players, and fringe parties usually fail to meet the eligibility criteria.

Election funding is not distributed according to seats won – for example, One Nation had a bad result last year yet will reap twice as much money as Katter’s Australian Party – but rather a complex formula that requires the parties to keep receipts.

Parties and candidates who win more than six per cent of the formal first preference vote have to apply for reimbursement of campaign expenditure up to a certain point, based on an indexed dollar value per vote.

After winning a second seat in parliament for the first time, the Greens will get $1,190,280.19 in funding, combined, which will only partially compensate for the party never being able to raise as much money as the majors. 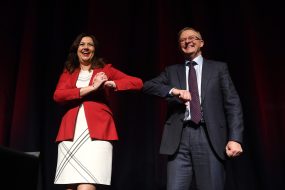 While the funding technically relates to past activities, it will provide a timely boost for the parties, with the federal election due within months and Queensland seats always hotly contested.

In another bonus, the Stretton state by-election on July 24 will be based on a more lucrative formula – the amount paid per vote will increase, to $1.679 for candidates and $3.361 for parties, before a more substantial jump in time for the 2024 state election.

The Palasczcuk Government has embarked on a series of electoral reforms intended to remove the integrity risks associated with donations, through restrictions and ultimately caps, and provide more public funding. Yet Labor, like the LNP, continues to run controversial events linking donors with frontbenchers for meetings, and has staff dedicated to drumming up more donations.

From mid-2022, the amount paid per vote will rise to $3 for candidate and $6 for parties while the threshold will be reduced to four per cent.